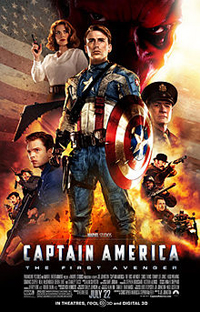 So ends the longest set of introductions (three years) on film since Chevy Chase and Dan Aykroyd stood inside a medical tent in Spies Like Us, greeting the camp’s legion of Doctors.

Captain America: The First Avenger rounds out the dramatis personae in Marvel’s super- super franchise. With the release of this fifth film, following Iron Man, The Incredible Hulk, Iron Man 2 and Thor, perhaps now’s the perfect time to reflect on the studio’s ambitious attempt at cross pollinating movie synergy.

A common complaint you used to hear about comic book movies was that they were never reverential enough toward the source material. Marvel’s decision to adapt its own properties for the big screen looked to solve that problem. After all, if Marvel couldn’t make those panels come to life, who could? Unfortunately, though each adaptation has been entertaining, the inescapable conclusion after five movies is that not one of them has managed to transcend b-movie status. There’s nothing wrong with the second tier of course, but it used to be a lot more inventive than this.

There’s a not a single film in Marvel’s photochemical maelstrom to compare with the scope and grandeur of Richard Donner’s Superman, or the stylised grotesquery of Tim Burton’s 1989 Batman adaptation. Fanboys may have found the few liberties taken with their favourite characters refreshing, comforting even, but for the uninitiated the lack of risk, perhaps trust invested in filmmakers, and one thinks of movies like Sam Raimi’s Darkman as a notable contrast, has made each origin tale a fun but slight affair. Where are the iconic moments in these movies; the classic lines, the signature set pieces, the golden cues? Brand awareness is high but surely that wasn’t the limit of the new studio’s ambition?

CATFA has its predecessor’s problems and a few of its own. What’s striking about it is its sheer lifelessness; an action adventure by rote that begs for more soap opera complications; the kind teased but subordinated to computer generated mayhem. It’s a film that’s better designed that written, better played than the threadbare characterisation demands, but overproduced – in bytes not blows, when real world pyrotechnics and classic technique would have better served its period setting and pulp ambitions.

Joe Johnston, the only director chosen by Marvel who has bona fide experience in the genre and a sensibility to match the story’s architecture, does his upmost to imbue the proceedings with some old school knockabout fun, and for a while he succeeds, turning in something that despite its CGI plates, has the feel of a classic matinee adventure. However, in the second half the movie falters, losing both its shape and momentum.

Elements that might have saved it; focused villainy rather than megalomaniac abstraction, the relationship between the titular super-solider, love interest Hayley Atwell and potential rival Howard Stark, father of Iron Man’s Tony, are abandoned. What’s left? Nothing of consequence; a series of fights and explosions, action schlock flopped over the last hour. Enjoyment is replaced by indifference, involvement by daydreaming. In terms of character development the half way mark heralds a series of terminations. It’s a shame, because you were growing to like this troupe.

It’s the last line of Chris Evans, well cast as an earnest, if humourless Übermensch, that hints at the film that might have been. “I had a date”, he tells the returning Samuel L. Jackson, who’s just broken the news that the patriotic lug has been frozen for 70 years. So he did, but where was the human interest in the second half that would give that line some weight?

Evan’s Captain America was the big hearted streak of urine that grew up being ignored by women. Bulked up and full of confidence he’s finally secured the attention of a stunner; the sumptuous Atwell, but a few awkward exchanges and a never used love rival do not an engaging romance make. Informed by the need to make something more action oriented and visually pregnant, in hoc to an imaginary audience of furiously masturbating teenage boys, the filmmakers forgot to make a film. Consequently Captain America is a diversion, not a movie; a product with more than a hint of committee style box ticking behind it, and that’s unfortunate because a good cast and period backdrop, rife with intriguing possibilities, deserved better treatment.

It now falls to Joss Whedon (gulp) and The Avengers to retroactively justify these missed opportunities with an epic and satisfying pay off. With several principle characters and the crushing weight of expectation bearing down on his modest shoulders, it’ll be interesting to see if Whedon, in his capacity as both writer and director, can finally add some colour to Marvel’s beige canvas. Place your bets.