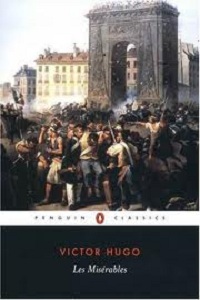 Yes, I’m attempting to review Les Miserables, in around 1000 words. I’m going there.

I think the thing I loved most about Les Miserables, apart from the fact that someone managed to make a musical out of it, is that Hugo persistently does everything we were told not to do in creative writing class. Obviously Hugo has an excuse in the fact that creative writing class wasn’t invented when he was writing, but for the rest of us, writing an epic on the scale of Les Miserables is probably out of the question. I’m sure that if I ever get around to writing that novel I know I have in me, and send it to the publishers, the first thing that will get cut is the 40 page passage on convents. The edition of Les Miserables that I read actually cut some of the irrelevant material out, and put it in an appendix at the end. I don’t usually agree with doing things like that, but in this instance, thank-you Penguin, because by the time I got to page 1060 and he started going off on one about Parisian sewers, I almost lost the will to live.

On the subject of creative writing ‘rules,’ I find myself reminded of an argument I once had with a woman on the Amazon comments for Wuthering Heights (I’d like to say that this isn’t a common occurrence, but I run on a short fuse). She claimed to be a creative writing teacher, and said that Wuthering Heights wasn’t very good because there were no likeable characters that the reader could identify with. Apart from showing an astonishing assumption that ill-mannered, uncouth Yorkshire men nursing weird, semi-incestuous love for their adopted sisters are an impossibility, it exasperated me because I don’t really want to read about characters I identify with all the time. Life is full of people who we don’t agree with, like or understand. Often they are the most interesting people we will ever meet, so I want my literary life to be full of them too. That isn’t to say that creative writing class is a bad thing, but just make sure you find a good one. My last teacher’s most memorable piece of wisdom was ‘use less Latin derived words and more Anglo-Saxon ones.’

So, I am reliably informed by Wikipedia that this novel covers a seventeen year period. The main core of the story regards Jean Valjean, the novel begining with his release from prison, and his attempts to reform and make something of his life. Valjean, however, cannot escape his dark past; even when under an assumed name he rises to Mayor of Montreuil-Sur-Mer. Here he becomes entangled with Fantine, a fallen woman turned prostitute whose little daughter, Cosette, is lodging with and being ill treated by, the villainous Thénardiers. Javert, inspector of police, is suspicious of Valjean, despite his high social status. This is really just the beginning of things, and the novel goes to cover the history of Paris, the nature of justice, the fate of the poor, romantic love, moral philosophy, and revolution. Valjean is branded a criminal for life, simply for reaching out his hand to take a loaf of bread when he was starving.

Les Miserables is, amongst other things, famous for its digressions. These are things that Hugo just felt like writing about and unapologetically shoe-horned into the book. I have endured a 60 page digression on the Battle of Waterloo, 40 pages on convents, 20 pages on sewers, and all kinds of long chapters on various things that are not important to the story. Perhaps it would be easier to forgive Hugo these digressions if he didn’t place them right in the middle of the action, usually leaving Valjean teetering on the brink of catastrophe, closely pursued by Javert. Based on the quality of his writing, I certainly do, because it is incredible. In my favourite chapter, ‘Javert in disarray’, Hugo captures perfectly the inner turmoil and horror of a character who previously appeared two dimensional and rigid, as Javert realises that his pursuit of Valjean has become warped, and such a necessary, central part of his life that it is in fact Valjean in control.

Also very important to the novel is coincidence. As long as you bear in mind that wherever Valjean goes, and whatever he does, even in the labyrinth that is Paris, Javert will accidentally become involved, then you will perhaps avoid the emotional roller-coaster that I experienced. Also, Hugo likes to tease his readers, by introducing Valjean under a series of disguises and false identities, and letting us guess it is him. But really, how stupid does he think we are? The coincidences extend further to engulf the whole narrative, and when Marius (law student, Cosette’s love interest) moves in next door to the Thénardiers (the VILLANS), the reader might be forgiven for throwing up their hands and exclaiming ‘In Paris? Seriously? It’s massive!’ I however love coincidences, and they are my favourite part of any nineteenth century novel.

The experience of reading Les Miserables is akin to that of any lengthy novel. For hundreds of pages you’ll be hooked, dazzled, unable to put it down (except when your arm goes to sleep. Never have I been so sold on the idea of owning a Kindle.) Then you’ll hit a bit that doesn’t interest you, put it down, start reading something else, and find it almost impossible to pick it up again. I almost gave up reading it at 900 pages, when Hugo suddenly, after leaving Marius and Cosette in love and about to be parted, turns his attentions to a group of revolutionary students, minor characters that I care NOTHING about. I had a tantrum, and threw Les Miserables down, bitterly reminded of when I was reading War and Peace and only interested in the stuff to do with Natasha, and the war bits. I came crawling back a couple of weeks later though, because I only had three hundred pages left, and I want to be able to tell people I’ve read Les Miserables.

Year of Publication: 2003 (This Edition)