‘Counter-Insurgency on the Cheap’

It takes a brave man to enter a warzone; it takes a braver man to enter a warzone clutching a camera instead of a gun. For most of his long career, photographer Tim Hetherington has been documenting life in some of the world’s most destructive and bloody conflicts. Spending eight years in war-torn West Africa, Hetherington, a veteran of both the Sierra Leone and Liberian civil wars – the latter of which saw him earn the unenviable honour of being one of only a handful of journalists to live with the rebel army – is arguably more battle-hardened than many of the soldiers he accompanies. His latest work, the feature length documentary Restrepo – a collaboration with Sebastian Junger, a reporter best known as author of The Perfect Storm – sees Hetherington take on his third directorial role to document yet another controversial conflict – the war in Afghanistan. 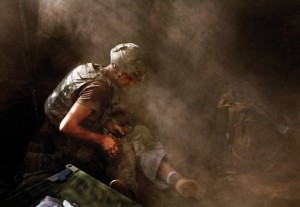 Embedded with the American troops of Second Platoon, Battle Company in the remote Korangal valley, Hetherington and Junger were initially on an article assignment for Vanity Fair, for whom both men are contributors. ‘I thought it would be pretty quiet,’ says Hetherington. ‘Like everybody else, I was focussed more on the war in Iraq.’ But, Hetherington’s expectations were wildly out of sync with the reality of life in the Korangal – a rocky, six-mile stretch dubbed the ‘Valley of Death’ by US forces.

‘The statistics were pretty astonishing,’ he says. ‘By the end of October 2007, a fifth of fighting in the country, across all coalition forces, was taking place in the valley. 70% of American bombs being dropped in Afghanistan were being dropped in the Korangal. Battle Company, the guys we were with, were facing a casualty rate of 25%. It was obvious that the war had slipped out of control,’

Hetherington and Junger resolved to create Restrepo­ – the title comes from the name of a young medic, Juan Restrepo, killed early in the platoon’s deployment – as a way to document the reality of the situation in Afghanistan. ‘The objective was to make the most visceral and immersive war film we could,’ says Hetherington, ‘to really take the viewer into a ninety minute deployment, bring them as close as we possibly could to the experience of the soldier.’

Rather than critique American grand strategy in Afghanistan, Restrepo never moves away from the ground-level experience of warfare, a fact Hetherington is noticeably proud of. ‘We take the viewer into the valley and inside the soldiers’ experience,’ he says. ‘Soldiers don’t get to question politicians and neither did we, and soldiers don’t get to talk to the generals and ask “why are we fighting in the Korangal?” So neither did we.’

Of course, the platoon were i 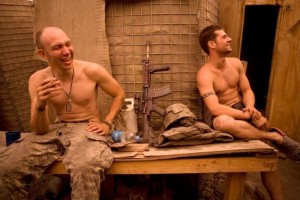 nitially wary of the two reporters thrust into their midst, a fact Hetherington seems reassured by. ‘The relationship between the military and the press is prickly,’ he says, ‘and so it should be. For democratic purposes it needs to be; the press is there to interrogate the military.’ In the end, it was the two men’s dedication that earned the soldiers’ respect.

‘We did a total of ten months with the guys to make the film – five months each – and, to all intents and purposes, became part of the platoon,’ says Hetherington. ‘We ate their food, we slept where they slept, we went on every patrol, and we went into every combat situation. When they saw we were going to go to the furthest extremes with them, they opened up in an incredible way.’

But, faced with such a mammoth task – the standard length of an embedment is three weeks – Hetherington admits there were points when his resolve to finish Restrepo was questioned. ‘There are always times when you’re doing this type of work where you have moments of doubt,’ he says. His darkest moment came during Operation Rock Avalanche – an American push deep into the Taliban-occupied area of the valley. ‘Towards the end of that I broke my leg,’ says Hetherington, ‘and found myself having to walk down a mountain with a broken leg, carrying a sixty-pound pack… The insurgents had killed and wounded people a couple of days before, so I’m thinking “you know, I’m not in a very good situation,”’ he says with a wry laugh. 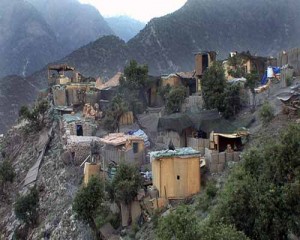 That unswerving dedication certainly seems to have paid off. By documenting every nuance of combat life – even down to the dirty but necessary task of burning excrement – Hetherington and Junger have crafted one of the most in-depth portrayals of soldierly life ever committed to celluloid. ‘I’ve been with lots of groups of soldiers before, lots of armies,’ says Hetherington, ‘but the intimacy with these guys is definitely unique.’

One of the most startling revelations Restrepo makes is just how different a real-life firefight is from the bombastic Hollywood version of combat. From a ferocious opening-scene I.E.D. attack to the tension-filled close-quarters fighting of Operation Rock Avalanche, Restrepo’s scenes of combat are visceral, draining, and utterly confusing. Still, filming them, according to Hetherington, was relatively straightforward. ‘I think about it in a limited way,’ he says. ‘I understand you can get shot and, like soldiers, the first thing I do is take cover and then I get my head together and start filming.’

Restrepo may offer an unfiltered view 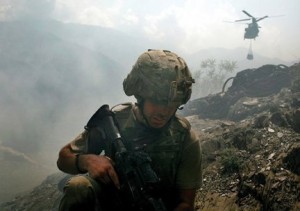 of life in a warzone – blood, bullets, bombs and all – but the directors resist showing the ultimate effect of warfare – death – a decision that Hetherington is vehement in his defence of. ‘I had some very graphic images,’ he says, ‘but, I think that, in the film, you go on an emotional journey in the sense that you feel the deaths and the casualties. I think putting in more graphic images than that would have been a pyrrhic victory in the sense of “I don’t self-censor.” It would have turned off a lot of people who just aren’t used to seeing that level of violence.’

When the time came to create a film from over what Hetherington estimates to be around ‘150 hours’ of raw footage, the directors ran into a sizeable problem. In focussing solely on the experience of the soldiers while refusing to utilise narration or turn Restrepo into a reporter-led piece – ‘Anything that would break the illusion that the viewer is in the valley, we didn’t put in the film – that was the leading structural rule we set.’ – Hetherington and Junger found that the piece was rather formless. ‘We came to think about how to sew it all together, and we decided that we would go to Italy, where the men are based, to make these post-deployment interviews,’ says Hetherington.

But, when they arrived, they found that Second Platoon were a vastly different group from the excitable, bravado-laden soldiers they had known in the Korangal. ‘What we hadn’t factored in was that, three months after the deployment is the amount of time it takes for PTSD (Post-Traumatic Stress Disorder) to come on,’ says Hetherington. Gifting the piece some of its most emotional moments – the stark honesty the young troops display is startling – Restrepo’s interview segments firmly debunk the notion that Generation Xbox are largely unaffected by war. The key to the power of these segments, Hetherington suggests, are the unique relationships forged in the Korangal. 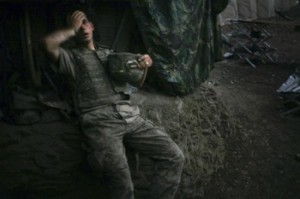 ‘We didn’t turn up as military authority figures, we weren’t the company shrink, and we weren’t their loved ones,’ he reasons. ‘We weren’t people they might be afraid of opening up to; we were friends who could identify with specific moments from the Korangal. Those conversations in Italy became some of the most powerful material in the film because of that dynamic.’

As a portrait of the effects of combat on fragile young minds, it is these segments that, with the need to reintegrate coalition forces becoming a pressing issue, are particularly prescient. The notion, unsurprisingly, isn’t lost on Hetherington. ‘These young guys are being sent out on the taxpayers’ dollar,’ he says, ‘and, regardless of your politics, you have a responsibility to understand their experience, which, in a way, is also understanding how to reintegrate them back home.’

Working within the structures of the US army’s embed scheme, Hetherington was surprised at the level of freedom both he and Junger were allowed. ‘The military never asked me to show them material,’ he says, ‘and they never censored me.’ Indeed, in many ways, Hetherington saw little difference between the embedment and normal reporting. ‘On a larger, philosophical level, all journalism is embedded,’ he says. ‘All journalism requires navigation with the subject where you avoid offending them to get what you want. Embedding with the military is no different.’

Although Hetherington is defensive of R 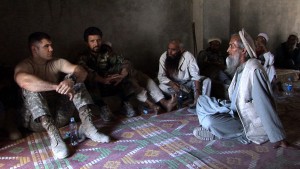 estrepo as an apolitical work, he does accept that the film’s crux – of one company of young men left to defend arguably the most dangerous area in Afghanistan and failing to gain the support of the natives– can be taken to be symbolic of the wider Afghan war. ‘There was an absolute cultural disconnection between the two groups,’ he says. ‘But, at the same time, winning hearts and minds isn’t bout bear hugs and high fives; it’s about giving the population you’re amongst a reasonable expectation of security.’

‘The US and NATO intervened in Afghanistan in 2001,’ Hetherington states. ‘Eventually their focus turned to Iraq and they left 19,000 soldiers in the country. I mean, there are 40,000 cops just in New York City… It sends a message that we are not serious about their security,’ he sighs. ‘That’s the kind of stuff we saw in the Korangal, and that is symptomatic of something wider. What you see in Restrepo is what counter-insurgency on the cheap looks like.’