Film Review: Harry Potter and the Deathly Hallows Part I 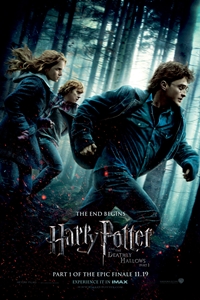 Warning: I have revealed when the film is split at the end of Part I and mentioned some key scenes, one that is not in the book.

Hermione Granger (Emma Watson) stands behind her parents in the home she grew up in, wand poised, and whispers “Obliviate”. As she looks around, the memory charm removes her from every photo with her parents, as she emotionally and physically leaves their lives for good. Meanwhile, Ron Weasley (Rupert Grint) watches the sky with concern as his mother calls him in for dinner, and the boy who lived, Harry Potter (Daniel Radcliffe) watches the Dursley family he has lived with since he began attending Hogwarts School of Witchcraft and Wizardry leave their home in search of safety.

The sheer terror of what these three best friends must achieve now overcomes the audience in the sentimental scenes that flood this first half of the long awaited final film adaptation of J K Rowling’s popular novels. David Yates has finally appreciated the finer details within the book that were not so obvious in the previous film, Harry Potter and the Half Blood Prince (2009), which seemed to focus on the sexual tension between the main characters as it had not particularly been addressed in the five films beforehand. As the most feared and powerful wizard Lord Voldemort (Ralph Fiennes) grows stronger (yet fails to make much of an appearance in this part of the film) Hermione, Harry and Ron must leave their loved ones in search of the seven Horcruxes that contain Voldemort’s soul. Two have already been destroyed; one in Harry Potter and the Chamber of Secrets (2002), the other in the Half Blood Prince, and this film focuses on one Horcrux, a locket, which results in angry behaviour from whoever wears it for too long. Rupert Grint’s performance is emphasised here, as he wears the locket the most and becomes insanely jealous of Hermione and Harry, as his make-up shows dark circles under his eyes with pale skin he almost appears evil, and we begin to see the divide in their companionship.

The original source material is obvious throughout the film through detailed conversations and explanations, despite scenes where the trio are at a loss of what to do next, it is apparent that since Harry Potter and the Philosopher’s Stone (2001) the three main actors have come far in terms of ability to give a genuinely sentimental and distraught performance. Yates has incorporated a much darker side of the narrative; for every emotional scene a tense build up followed, with a couple of jumpy moments that probably even startled the parents in the audience. A few scenes are quite graphic in terms of violence and nudity; particularly the scene as the locket is opened, and a dark, mysterious ghost-like figure talks down to Ron about him being nothing compared to Harry. Two naked figures proceed to appear; Harry and Hermione, who passionately kiss and are lost in each other’s arms. This scene was a good adaptation from the book, but nevertheless still a bit embarrassing for the audiences who have grown up with the actors, and it appears that Yates has taken some risks with this film that he had not considered before. The soundtrack is striking and sent a shiver up my spine, as with every close up of a solitary character, and even the argument between Harry and Ron, the pianos and violins heighten the atmosphere with pauses of silence before delivering a breath-taking climax which truly does convey that this is the end of such an epic adventure.

Helena Bonham Carter gave a familiar chilling performance as Bellatrix Lestrange, and showed her true colours as an actress in the scene where she tortures Hermione, with her usual wild hair and wide eyes conveying her yearning for revenge and the death of Harry Potter. The film does not involve the other lead characters as much as you would like, but this is of course down to the book, and if you have read it then you will be enthusiastically waiting on edge for Part II in July next year. The introduction of Bill Weasley (Domhnall Gleeson) and Mundungus Fletcher (Andy Linden) has definitely been delayed and some audiences may agree that it is a shame they had not been introduced earlier in the films they should have appeared in, as it feels a little rushed to fit everything in. Despite this, the cast deliver as they should and give their all, and with such a long running time the audience really do become intimate with them.  The forest locations are fantastic; the film is mainly shot in winter, reflecting the cold and sombre moods the three friends must fight through to gain strength. The first part is not all gloom, Ron has several comical moments amongst his violent outbursts, and a few crude moments allow some amusements, (“Blackthorn, ten inch, nothing special but I thought you might like it if it’s going unused”), which are thankfully not as forced as much as they were in the Half Blood Prince.

The most intriguing element of the film is its divide. There is no doubt that a lot of money will be made at the box office from splitting the film, along with all the merchandise and deals available at the cinema, however, considering that in total the film will be longer than James Cameron’s Avatar (2009), the attention to detail from scriptwriter Steve Kloves will surely be appreciated by the audience, as he has concentrated on the most important elements of J K Rowling’s exciting novel. Kloves takes the plot one step at a time; engaging the audience with the minor stories in the book, such as the story of The Tales of Beedle the Bard (written by J K Rowling also), which introduces the concept of the Deathly Hallows into the film through an abstract animation with silhouetted figures whom represent Death and the three Peverell Brothers. These three brothers each acquire an element of the Deathly Hallows, which Harry Potter must now find in the wizard world. This beautiful story broke up the chaos and was a reminder that the film is mainly targeted at a younger generation, and because there was a lot of information to take in, this carefully constructed animation gave an easier understanding for everyone, especially those who may not be familiar with the original text.

The ending scenes of Part I were appropriately chosen; they were touching, and we said goodbye to one of the most admired characters from Harry Potter and the Chamber of Secrets (2002). The voice of Dobby, done by Toby Jones, softly speaks “Such a beautiful place to be with friends” as he lies in Harry’s arms preparing to die. This is done so realistically through CGI, his eyes capturing the sadness as Alexandre Desplat really does tug at our hearts with his musical genius, giving us an harmonious farewell as Harry buries Dobby with his own hands. The visual effects of Part I are aesthetically pleasing, however a little manic, and in some action scenes the shots are lost in each other which is disappointing. Hopefully this won’t be the case in Part II, which audiences can expect to be fast paced and even more emotionally challenging.