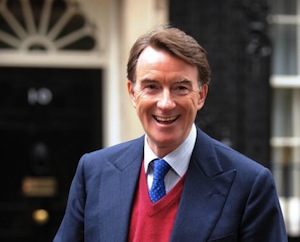 It’s a testament to the transient nature of politics and its biggest actors that the New Labour era, barely six months dead at time of writing, already feels like a lifetime ago. Hannah Rothchild’s dying days portrait, billed as an intimate document of the “Prince of Darkness”, is less The Thick of It and more a daisy chain of moments; a pensive face here, a smudge of yoghurt on the tie there; in fact the “yogurt on tie moment” may become an established euphemism for public figures caught off guard.

Culled from a reported 300 hours of footage, this 75 minute documentary may seem like a poor return on what might have been a naked bounding through one of the most important political periods of recent years, but Rothchild isn’t a political filmmaker and her editorial priorities reveal different preoccupations. She’s interested in that mixture of gentility and menace, ironically a description not of Peter Mandelson but of his Grandfather, the Labour Deputy Prime Minister Herbert Morrison, which so neatly encapsulates the grandson’s malevolent persona.

With a camera permanently aimed at Mandy from the Antarctic month of January to the less than glad confident morning after the election, Rothchild documents a quiet but suspicious ghoul, engaged in rehabilitating Gordon Brown’s image and later, trying to save the campaign dubbed “futile, fucked and finished” by his cabal of strategists; accurate to an F as it turned out.

The omissions are arguably more interesting than the inclusions, for example a rant against the Murdoch media empire remains on the cutting room floor, but there’s nevertheless a real sense of history to proceedings, both personal and political. In one of the more poignant moments, Mandelson, forced to contemplate the end of his political career, laments the poorly punctuated writing on the wall, throwing up the question of what dyed in the wool political animals do when the electorate finally makes them redundant. Politics is Mandy’s life and there’s no plan b.

God help you, you may even feel some empathy with “PM” as he’s mischievously referred to throughout; arguably a political colossus despite any tangible achievements beyond the emasculation of the “bloody Labour Party” as a progressive force and educating the populous in the dark arts of media manipulation. Despite this he can boast of a meteoric rise within the British political class, perhaps, we’re left to speculate, because of the very different definitions of achievement that exist in the Westminster village and the enlightened world beyond.

It’s moments like these in which Mandelson looks distinctly vulnerable. Brooding in his Westminster fiefdom with his “retinue of advisers”, as William Hague wittily puts it, he’s beholden to events and cuts a mildly tragic figure as a consequence. Scene after scene paints the good Lord as a confident and insidious political tactician, feeding the media their lines and acting as a crutch for his master’s fragile ego. The problem is that the game has become a means to an end, divorced from its noble intent. Is it any wonder that we’re so cynical about politicians when they’re unashamedly this cynical about each other…and us?

Although Rothchild’s film asks no big political questions and therefore gets few answers, she has managed, somewhat improbably, to deliver a few clear moments of insight amongst the morass of incident. There’s a neat bit of doublethink in Mandy’s contention that the problem with the Tories is their sense of entitlement while simultaneously accepting that it was “Gordon’s turn” to lead the Labour Party; a truism that underpinned 13 years of underachievement and infighting. Deep seeded self-importance is manifest in a studied seriousness and the casual handing over of an empty yogurt pot to a put upon aide. One might also consider it significant that in a good-natured exchange with his then shadow Ken “I’m freezing the duty on spirits” Clarke, he’s got no reply to the putdown “at least I’ve got a past I can trade on.” Beneath the sheen of steely confidence, with the project in its death throes, there’s a sense of anticlimax, vividly captured for posterity.

The two questions the documentary does manage to ask, namely was Mandelson the real power behind the throne and are we in effect, seeing the genuine individual, are answered with a resounding yes and a mumbled maybe. There’s little doubt that Brown, of whom Mandy laments his inability to centre his tie, let alone communicate with the electorate, needed the former Business Secretary’s mirage of strength and permanent hardon for media confrontation at a time when the ship was listing badly. Less clear is the inner life of the man himself. Mandelson is the personification of ambiguity; evasive, guarded and prone to out and out fabrication, even when the facts are known to his inquisitors.

His characterisation of bitterness and dick waving at the heart of Labour as “creative tension” is a typical piece of Mandelsonian spin. We don’t believe it, he knows we don’t believe it but it hardly matters; that’s the official narrative and it gives its creator a kick to deliver it. The same tension, between truth and spin dogs Rothchild’s attempts to tell her own story. You sense that Mandelson was never going to allow someone else to paint the portrait, anymore than the photographer that shot him for Tatler got to choose which picture would be used for the magazine. You can’t kid a kidder, no matter how much time you spend in their company; a political journalist would have known that.