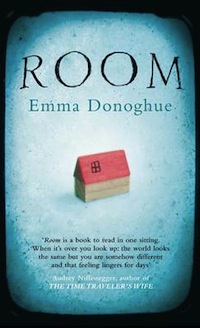 Today I’m five and a quarter. I’ve just finished narrating my first book which Ma says is a pretty amazing thing for a small boy to have done. Book is something I made. I grew up in Room with Ma until a few weeks ago. She gave me Dylan the Digger to read when I was growing up and other objects that I name like people because they are my friends in Room. They are my only friends along with Rug and Shelf and Skylight and Remote because Old Nick stole Ma when she was nineteen and then she had my sister in Room but she died and then I came along but that doesn’t matter now, do you want to know about Book?

I’m sitting in a room, not Room but a room, why do they call other places room? I get confused like this a lot in the novel. Opposite me is a man called Ed. Ed looks funny. He’s got silly glasses that come from France and a weird face. He makes me think of Old Nick. He’s here to talk about Room. ‘I’m going to review your book,’ he says, ‘is that okay Jack?’ I nod but I don’t know what a review means.

Ed tells me that Dylan the Digger and Alice when she went down the rabbit hole and my other books are something called “a device” which he says “foreshadow a descriptive vocabulary” that allows me to “narrate the story in a plausible way” despite my age. Then Ed says something funny, though not funny like the jokes that Ma makes.

‘Jack, listen to me,’ says Ed. His voice has gone all strange.

‘You don’t talk like a real five year old. In fact you’re conspicuously a forty something year old woman attempting to construct the subjectivity of a small child as she imagines it to sound, having clearly forgotten how she thought at that age.’

I don’t like being called “it”, I am a he and my breasts are starting to hurt for some reason.