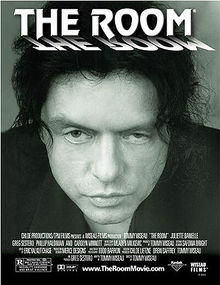 Once upon a time I liked to imagine I knew something about film. I flattered myself I was an expert in some areas. But reader, I knew nothing. And you knew even less.

Why this loss of confidence? Answer: The Room. Watching it is like crossing over to a counterfactual universe where the rules of film grammar and screenwriting have been written by Dan Brown. As a critic it’s impossible to know where to begin. We arts folk are simple people with no vocation or skill of our own, so must earn our sheckles pontificating on those that do. We consider our principle mission to differentiate good work from bad but Tommy Wiseau, the creator of this photochemical monster, invented a technique that acts as blue touch paper to bad notices. He overpowers the reviewer’s critical faculty with magnificent ineptitude. The challenge Wiseau issues is simple; “describe theeaat!”  It’s a brave hack that picks up the gauntlet.

The movie’s a challenge to both one’s humanity and one’s craft. As the credits roll on this thing of morbid beauty, a movie that puts storytelling craft back 2,000 years, attempting a second hand account seems almost absurd.

Wiseau, who probably developed each reel of film in addition to writing, directing and producing the piece, is its star and a leading man like none before him. If you’ll indulge the celestial metaphor, and frankly even if you won’t, he’s more than a star, he’s our sun ten billion years from now, in its death throes and all consuming. His co-stars are mere satellites, in orbit around him, reliant on his guiding light for sustenance but slowly, and heartbreakingly from the audience’s point of view, he expands across the frame and destroys them. Every scene in the film is like watching the death of a civilisation. You imagine the incalculable loss of knowledge, of imagination, of culture. It’s unbearable and the tears stream down your cheeks.

What’s it about you may ask? What a pertinent but self-defeating question. There’s no answer I could give you worth a sovereign. Ostensibly one might call it a melodrama, but then it neither sings nor effectively dramatises. There’s less a plot, more an ethereal impression of one. Wiseau tried to make sense of his flashes of twisted genius but English is such a crude instrument. There weren’t the words. Frustrated he tried to lay some of them down regardless. Some were laid down. Many of the best lines died in the attempt. This isn’t a story you could write. No man could have got close. All he knew was that women were perfidious, innately evil creatures, though the breasts of an 18 year old were nice. The public had to know.

Then there’s Wiseau himself. The helmsman of this impossibly shapeless confluence of bad sex, misogyny and senseless ball play is like a random ejaculation from a vintage Roger Corman movie; the body you’ve seen a thousand times with a cloth covering its face in every grisly on-screen autopsy from Cracker to From Hell. Face exposed, he looks like Megan Fox if she’d taken a sip from the wrong grail at the climax of Indiana Jones and the Last Crusade. What kind of sound emanates from such a face? Apparently a voice recording of Arnold Schwarzenegger with the battery running down. Imagine such a voice delivering lines like “I did not hit her, it’s not true! It’s bullshit! I did not hit her! I did naaaht. Oh hi Mark!” Imagine.

What of the other dialogue? Get a book out by script guru Syd Field and he’ll tell you screenwriting is about concision, economy and subtext. But Field was a false prophet in a pre-Wiseau era. Every auteur breaks the rules but Tommy Wiseau took Field’s writers bible and publicly urinated on to each page, inviting open-mouthed scribes to pick it up afterwards. Who’d dare? Exchanges flirt with your expectations and then undercut them, making you feel ridiculous. You’re silly putty in the Director’s horribly veined hands.

When Johnny’s fiancé Lisa (Juliette Danielle) is lamenting her mother’s interference over an affair with Johnny’s best friend Mark, a man who looks exactly like Ewan McGregor’s Attack of the Clones action figure, she asserts that “she’s a stupid bitch. She wants to control my life. I’m not going to put up with that. I’m going to do what I want to do, and that’s it. What do you think I should do?”

Said mother has breast cancer but assures her daughter that “it’s okay, I’ll probably get better” and then never mentions it again. You can imagine old hands like Douglas Sirk applauding from the grave. Mark (played by line producer Greg Sestero) may look as though he’s escaped from a Mattel warehouse but his character is invested with a gift for rhetoric that would have humbled Peter Ustinov. “Keep your stupid comments in your pocket!” he tells one character and in one of many memorable roof top encounters, tells Johnny/Tommy that “I used to know a girl, she had a dozen guys. One of them found out about it… beat her up so bad she ended up at a hospital on Guerrero Street” only for Johnny to reply, “Ha ha ha. What a story, Mark!”  Would-be raconteurs take note.

The philistines amongst you will already be bleating like a bunch of gannets about how ill-conceived some of this sounds but a true cinema of engagement is one that directly challenges the preconceived ideas of its audience. It puts one muddy boot on to their comfort carpet and says ‘what you are going to do about it?’ The Room is such a film. The introduction and constant reintroduction of Denny (Philip Haldiman), the man-child acolyte of Johnny, is the case in point. Denny, who occupies that indeterminate age territory once the sole domain of Gary Coleman from Diff’rent Strokes, is innocent but also sexually curious and it isn’t clear that Johnny knows where the boundaries lie as he walks the difficult tightrope between role model and friend. Denny is gently herded away from the pre-marital bed, but only once he’s engaged in proto-sexual horseplay with both Johnny and his nubile bride to be. Johnny took him under his stringy wing, Lisa explains and he’s free to come and go as he pleases. He’s a lucky boy; a lucky boy that fellates Johnny’s corpse, if the director’s blocking in the movie’s dying moments is any indication.

I wouldn’t commit so unequivocally when invoking lesser titles but I make you this promise: though you’ll see better films in your life – more coherent, better performed, more imaginative and less oriented around the relationship failings of its director and leading man, you will never sit through a more jaw dropping movie than The Room. It’s 99 minutes that will change your life. That’s 3 minutes shorter than 9/11 but not one jot less game changing for all that. Don’t believe me? Well as one character memorably put it, “you can just fall off the face of the Earth. And that’s a promise!”

The Room is screened at various independent cinemas throughout the year. Check your local listings for details.