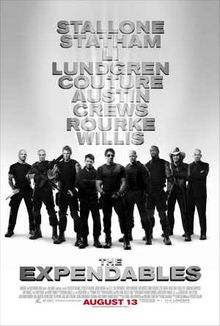 The Fall Of Man

Each of us knows instinctively when a shift has occurred in popular culture. Pinpointing when that shift began isn’t so easy. What, for example, was the inciting incident that precipitated the emasculation of the action movie? When did we fall out of love with men that were grown in labs, employing a cocktail of growth hormones and anabolic steroids, and start worrying about strong female characters and the familial component coming to the fore? I don’t know about you, because I’ve never met you, but I can’t think of a single mainstream box office hit from the last twenty years that wouldn’t have been significantly improved by the inclusion of a muscular action hero and the excision of a relationship.

If Titanic had been made ten years earlier, wouldn’t we have expected Arnold Schwarzenegger to be treading the planks of the famous ship, instead of the androgynous DiCaprio? What a better film it might have been if Billy Zane had been dispatched with a single punch that sent his limp body careering into the sinking husk of the bow section, accompanied by a deadpan “you’re going under!”

It’s hard to say when the era of the Nietzschian Ubermensch passed into obscurity. Perhaps audiences tired of the self-parodic absurdity of these one-man killing machine movies, in which scores of disposable humans were brutalised to sate our adolescent blood lust. More likely, however, is the notion that Hollywood woke up to the existence of another demographic; a curious, mutated strain of the ticket buying public characterised by genital deformity, that is to say the total absence of any phallic appendage. They had soft, often hairless skin, low muscle mass and a mental disorder that caused a chemical predisposition toward more recognisably human characters who dallied in emotions and relationships, rather than the genocidal tendency. The heads of the major studios wanted to call these curious creatures “Morlocks”, but “women” was the name eventually adopted.