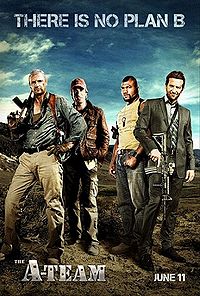 American Television in the 1980s was a high concept playground in which the infantile and the excessive found willing playmates in millions of households. British commentators used to say that the likes of The A-Team, in which a band of fugitive “crack commandos” righted wrongs in bloodless standoffs with rednecks, corrupt businessmen and criminal gangs, was vulgar toss aimed at excitable young boys, and so it was, but it was also glorious escapism; the kind of pre-fabricated, boom time bust up that added spice to bleak Saturday afternoons.

27 years after Hannibal Smith and company debuted, the position has been somewhat reversed. Now, it’s US television which specialises in brooding, complicated, multi-arced narratives, of the kind Britain imagined it once made but seldom did, while UK TV vomits up high concept fast food – Primeval, Robin Hood, Torchwood, which in terms of scope and tone, are already museum pieces to US audiences with HBO subscriptions.

Yesteryear’s playground is today’s necropolis you see, but this, though not bad shorthand for the way TV commissioning has evolved over the last 30 years, fails in describing the other great flip that’s occurred over the same period. While TV has grown up, at least on US screens, the film industry has become considerably more infantile. Many US actors – Glenn Close, Kiefer Sutherland, Martin Sheen – have all done their best work on the box these past ten years, as American Television has pushed itself, while conversely, the adult and socially aware cinema of the 1970s has lapsed into a terminal state of retardation.

In such a climate, the teen friendly TV shows of the Eighties are perfect raw material for the cannibalistic, nostalgia driven, low-risk film culture of the present, and so yet another relic from TV’s creative adolescence is revived as throwaway entertainment for an indifferent but pop-culture literate audience. We may be just one decade away from the BBFC issuing certificates to McDonalds meals but relax, there’s still Manimal, MacGyver and T.J Hooker to look forward to in the interim.

Now The A-Team 2010 is here, anachronistically without bookending from 3,2,1 and Lesley Crowther’s The Price is Right; and if it fails as a revival, that’s not due to the omission of onscreen overkill, “underrated” as Bradley Cooper’s Templeton Peck rightly points out, nor the misogyny, which might have been imported directly from the ’80s, but from confused execution and a sense that director Joe Carnahan is fighting against modern instincts rather than letting go and allowing a full childhood regression to take place.