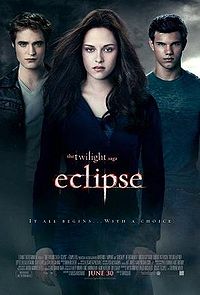 Love will tear us apart (again)

Stephanie Meyer thought it unnecessary to add the prefix “Twilight saga” to her third vampwolf (wolfpire?) novel, but when it comes to movie branding, and the fickle attentions of the teen market, why risk fans missing out on the entirety of part three due to a misunderstanding? After all, did you ever catch the Titanic sequel? Even 20th Century Fox can’t find it because no one can remember what it was called.

With the words “twilight saga” attached however, promises are made – expectations set. The dictionary defines a saga thusly: “any narrative of legend or heroic exploits” or “a form of a novel [of adaptation thereof] in which the members or generations of a family or social group are chronicled in long and leisurely narrative.” In respect of the first definition, legendary or heroic exploits, the third film, like its older siblings, has a claim, after all there are heroes in the Twilight story, it’s just a struggle to see who they are.

Legendary, however, may be wishful thinking. Meyer’s teen bore-triangle, has a mimetic quality, assuming the same degree of naval gazing self-interest as the target demographic. Perhaps you’re a parent who had an empty adolescence in which you came to believe that it was the responsibility of other people to keep you amused, you lazy minded bastards, so you filled the black hole in your downtime with alcohol and promiscuous intercourse. Consequently you now have teenage children, though you’re only in your thirties. You’ve already noted how self-absorbed they are and the disproportionate importance they place on their own private melodramas – a relationship that won’t quite work here, a cosmetic issue there. Worse, they’re oblivious to the sacrifices you imposed upon yourself – the life you lost, because their embryonic emotions are the only force in the universe. Everything else is white noise.

Listening to them prattle on – boorishly exchanging gossip about Mel’s feelings for Joe and Joe’s relationship with Jubliance, you struggle to understand how these misfits will cope when they’re faced with real problems. Nevertheless, it’s a given that they’ll identity with Bella – that loll eyed mouse – who’s as listless and awkward as your loin fruit. Your kids won’t discuss their own deficiencies but Bella’s are laid bare – she’s a death obsessed void ship; the kind of girl who causes lights to dim a little when she walks into the room. She’s sour faced and looking forward to a life of blood lust and absenting herself from the entire human race.  This is the girl your daughters relate to. You’ve got bigger problems than household debt.

Your only comfort is the knowledge that your babies will, in all likelihood, leave behind this haunted adolescence and embrace life. Bella, however, is a different species – the Homo Fictus; she’s trapped inside this plodding, witless narrative and she always will be. Whatever the vampires and wolves tell her, and they discuss her impending transformation frequently because it’s the only show in this dead end town, she’s already cursed.

On one hand there’s Edward – a name her boyfriend doesn’t deserve on account of his maladriot, barely communicative persona. She may love him, because you sense the two of them could talk about each other until the heat death of the cosmos, but what would be in it for a normal girl, of the kind the movie hopes to deflower, who craves romance with a warm, energetic man extolling a real zest for life? Edward flouts the evolutionary convention that a partner must look healthy in order to attract a mate. His pallid skin and sometimes black pupils make him a moistening prospect for necrophiles and medical students but no one else. He says very little which is just as well because he’s humourless and creepy. If this is what women want, you think, then it stands everything you’ve felt in your tissues on its head.

Then there’s Jacob – the wolfman, less a person and more an anthropomorphised steak.  Jacob can attempt a joke, sometimes succeeding. He’s even the colour of flesh, which must be a plus in any girl’s book, but Bella can’t love him as hard. Why? Because he’s too well adjusted and too interested in living, and worse, procreating. His fetishising of a healthy lifestyle, which bar his manimal issues, might condemn Bella to a reasonable dollop of happiness, seems absurd when she eyes the anaemic alternative.

So there’s this appalling choice to be made, but made slowly, because there’s two more movies to get through. This brings us back to the second part of a saga’s definition – “chronicled in a long and leisurely narrative.” In book form this may be one long tome or, to take the Meyer route, several medium sized novels. There’s no doubt that the series is long and leisurely but when Doctor Johnson was writing his dictionary, he surely would have had a long narrative punctuated by incident in mind, rather than a series of leisurely narratives within one long narrative, which like this sentence just seems to go on and on and on without ever actually getting to the meat you were promised in the beginning – a beginning that seems a very long way away now.

There’s certainly more going on in Eclipse than New Moon but any less and you might have thought you were watching an arthouse experiment in action free cinema. Bella’s cock teasing is at the forefront; bringing up the rear – redhead Victoria and her assortment of freshly minted “newborns” – a ravenous army of vamps whom she’s using to avenge the death of her own boyfriend earlier in the series. The latter is a hook upon which to hang more angst, more soul searching, more penis pied pipering, while Bella’s planned vampirism, maybe a metaphor for that aforementioned teen impregnation and the end of her life, the mother of all elopements, hangs in the air, and you will her on, though faster than director David Slade dares.

The movie ends without the satisfaction of a resolution, only the tease of one, which is a profit maximising move straight from the J.K. Rowling playbook. The film’s confusing; why, when Edward and Jacob have a simmering homosexual lust for one another, exchanging hungry looks in scene after scene, do they not simply act on it? Why are they using this girl as a cultural bridge? Wouldn’t it be better to be brave, visit each other’s clans and break the news to the elders? You can’t fathom the reluctance, given the liberal pedigree built into both camps, but that Bella is the still centre of a hormonally super-charged universe is obvious. If only she’d realise it and excuse herself so we could all go home a little sooner.