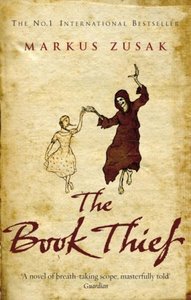 There are a lot of us out there, still, who are indoctrinated by stories of the war. World War II, I mean…and perhaps indoctrinated is the wrong word. Influenced, perhaps, is better. I grew up listening to my Grandpa’s stories of his experiences in the war, and when I think of it now it seems a simultaneously unimaginable time, so different to now, and not-really-that-long-ago. My Grandpa has passed away now, along with so many others who experienced the war, and we sit and watch as a major world event slips out of living memory before our very eyes. To our children it will be ancient history, but we’re still currently at a stage where the subject is highly emotive on a personal level to a lot of people.

This brings me to The Book Thief, a novel that utilises the family memories of wartime Germany of Marcus Zusak’s family, now based in Sydney. I will say now, I have some fundamental problems with this novel, but I don’t want to lose sight of its core, its soul if you like, amongst my petty gripes and whingeing. You can look forward to those later. I’ll start with a little background…

The Gravedigger’s Handbook is the first book stolen by nine year old Liesel, the book thief. Though in reality she finds it on the floor at her brother’s funeral, so really it’s more of a finder’s, keeper’s situation. However, this is her story, so she can call it what she likes. It is, I feel, both a coming of age story and a tale of survival. Liesel is surviving Nazi Germany, while building relationships with her new foster parents, the mayor’s wife, who she steals books from, and Rudy, the boy next door. And oh yes, there’s a Jew hidden in the basement and the story is narrated by Death. There is quite a lot going on in the novel, especially in terms of how many important, life-changing relationships Liesel forms, and how many of these can be killed off at the end in the hectic final scenes.

I want to step away from the characters a moment, before I start complaining. The one main thing that I really liked about this novel is just the day to day depiction of life in Nazi Germany. Watching prisoners being marched to a concentration camp was part of everyday life if you lived up the road from Dachau. As were book burnings, Hitler Youth, rationing and cowering in cellars from Allied bombs. It was refreshing, and interesting, to read an account of World War II from the point of view of ordinary German people, they are under-represented in literature. This novel, however, could have served them so much better.

Liesel loves books, and a fascination with words is a key theme. She is sustained through times of great physical hunger and fear by feeding instead her hunger for knowledge. This brings me to the reason why I wanted to read this novel. For anyone who loves books as much as I do, the Nazi book burnings hold a peculiar fascination in the imagination. I really wish that Zusak had tried to tap in to that feeling more. The episode of the book burning was just one more in a long line of things that happen to Liesel, rather than the central event in her conscious that I would have expected it to be.

I realise that despite my intentions, this is turning into a negative review. I hate doing this, but despite wanting to love every book I read, I’m afraid I cannot love The Book Thief. To be honest, it kind of makes me wonder if I’m weird, as I’ve read so many good reviews. However, each to their own, right?

My main, underlying issue was I did not like the style, or the way it was written. However, I’m going to put that to one side, because that is very much a matter for personal taste. I border upon being some kind of obsessive, compulsive language freak, and if I take a dislike to how something is written, or I don’t feel it flows properly, then I cannot like it. Zusak shows flashes of fluency, but I felt the overall effect was clunky and a lot of the description was overly contrived. Then there was the narrator…Death. Seriously, if Death is actually like this, then I really, really don’t want to die even more than I already didn’t want to before I read this book.

Death, I really hate you. For a start, you are actually really boring. How can something that has existed for all time have so little insight to offer? Death, you are basically reading Liesel’s story to us, so why not give it to us in her own words?

Using death as a minor character in the novel, or as a framing device, would have worked better, I felt, than using him (it?) as the narrator. Death is not actually present for large chunks of the story; he is reading it from the journal Liesel wrote of her experiences. The novel would be much more powerful if that journal had been left to stand alone. I could not connect with Liesel, or any of the characters really, because Death was stood in the way. Crucially, I didn’t really end up caring about the characters, nor did I feel any emotion for their fate. (I really should say here…I am not a heartless bitch. I actually cry at most things, so this is a big fail.) In particular, the mayor’s wife is quite a significant presence, but she appears as no more than a wooden, two-dimensional caricature of a broken, grieving woman.

I am left with the distinct impression that Zusak tried to do too much. There are enough ideas for three novels here. The idea of the girl stealing books from a Nazi book burning is a good one, and I think that simple premise is enough. I felt that Zusak attempted to explain too much, and sometimes it is ok to leave your readers to work a few things out for themselves. The story of a girl who loves books being forced to watch them burn could have been a beautiful story, Mr Zusak, but you used too much padding. Too much sentimental padding by far.

To end on a positive note, which is always nice….I’ve read some speculation on the internet that a film of this book is currently ‘in development’. So I’m going to keep my fingers crossed for that I enjoy it better than the book.