“I’ve been pondering if…”

There is currently talk everywhere of those ‘misguided youths’ who disorient and frighten their elder generations in their constant, often aggressive forging of their generation’s own, new identity – moving away from previous traditions and the ‘recognised’ social norms.

But this isn’t a new phenomenon.

In fact I believe the best example of a youthful challenge to society and all its established order can be found in Lindsay Anderson’s if…, released in 1968.

It says it all that the script was originally written under the title of ‘Crusaders’; the film follows three embittered boys rebelling against the stuffy, out-dated dogma of their English Public-School forefathers, and moving, not so much to create a new identity for their generation, but to annihilate the identity of the ones that have gone before it.

There was no better time to release a film about shifts in the architecture of society; the mellow tones of the swinging sixties was giving way to a decade that would bring violence and confrontation, in media such as the anarchy of punk and in reality through the oncoming terrorism of the IRA, rises in unemployment and strikes throughout England.

In France the film premiered a mere twelve months after the infamous student riots in Paris.

Change was imminent and you could feel it in the air.

The two decades meeting one another rather resembled two tectonic plates slowly moving together; the mutinous youths of the time, beautifully encapsulated in Malcolm McDowell’s screen debut as schoolboy (Mick) Travis, were simply waiting for the resulting collision.

There are several things that make this film such an absorbing and astonishing spectacle.

Firstly McDowell’s performance is resoundingly powerful, his later infamous character of Alexander DeLarge in A Clockwork Orange (1971) being based on the smiling, almost theatrical air with which he deals with the violence in the scene where he is beaten – a scene I would argue as one of the most powerful and cleverly-directed in cinema; the audience privy not to the punishment itself but to the other boys expressions as repeatedly the sound of quickening steps of leather shoes on a gym floor are punctuated with the sound of wood against flesh.

At a mere 26 years old he plays the ‘deluded’ neo-soldier perfectly. He is the epitome of the revolutionary – drawing unwavering followers in fellow school-mates Johnny and Wallace, sworn in to the status of blood-brotherhood as he sermonises and prophecises on both the profundity and the banality of their ‘institutionalised’ lives;

“There’s no such thing as a wrong war. Violence and revolution are the only pure acts.”

Watched today, the film undeniably resonates with the troubling current times of discontent extremist young men, being recruited under the proposition of that simple ideal of detonating and rupturing the established order.

Travis is a 17 year-old soldier in school uniform – resolute in his convictions that authority merely represents oppression – and he revels in every opportunity he gets to confront and challenge his elders.

And who can blame him? Those who represent authority – The Headmaster ,The Prefects, General Denson, and particularly the Senior Master played by Arthur Lowe of Dad’s Army fame are either calamitous, corrupt or most often both.

It is deliciously ironic that Lowe – made famous by the Home Guard sitcom – rests within the public consciousness through this role as a well-meaning, but ultimately bumbling and hapless leader, with his own loyal fools under his orders. It is fascinating that Lowe made his debut as ‘Capt. Mainwaring’ a mere 5 months before if… was released – his role as the Captain lasting for another nine years – but his performance in this film criminally neglected. However new viewer’s of the film with his most famous role in mind will always have the pre-knowledge of him as an ineffectual old man – a perfect description of Anderson’s intended portrayal of the Senior Master, and a fortuitous secondary texture to the role that the Director could never have predicted (but most certainly would have loved.)

Within minutes of the film starting a clear binary opposition is set up; the School Authorities vs Travis and his two friends – The cobweb-ridden dusty dogma of traditional English education vs the new hybrid of philosophies, pieced together by Travis’ pictures torn from magazines; predators, soldiers and bullet-holed scraps of the Royal Family adorning his dorm room.

It is a beautiful portrayal of the unstoppable force of the determination of youth against the immovable object of tradition and authority, rooted into the very fibre of the country and its war-winning heroes just two decades previously.

Sexuality is almost secretly scattered everywhere throughout the film as one of the taboo ‘if…’ topics – it is so rife amongst the students and the staff that one almost expects Michael Palin to walk on screen in a t-shirt reading ‘SEX’ and shouting ‘Help! – I’m being repressed!” Of course, Anderson uses the most delicate of suggestive techniques; one of the younger students caressing a peach that he has brought from home, another watching transfixed, the camera slowing as ‘Wally’ Wallace takes to the gymnasium horizontal bar, and the ‘meek’ Mrs Kemp suddenly appearing naked on-screen, wandering the boy’s dorms as they are out at lessons.

Yet instead of a drama, that would seem the most likely genre to focus on this conflict of this film, Anderson chose to make a fantasy: Travis’ fantasy – and in this way there is no definitive way of telling what in the film is ‘real’ and actually happening, and what is part of Travis’ daydreams, his visions of how he feels this world should be.

Anderson fashioned this with several techniques:

Black-and-white scenes are interspersed with colour. This has caused endless discrepancy over the artistic intention behind differently-coloured scenes being seemingly sewn together with no clear pattern or correlation to the story-line. The reality is the shots in the Chapel had to be in black-and-white for technical reasons and later Anderson decided he would shoot further scenes this way so that the interlacing of monochrome and colour would further disorientate the viewer.

Those in authority positions are often played as ‘caricatures’ – overblown performances further alienating themselves from Travis, but also from the audience through their adherence to their out-dated custom and culture. For instance, one teacher’s entering the classroom on a bicycle, or one of the masters being shot and stabbed by Travis and his friends during military practice, only for this to be later resolved by the boys apologising to him lying in a drawer in the headmaster’s study etc – these all make Travis’ ‘crusade’ seem more legitimate in the sense of his fighting authoritarian stupidity.

The viewer is constantly questioning what they are watching – the director making good use of the onset on the psychedelic – the line between reality and fantasy has to be drawn by the viewer – there is no definitive translation of the film – you simply have to put your faith in Travis and follow the rollercoaster that plays before your eyes – an absurd montage of mortarboards, bullying and bullets – You simply make of it what you will.

Such use of symbiotic character-groups, opposites brought together by one narrative, works to disorientate the viewer even further – often making the film even more intoxicatingly bewildering – constantly challenging you to decide, as the tag-line for the film runs; “Which side will you be on?”

As one publicity quote on some of the posters revealed, the viewer can perhaps not help but be subjected to two different sides of the coin – two different emotions; “It makes you laugh as your blood chills.”

But whatever the intricacies of your particular interpretation of the events of the film, one thing is for certain – it will leave an impact. It is to Anderson’s eternal credit that the film still packs a strong blow to the stomach and the head forty-two years after its release. The final shot of Travis, now emancipated, free of his white collar and straddling the rooftop with Bren gun in hand and armed female (Christine Noonan) beside him, represents the very antithesis of authority and discipline that he has endured, the anti-Christ, mercilessly killing those fleeing the chapel.

Equally this is the enduring image of a film that oddly has a very modest place in the public consciousness – I would argue that the themes this film deals with are as timeless as they are incendiary – as such it still retains the accolade of ‘a hand-grenade of a film.’

Even after the film has finished, Anderson still leaves important questions to be answered by the viewer, of which most are still facing us today.

As the camera slowly draws towards Travis’ face, frantically firing round after round the film suddenly and silently ends.

Once more, the viewer is left to contemplate; ‘if…’ 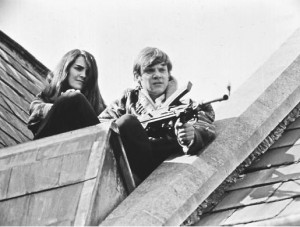