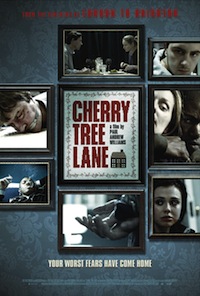 Middle class man and woman, brace yourself; Paul Andrew Williams’ micro-thriller is a technically proficient and psychologically aware piece of class baiting. You’ll recall that Cherry Tree Lane was once a place where Mary Poppins would ply her trade. Poppins, the apotheosis of upper-middle class domesticity, was as comfortable, prim and well ordered as her surroundings. By selecting the same address, Williams announces his intention to take a leitmotif of mannered living and soil it with blood and semen. His film, which never leaves the confines of the North London residence, bar a sinister low level establishing shot that dollies in on the front door like a wolf coming up the front path, is a sustained and uncompromising exploration of the terrors that scratch behind the eyes of Guardian readers.

You have to admire the precision with which Williams applies pressure to the exact points on the middle class body politic which he knows will cause the most discomfort. To frame the debate around Cherry Tree Lane in terms of shaking the kaleidoscope of the chattering Primrose Hill set, is to understand how vulnerable this particular group is to a moral, not to mention, sociological panic.

There’s no complacency amongst the nouveau rich; they live in segregated communities, divorced from lower socio-economic groups, precisely because of the simmering fear which frames the way their educated, socially mobile peers view their imaginary inferiors; a section of society which to their mind is degenerate, uneducated, lazy and brutal.  Worse than those regrettable vices, the underclass is hostile to authority. Is there anything worse than an amorphous mass of second tier humanity that has no deference to their betters and no respect for the rule of law?

As CTrL begins, and it’s an inappropriate acronym, because it’s the loss of control which preoccupies Williams, there’s a interesting tease in which the middle class parents of a wayward son exchange barbs over dinner in tight, suffocating close up – a recent affair still the hot topic, along with absent sprog Sebastian’s “druggy mates”. Why, we ask ourselves, would a nice boy like Sebastian fall in with a group of criminally predisposed proles? Well, says Williams, perhaps he craves liberation from a stultifying home life in which normally mannered parents encircle each other with frayed nerves and barely concealed rage.

When civilisation fractures, its noble patrons fall through the cracks into the gloomy underworld below. The couple’s idiot lantern shines on missives from the front line – Muslim terrorists, rape, murder; it’s a pipe leaking seepage from society’s putrefying corpse. Still, horrifying though this is, the couple can at least take comfort from being walled in with good wine, novels, subtitled entertainment and other high-minded pursuits.