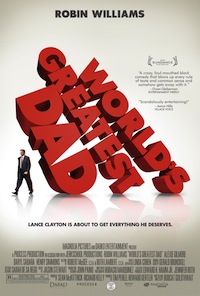 Presenting a moorish helping of delicious thick black ironies, Bobcat Goldthwaite, who’s chosen his profession as a comedy writer/director well, as such a moniker wouldn’t have suited a funeral director, has crafted a witty and literate mid-life crisis movie. In contrast with Sam Mendes and Alan Ball’s American Beauty however, in which the disillusioned Father withdrew into a adolescent anti-authoritarian fantasy while a carnival of grotesques quietly imploded around him – Robin William’s desperately lonely English Teacher suffers from the tyranny of normalcy, which impacts on every part of his life and marks him as a slowly withering irrelevance.

The set up imagines the marginalisation of William’s Lance Clayton’s as total. His son Kyle, unforgivably from a teacher’s point of view, is base, obnoxious, lacks intellectual curiosity and is sexually warped by pornography. Kyle tells his only friend Andrew that he’s a convert to German coprophilia. His gynaecological fixation serves a penchant for auto-erotic asphyxiation, providing a comic tease in an early scene, only to be revived later to more devastating effect. Kyle reads all his Father’s interests as degenerate and senseless. To add to his sense of estrangement, Clayton’s a failed author who’s had five manuscripts rejected and has endured the indignity of accepting commissions to write greeting card slogans in order to satisfy his industrious attempts at breaking through – the kind that appear on his (now aged and cracked) World’s Greatest Dad mug.

His poetry elective, in a neat allusion to Peter Weir’s Dead Poet’s Society, which also starred Williams, and which he neatly inverts by proving to be a less than inspirational presence in the classroom, is barely attended in contrast to popular teacher Mike’s creative writing class. Clayton’s girlfriend, a fellow teacher and some 20 years his junior, is a radiant but, it is suggested, shallow and slightly whimsical creature, who keeps their relationship under wraps in tacit acknowledgement of his lack of status and embarrassment over age difference. During a momentary liaison in a storage room, she gives the game away by noting that it’s like “being back in high school” – enjoying the thrill of a secret tryst with teacher, while acting out what appears to be a Daddy fantasy – over emoting like a naughty child and wiggling her arse to get her own way when challenged. Clayton knows he’s being played, not least when he sees her gravitate toward the younger and more handsome Mike, but is enjoying his own Nabokovian mid-life sexual revival and so buries his doubts – even when she shares her preference for Johnny Depp’s Willy Wonka over Gene Wilder; the abort code for many.

This would be a fine foundation for a comedy if that’s all there was, but Goldthwaite ups the ante considerably in the second act, when Kyle, in scenes usually confined to Michael Hutchence’s hotel room, advances too far in the art of masturbation and accidentally strangles himself. William’s discovery of his son, still suspended from the ligature attached to his computer chair, is genuinely shocking and surprisingly moving, giving the film a elephant sized dose of dramatic heft at the moment it looked to be just a bleakly funny meditation of middling American life. Williams proves that given the right material, shorn of the maudlin platitudes of the kind that used to frequent his work throughout the ’90s and nearly destroyed his reputation as a serious comic actor, he can hit hard. Clayton’s decision to hide the real cause of his son’s death and write him a suicide note serves to open up the film and from there, it’s as serious and satisfying as chuckles get.

Goldthwaite’s script risks much during the extended middle section and we’re rewarded with a finely observed study of projection and proxy grief. Kyle’s note is published, providing the genuine author with his first commission. The dead son becomes a blank slate onto which his peers, who detested him in life, project their own interpretation of his words. Williams’ schoolteacher becomes a focal point for collective “grief” and his profile skyrockets – his covert relationship being duly publicised in recognition while his colleagues, including Dr Pentola, an earnest grief counsellor, look to buy in to the Kyle phenomenon, either emotionally or financially. If the people who’d bawled their eyes out at Diana’s funeral had been educated in one place, this you feel, would be it.

Thus you have a fascinating and carefully observed satire on public identification with people they don’t and can never know and how an abstract idea of those individuals forms as a consequence; a fiction which is more potent and more relevant than truth to those that use such abstractions as a surrogate for their own beliefs and preoccupations. Kyle’s ”journal”, retrospectively written by Clayton in order to get something else into print, sets up a neat swipe at the Oprahfication of human interest stories – with the bereaved Father invited onto a similar TV show to share his memories of his tragic son and his hitherto unknown talent for profundity, with an audience of voyeuristic couch potatoes.

World’s Greatest Dad was co-produced by Darko entertainment, which won’t surprise anyone who can recall Richard Kelly’s near perfect distillation of high school loneliness. Dad successfully draws from the same well of otherness to ponder the emptiness of modern middle class life. That Clayton is a fan of Romero Zombie movies is appropriate, as he spends the film in the company of the living dead – empathy free, brain dead ghouls whose morbid interest is only aroused when he is, in the proverbial sense, suitably wounded and exposed. This being a morality tale, we’re assured that the truth will out, but this voyage through the moral maze is more entertaining and whisper it quietly, more profound, than most.