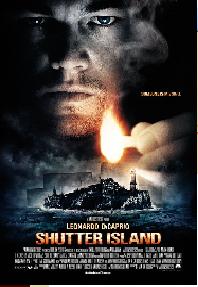 You Don't Have to be Mad to Work Here...

What can I say Scorsese? Shutter Island gripped me like a teenager clutching his first X-box controller (sweaty palms, concentration, the works). Crumpled in my worn-out cinema seat, with my hand lying in the cup holder, not even the discovery of some used and abused Wrigley’s spearmint could distract me. It’s almost a re-vamped Shawshank Redemption, just the in-mates are, well, insane and there really is no escape. Some chummy prisoners and a Rita Hayworth poster aren’t going to be of any use on Shutter Island, no matter how handy you are with a miniature pick-axe.

Teddy Daniels (Leonardo DiCaprio) and his partner Chuck Aule (Mark Ruffalo) embark on the case of a missing murderess, situated on the ominous Shutter Island; a prison for the mentally insane. After meeting Dr. Cawley (Ben Kingsley), the creator of the mental institution, it is obvious that something’s up (he’s that metaphorical itch you just can’t scratch), and as the corkscrew of a plot untwists itself from this crazy meets crime thriller, one is left questioning whether or not it’s all having a bit of a ‘cuckoo’ effect on Daniels himself.

Scorsese’s characterisation is exceptionally striking. One craves the story behind every inmate, sane or otherwise. Some appear deceptively sane (except for the grenade hidden in their pants undoubtedly) and others appear pretty much off their rocking-chairs. DiCaprio is sensational, gripping. In fact, you don’t want to let go. One is troubled by the constant presence of the three drowned children, floating like ‘logs’ in the river, Teddy’s erratic thoughts and dreams and the ringing of his words ‘Why you all wet baby?’ in our ears. The 138 minute runtime is successfully filled; at no one point did I feel I wanted to drown in my own beverage or choke on an abnormally sized piece of popcorn; in fact, I yearned for more and felt quite bereft as the closing credits slipped down the screen.

Between the flashbacks, clever distortion of time and the doubling nature of the characters, I would be lying if I said at no one point did I ask myself: ‘What the HELL is going on?’ But that’s the brilliance of it; you are completely lost to Shutter Island. As lost as Daniels. If this film was an ice cream truck, you’d have no idea what flavour you’d be getting, even if you asked specifically for strawberry. Get it? There is no strategic, clichéd storyline or pattern of events; it just comes at you, like I smashed an ice cream into your face when you weren’t looking. It’s a mess of information; yet a controlled mess, with Scorsese behind the wheel.

This film made a serious impression on me, in fact I wouldn’t be surprised to look down and see a Shutter Island shaped dent in my side. It was, therefore, unfortunate that so many of my friends had not seen the film, as I was rejected in my attempts to discuss and explore this creation with them (thankfully this film review outlet has cured such a problem).  It was with desperation that I, therefore, took up Dennis Lehane’s novel Shutter Island in which the film was based from. It is rare that one is able to state, with reasonable clarity, that the film’s adaptation is a tribute to the storyline, with no swaying from the plot set by Lehane, but this was and I relived the story via some type of double vision or pair of varifocal spectacles; through both the eyes of Lehane and Scorsese.

If you have any sense this film should be at the top of your ‘to do list’, above washing the dog, taking the kids to Disney Land Paris and hiding your husband’s cigarettes. It’s time to have a break and Scorsese’s well-constructed world on Shutter Island is the perfect place to forget all and indulge in a thriller that’ll knock your nylon socks off. Also, it’s probably best to bring a neck brace with you as the jumpy nature of the film is just begging for an upper-neck sprain.