Feature: The Impact and Future of 3D Film

Picture the scene. You’re sat in the local cinema, lukewarm trough of popcorn in your lap, enough Pepsi by your side to drown a buffalo, waiting for the latest offering from Austrian über-auteur Michael Haneke to fill the screen. The lights dim and the title flashes up seemingly inches from your face: The Piano Teacher 3D.

It may be hard to imagine how some films, tales of sadomasochistic musicians included, would benefit from the apparently game-changing addition of a third dimension, but Hollywood is adamant that 3D is the next stage in cinematic evolution. So what does the future hold? Is digital 3D the most important technological development since the advent of colour film, or is it merely a gimmick to get a public financially crippled by recession back into the multiplex?

Whatever the answer, we’ve been here before. In both the 1950’s and 80’s, Hollywood, threatened by the advent of home television and home video respectively, tried to convince the cinema-going public they were missing a dimension. But, despite even Alfred Hitchcock dabbling with the technology for 1954’s Dial M for Murder, the legacy of these aborted stereoscopic wonders is one of nausea and immersion-breaking attempts to hit their audience square in the face.

During both its previous in 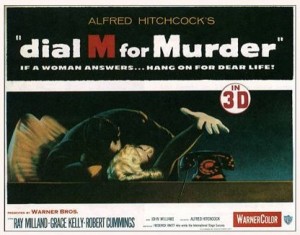 carnations, 3D proved to be almost solely the domain of schlocky horrors such as House of Wax or the gimmicky Jaws 3D – a film notable only for making cinema’s most famous shark look less realistic than its 2D incarnation. Indeed, as evidence of the poor quality of Hollywood’s previous dabbling with 3D, the most successful film of these periods was the soft-core skin-flick The Stewardesses, which earned $27 million from a meagre $100,000 budget.

But, as Jeffrey Katzenberg, CEO of Dreamworks animation – creators of the Shrek series and the recent animated hit How to Train Your Dragon – states, ‘this is not your father’s 3D.’ This time around, Hollywood plans to do more than simply have the psychopath’s axe jut out over the front row. Although, as the release of My Bloody Valentine 3D has shown, there’s still room for schlock.

Despite the resurgence of tri-dimensional blood-letting, Katzenberg seems to have a point; one which is lent a great deal of credence by the blue elephant in the room. With Avatar revolutionising the technology involved, kick-starting the ongoing trend for 3D films, and grossing over $2.5 billion in the process, James Cameron’s opus has made it almost impossible to ignore the impact of those garish glasses. If digital 3D is to be the next stage in cinematic evolution, then Avatar is its Jazz Singer.

In sharp contrast to past implementations of three dimensions, where the effect was, in the words of critic Roger Ebert, ‘used to hurtle objects and body parts at the audience,’  the buzzword among the latest generation of 3D advocates is ‘immersion.’ The idea is that 3D should be used to draw the audience into the picture, and that every genre of cinema, rather than solely the traditional realms of horror, animation, and fantasy, can benefit from the new technology.

‘I believe that almost any movie benefits from 3D,’ says Lord of the Rings director Peter Jackson, currently shooting the first film of a projected Tintin trilogy in digital 3D with Steven Spielberg . ‘As a filmmaker, I want you to suspend disbelief and get lost in the film; participate in the film rather than just observe it. On that level, 3D can only help.’ 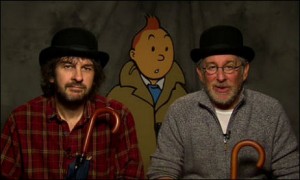 Jackson and Spielberg aren’t the only high-profile director to join James Cameron on his stereoscopic bandwagon. Martin Scorsese also sees 3D as the inevitable future of cinema. ‘I’d love to do one,’ he says. ‘It just seems natural that we’d be going in that direction. It’s going to be something to look forward to, but to be used interestingly.’ Like Jackson, Scorsese also sees 3D as a technology that can be applied to all genres. Referring to Lee Daniels’ Oscar-nominated drama, he remarked ‘why couldn’t a film like Precious be in 3D? It should be.’

With support from cinematic heavyweights like Scorsese, Jackson and Ridley Scott, whose upcoming Alien prequel is to be shot in three dimensions, digital 3D certainly has every chance of breaking out of the schlocky depths that marred its previous incarnations. Indeed, Michael Lewis, CEO of Real D, a company that equips cinemas with digital 3D technology, believes that high quality 3D dramas, on par with the best conventional cinema, are not far off. ‘Over the next couple of years,’ he says, ‘we’ll get our Gone with the Wind and our Citizen Kane,”

It may be some time before our screens are graced with a three-dimensional dramatic masterpiece, but 3D is already being firmly embraced in the animated genre. With computer animation now the norm, studios such as Dreamworks have found the move to three dimensions relatively painless and especially lucrative. Jeffrey Katzenberg has stated that the studio will not make traditional two dimensional films in the future, proposing that 3D filmmaking is ‘the greatest innovation to occur in the movie business in seventy years.’

With almost every upcoming animated film, from Pixar’s Toy Story 3 to Sony’s Steve Carell-starring Despicable Me, being released in 3D, it seems most animation studios agree with Katzenberg’s assertions. Indeed,  the new technology is so firmly entrenched in the genre, the next generation of children may very well scoff at the idea of viewing work from the likes of Hideo Miyazaki – director of the Oscar winning Spirited Away and an opponent of 3D animation – in two dimensions. 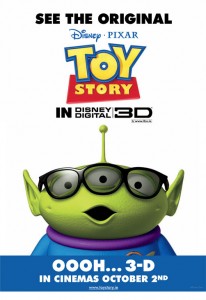 Katzenberg may stress the aesthetic possibilities offered by the move to three dimensions, but, with 3D screens accounting for over half of the Oscar-winning Up’s $700 million-plus box office haul when only around 10% of US and UK cinemas at the time were digitally-equipped, there is certainly a financial angle to Hollywood’s championing of the technology.

John Lasseter, executive producer at Pixar and director of the first two Toy Story films, is more cynical about the appeal of the new technology to studios and cinemas. ‘Theatres [have] started recognising that with digital they could do 3D far more easily than with film. And what’s exciting about that right now is that you can’t get it at home. That’s why theatre owners have been investing heavily in it.’

3D films are succeeding in drawing the public back to the cinema in the midst of a recession, but, as Lasseter suggests, the technology simply isn’t in place to recreate the 3D experience at home. Although 3D-capable televisions are on sale in the US & UK, there are one of two proprietary technologies used within each set. In an echo of the Blu Ray/HD-DVD format war, early adopters of 3D home cinema could be burned when one format inevitably becomes the industry standard. Couple that to the increased costs of the equipment – a mid-range TV, 3D-capable Blu-Ray player, and one set of glasses costs upwards of £2,000 – and Sony CEO Mark Stringer’s supposition that ‘3D is clearly on its way to the mass market’ strikes as more than a touch hyperbolic.

Even so, the projected slow uptake of 3D in the home cinema market is little cause for concern for studios. American financial advisors Piper Jaffray have estimated that the 3D market, even without the widespread proliferation of 3D Blu-Rays, will be worth around $25 billion by 2012. As evidence of the dimensional renaissance the filmic world is currently in the midst of, the 2008 pre-Avatar takings of 3D films was around $300 million.

Another bonus for studios is the fact that 3D film goes some way to counteracting the issue of piracy. A 2006 study by the Motion Picture Association of America (MPAA) purported that piracy cost the worldwide film industry around $20 billion per year. Given today’s wider availability of high-speed internet, it is reasonable to assume that figure will have risen. With the vast majority of piracy originating with someone recording a screening, the fact that, as Katzenberg puts it, ‘you can’t camcorder 3D,’ comes as a huge plus to the industry.

Of course, not everyone sees 3D as the future of film. Discussing Avatar, film critic Mark Kermode dismissed the new technology as nothing more than a gimmick. Although he admired Cameron’s tri-dimensional epic, he stated that ‘all the things that were impressive about Avatar were nothing to do with three dimensions.’ Kermode, buying into Cameron’s portrayal of the technology, seems to have been expecting a revolution; something to rival the introduction of sound. Instead, Avatar’s three-dimensional vistas are evidence of an evolution more akin to the advent of colour film.

‘The future is flat,’ proclaims Kermode. ‘You can go back and look at Cameron’s old movies, you can see the chase scene from Terminator 2 – does it need to be in 3D? No, because you’re involved in the drama.’ Of course, replace any reference to 3D in Kermode’s rant with the word ‘colour’ and he could b 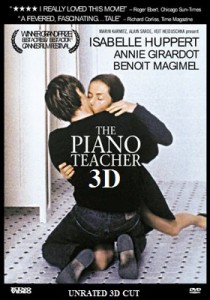 e a critic from the 1920’s, berating the ‘needless’ addition of Technicolor to the likes of DeMille’s The Ten Commandments.

The truth is, despite the protests of critics or anyone else, 3D is here to stay. With the firm adoption of the process by animation studios and the sheer volume of capital that has been thrown at the technology by the film industry, there’s simply too much at stake for a repeat of the 1950’s and 80’s to be allowed to occur.

So, is 3D the future of cinema? Simply put, no – great films are; 3D simply provides another tool with which to make them. But, with directors of Jackson and Scorsese’s calibre willing to experiment with the latest incarnation of the technology, there’s every chance the notion of The Piano Teacher 3D might not prove quite so laughable five years down the line.