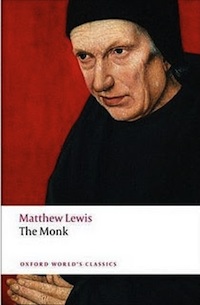 I should begin by stating that this review contains the odd spoiler. It is kind of hard to say anything remotely witty or interesting about a book like this if you constantly have to say ‘I don’t want to spoil the ending.’ I do, however, promise not to spoil the ending. This is, after all, a book about incest, rape, bleeding nuns, demonic pacts, ruined castles, German bandits (my favourite kind), thwarted love and murder. As you can imagine, there’s lots to talk about.

The monk in question is Ambrosio, supposedly the brightest light of his secluded Capuchin monastery. For someone allegedly so learned and, well…chaste, he puts up a pretty feeble fight when mysterious, seductive Matilda appears to corrupt him, it’s almost as if he wanted it to happen. This is, in all honesty, possibly the most creative monk-seduction ever accomplished. We’ve all done strange things to meet eligible men, but dressing up as a monk and getting poisoned by a snake takes things to a whole new level. Spiritually, things go downhill quickly for Ambrosio after his initial slip up. Matilda is definitely not all that she seems, and once he sets eyes on the innocent Antonia, his fate in fiery hell is sealed. Unfortunately for Ambrosio, as if being a sinister monk is not enough to hold him back; Antonia has a suitor in the form of the dashing Lorenzo, and a very overprotective mother.

Antonia is this reviewer’s least favourite character. Being beautiful sweet, charming does not make up for also being completely, frustratingly naïve. It is often the case that the more innocent a character, the more exasperating they are to a more corrupted reader. I think Lewis probably found her annoying also. Poor Antonia, she really didn’t stand a chance, and as I couldn’t quite bring myself to think she got what she deserved, I made a damn fine attempt at blaming the parents. With a mother who went as far as editing the bible of its juicy bits before she let her daughter read it, Antonia was never going to have the savvy to escape Ambrosio. She is the captive lamb in Matilda’s slaughter of the flawed monk.

The second plot strand of this gothic delight is provided by Lorenzo, Agnes, and Raymond. The monk-lust is just not enough. The discerning reader also demands a story-within-the-story of Raymond’s adventures in Germany, a tragic tale of how his love for Agnes (Lorenzo’s sister, keep up now) resulted in a haunting from a ghostly bleeding nun, and Agnes, with child, imprisoned in an abbey. Happily, these are not your average gothic bit part players; the reader genuinely invests in their story. Agnes in particular, with just the right blend of worldly innocence, could almost be a well rounded, fully fleshed out character, or the closest thing you get to that in a gothic novel. The scenes of her starving at the hands of hypocritical nuns are among the most heart-breaking of the novel. Yes, there is heart break, misery and death. Lorenzo even pines for all of two pages over Antonia’s death, before finding consolation in the arms of Virginia, another hot novice conveniently also rescued from nun-evil to tie up Lorenzo’s romantic loose end.

(Sorry…the reviewer would just like to take a moment here to reassure the more serious reader. Despite the apparently flippant tone of this piece, the reviewer is perfectly aware that 18th century literature is a serious business, and there are some genuinely spine tingling, emotional scenes in this novel. Ignore said reviewer’s tone; she thinks she is being amusing. Please, continue…)

While The Monk is primarily about Ambrosio’s downfall, it is a richer novel for the sub-plot. Parts of these are more vividly wrought than the monk vs. the devil idea, which can feel a little hackneyed. Though of course, what feels clichéd to the modern reader was completely new and fresh circa 1796. Not to mention probably absolutely terrifying. Ambrosio is creepy; I think if I had bed curtains, I would definitely have nightmares about him leering behind them. The Monk was, understandably, very controversial at the time of first publication. The reviewers obviously loved it, for that very reason. Even Coleridge weighed in on the debate. He agreed with me, calling the under-plot of the bleeding nun ‘truly terrific’ (it is the best bit). This is part of what Lewis does so skilfully, taking elements of traditional supernatural tales, subverting them and blending them with fresh ideas. The Monk was in fact the first novel to feature, well, an evil monk, paving the way for the likes of the much more well known The Hunchback of Notre Dame.

So you see, it is easy to write The Monk off as the adolescent fantasy of a teenage boy. Written by Matthew Lewis, in just ten weeks, and before his twentieth birthday, this novel has all the hallmarks of being penned in some kind of erotic fervour. Except for the fact that it remains the best thing he ever wrote. And, while I can imagine many a teenage boy (I’m sorry, as I don’t know any teenage boys I’m generalising massively) getting all excited at the idea of corrupting beautiful maidens, what if the maiden in question was their sister, who they later murder in some catacombs? I don’t think so somehow. This book is a lot cleverer than pure titillation.

Gothic Literature is often underrated. Yes, there is a certain formulaic aspect to the genre, which regular readers may recognise in The Monk. If you’ve read any Ann Radcliffe or German romantic literature, you might find yourself prepared for some of what I can only describe as mad plot decisions, only in The Monk they’re better and sharper, with ever so slightly less bad poetry (skip the poetry). However, if you’re new to all this, then you are the lucky one. The Monk is the perfect introduction to the absolutely mental world of the Gothic novel. I guess what I am trying to say, in a round about way, is don’t think of Lewis as the eighteenth century equivalent of a writer of disposable airport thrillers. He created something quite unique, and like Mary Shelley, it doesn’t particularly matter that he never repeated his triumph.

This review is for everyone out there who thinks eighteenth century literature is dull, and full of virtuous maidens and honourable gentlemen. To you I prescribe The Monk, to be read in its entirety one night, under the duvet by candle light. And, if the duvet should set on fire, consider yourself lucky at having been saved from enduring a truly gruesome climax.