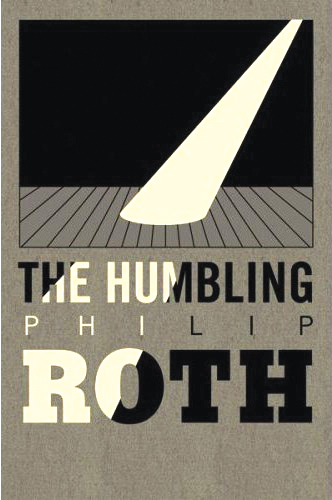 Phillip Roth’s 30th book is an overblown novella about self-loathing. Roth wants to talk about creeping around in someone else’s skin, fractured Ids and psychosexual malfunctioning and so he does but it’s not much of a conversation, more the author talking to himself in the register of an amateur shrink.

His protagonist, Simon Axler, is a stage and screen actor of some note – an alumnus of the Actor’s studio that produced real world luminaries like Paul Newman. Axler is suffering from a crisis of confidence and finds he can’t act. His agent assures him that it’s happened to the best of them, including Olivier and Gielgud, but Axler finds that he can’t inhabit his characters any longer, perhaps because he’s struggling to be himself.

Trapped in a failing marriage of the kind that Roth himself may have experienced, Axler is plagued not just by desolation but with a suicidal impulse. So overcome is Axler by the compulsion to put his hunting rifle in his mouth that he checks himself into a psychiatric hospital, all of which sets up the circumstance by which he will be judged when his first wife is dispatched in a single paragraph and a new, younger lover appears on the scene with identity problems of her own.

It’s not hard to imagine there’s quite a bit of Roth in Simon Axler. Both are of similar enough age for one to realistically be a channel for the other, though Axler is younger in service to a plot that has the actor being ridden by a woman some twenty five years his junior.

There’s more than a touch of Nabokovian cynicism in Roth’s treatment of this uncomfortable relationship. Like Nabokov, Roth punishes his older man for being naive while simultaneously empathising with the character’s loneliness and lust for the younger woman. Meanwhile, Pegeen, here forty years old but quick to be cast as infantile and heterosexually virginal, has all the vices from the Laughter in the Dark playbook. She’s fickle, vexatious, exploitative and primed for casual cruelty. Axler may be broken but he’s made of marble, whereas Pegeen, “a naïf” in Roth’s parlance, is merely a walking sexual fantasy who carries with her the inevitable emptiness that a man will experience following any act of desperate masturbation.

Roth’s narrative is short and punctuated with lots of psychosexual exploration, all of which serves to keep the pages turning nicely. The problem is that you don’t believe any of it for a second. The author’s taken a risk with the reader in having his protagonist’s crisis precipitated by a loss of creative zeal. The introduction of Sybil, a witness to her Doctor husband’s paedophilic transgressions with her 8 year old daughter and consequently committed by him,  makes Axler’s loss of inspiration seem trite and self-indulgent.

Roth goes on to draw uncomfortable parallels between Sybil and Pegreen by suggesting that Axler’s attraction is an extension of the same paedophilic imperative. She’s the daughter of some actor friends and he’s known her since birth. One mischievous line of dialogue from an adoring Pegreen, “You’re just what the Doctor ordered”, underscores this. If that isn’t Freudian enough for you, Pegreen has some issues of her own.

She’s a lesbian who, in what may appear to the reader an absurd complication, is broken since her lover, Phyllis, told her she wanted to become a heterosexual man and followed it up with surgery. When Axler catches up with Pegeen she’s seeing the female dean of the college, whom we infer she attached herself to in order to get her teaching job. She begins her affair with Axler and breaks it off with the dean, leading to charges that she’s “cruel”, “callous”, “abusive” and “selfish” from the obsessive ex-lover. Her parents, the only balanced and stable characters in the book, inform Axler that Pegreen’s always done exactly what she wants. From there she starts to talk up the fantasy of introducing a 19 year old into the sexual relationship and with the destination firmly signposted, Roth takes you exactly where you expect to go, though you get grubby en route.

It isn’t simply the morass of broken people and warped sexuality that makes the The Humbling a fantastical read but also the fact that most of the characters are indivisible from Roth’s Freudian narrator. In the early part of the story, Axler is talking suicide during a group therapy conversation. A fellow patient delivers the following thought on the subject,

“The more clinical point of view, which is neither punitive nor idealizing, is the psychologist’s, which attempts to describe the state of mind of the suicide, what state of mind he was in when he did it.”

Insightful stuff from a mental patient, I’m sure you’ll agree. In fact each character in Roth’s story seems to have learnt English from a psychologist, perhaps reflecting the great American obsession with therapy, perhaps because Roth couldn’t integrate these observations into his nightmare psychescape in a more organic way.

Axler’s agent Jerry, tells him that “you’re scared of failing. But that’s behind you. You don’t realize how one-sided and monomaniacal your perspective has become.” Well quite, who would? In fact Axler’s perspective is so one sided that he begins dropping these mechanistic musings into the mouths of other characters. In the book’s second section, Pegreen goes to see her mother and recounts the disapproving response she receives to a seething Simon.

‘It was in his interest to find out everything, to hear everything, even, if he had to, to here her say, “I couldn’t yet declare that it’s definitely the permutation I will always want.”’

Not to worry Simon, not much chance of her, or indeed anyone, saying that. Well, no one perhaps except the aforementioned ex-lover who turns up on Axler’s doorstep and declares that Pegeen is “a girl-boy. She’s a child-adult. There’s an adolescence in her that’s not grown up. She’s a cunning naïf. But it’s not her sexuality on her own that does it – it’s us. It’s we who endow her with the power to wreck.”

Perhaps the titular humbling is ours, as Roth is suggesting he has an insight into both the minds of men and women which we may struggle to match unless each essential layer of characterisation isn’t spelled out for us. This results in a story which has intriguing relationships but little verisimilitude. The final section is hilariously overwrought, encompassing enough examples of bad sex to fill a Literary Review shortlist twice over. “You’re on a horse,” Axler told her, “ride it”, is a sentence which will stay with you for a very long time, however much you may try to forget it.

At a mere 140 pages, The Humbling compacts plenty of action for the libidinous and sexually confused reader. It’s hard to escape the feeling however, that this may be less a novella and more Mr Roth’s exploration of his own theories on identity and sexuality with the character’s spewing it out like a set of ventriloquist’s dummies. It may not ring true but it’s certainly an entertaining visit to the theatre of the absurd.