Book Review: All My Shows Are Great – The Life of Lew Grade by Lewis Chester 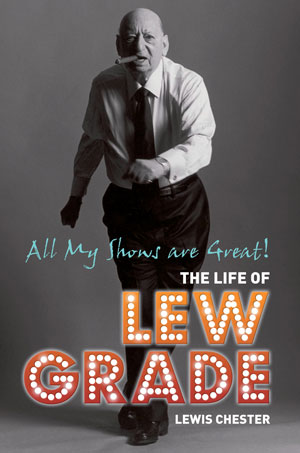 The image of Lew Grade that adorns the cover the of Lewis Chester’s witty and well-researched account of the late media mogul, is suitably showbiz. The one time champion of the Charleston is mid-jig, with his (one imagines) expensive watch tipped toward the lens and a trademark Montecristo protruding from his chat hole. That the agent, TV impresario and movie producer used them as a prop to foster an image of confidence during business negotiations and calm his nerves is just one of the nice revelations in a tale which is as much a history of commercial television in Britain and the country’s contribution to the movies of the 1970s and 80s, as it is of the stout businessman on the cover jacket.

Chester’s overview of Grade’s early life is long on detail and thankfully short of excessive editorialising or ill-advised forays inside the mogul’s follicle free head. It’s a straightforward account of Grade’s first dance steps into the entertainment world and the fledging Winogradsky Empire, before he anglicised his name for business expediency and added the ‘e’ after a journalist’s typo showed him what it looked like in print. Not only that but Michael Grade, his nephew and the man who inverted his Uncle’s populist touch by putting Doctor Who on hiatus in the mid-eighties, doesn’t even turn up until page 54.

Only occasionally in these early chapters does Chester stray off topic, evoking biographical cliché in tying Grade’s life to a retrospectively poignant but ultimately irrelevant historical backdrop. We learn, for example, that “Lew’s romance with Kathleen Shelia Moody began shortly after Hitler’s army invaded Poland.” Not a problem for the courting couple as they met in London’s Leicester Square. We also discover that Lew’s Father, Issac, rented the family’s first British home in London’s Brick Lane for eight shillings a week. That’s a nice detail, inviting the reader to consider subsequent inflation and chortle about the greater value of money in those days but there’s no annotation to put the figure into context, rendering it a sentimental device designed to stimulate the part of your brain that compels you to say things like “gosh, it was a different world back then, wasn’t it?”

This is, however, a fascinating story for those interested in the history of British Television, drawing upon an Aladdin’s cave of first hand accounts. Grade may have been the enemy of high-culture, decimating Reithian attitudes towards broadcasting like showbiz’s answer to the Blitz, but the book reminds us that he was also a very, though not always intentionally, funny man. Hardly Peter Ustinov in the raconteur stakes, he nevertheless had a gift for quick-witted lines – including the now legendary assessment of his big-budget bomb, Raise The Titanic – “it would have been cheaper to lower the Atlantic.”

Chester gives an account of that disastrous production, including the Maltese water tank which was too small for the model of the ship it had been built to contain, but also provides insight into Grade’s other business interests, particularly his time as a theatrical agent for which he dryly remarked that “the clients got to keep 90% of my earnings.”

What may surprise those who aren’t already familiar with Grade’s impact upon television is the degree to which he can be celebrated, or, depending on your point of view, blamed, for the ITV network that Britain enjoys today and by extension all commercial broadcasting in the UK. Chester has done a scholarly job of trawling through a wealth of old sources, including government reports, newspapers and interviews, in order to place the achievements of the man they once called “Mr ATV”, in lieu of his populist polyp of an ITV franchise, into context. All My Shows Are Great, named with reference to a typically modest refrain from Grade, recalls the difficult birth of the commercial network, with establishment figures like Lord Esher, memorably writing off its output as “a planned and premeditated orgy of vulgarity.” On to this stage, enter the schmoozer, who uses his extensive theatre contacts, built throughout the 30’s and 40’s to keep that orgy hot. He’d introduce the British public to what some even dared call the joy of variety, in the form of Saturday Night from the London Palladium, and later, based on the American model, he’d invent the nation’s viewing habits with the introduction of prime time and regular weekly scheduling. It’s possible to trace a line that runs all the way from Lew Grade to Ant and Dec’s Push the Button and your view of such fare will determine whether you buy this book for yourself or as a birthday gift for a much loathed partner of a friend.

This is a fascinating portrait, not just of the man but of the industry in which he played such an instrumental part. Who knew, for example, that in the days of the BBC monopoly, with Television a then highbrow status symbol amongst the wealthy middle classes, families might change into tuxedos to watch a transmission of the opera? Chester’s account of the mogul’s common touch, recalled via well chosen anecdotes from those who worked with him, introduces us to a man who was savvy enough to know, whatever the critics said, that working class families were unlikely to regard TV with the same reverence and craved simple escapism from harder lives.

One commentator, with reference to the critical derision heaped upon Grade for his predilection for game shows, broad comedy and fantasy series like Thunderbirds, Danger Man, Department S and The Champions, had it right when it noted that “the only people that seem to like Lew Grade’s shows seem to be people.”

The weighty middle section of the book, perhaps modelled on the portly subject, invites you to reflect upon how little Television has changed, which will be a surprise to those that imagine that all our current difficulties stem from the post-deregulation era of broadcasting. It’s reassuring to know that then, as now, The Conservatives were prepared to punish the BBC for a perceived left wing bias, particularly the Prime Minister’s belief that Auntie’s coverage had lead to the Tories 1945 ballot box massacre. As a result, backbench bloodlust toward the corporation was allowed to ferment by Churchill. The successful lobbying of government and creation of a rival commercial network to the Beeb was the result. I know, and you’ve always regarded Churchill as a hero haven’t you?

Chester also invites comparisons with the contemporary scene when he considers Grade’s attitude toward ITV’s primetime output, namely the belief that the network should aggressively schedule populist programming against the minority interest shows which the BBC would broadcast in the same time slots. A government review, the Pilkington report, resulted, leading to changes in the way the commercial network was regulated until the 1990’s. That reverse returned it to a lawless cultural backwater with little or no public service obligations in which a pre-Pilkington Grade would have thrived.

Grade’s stewardship of ATV lead to changes in the type of programmes the corporation made in response. When we talk about the role of the BBC today and the perceived dearth of quality programming on the ITV network, Chester’s account reminds us that the arguments as old as terrestrial television itself.

Lew Grade’s contribution to the movie industry, though less successful, is given due reverence – or should that be reference? Although his involvement in saving the classic Long Good Friday is noted, it’s the aforementioned Raise The Titanic with which he’ll always be associated. The adaptation of Clive Cussler’s novel, which contrived to horrify the author and audiences alike, can be seen as the quintessential Grade experience – overwrought, as subtle as a brick through a windscreen and a glorious exercise in balls out financial risk. However, like the man himself, so vividly brought to life by Chester, there’s much affection for it. Grade may have sunk quality television but for a time, nothing could sink Lew Grade.