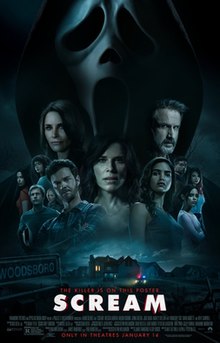 Being a sensitive flower, I wasn’t a horror fan in 1996 but Wes Craven’s Scream was the movie that changed my mind. It was a slasher for cinephiles – maybe all kinds of philes (we never know who we’re sitting next to do we?) that deconstructed the genre while celebrating it. Craven was the perfect partner for writer Kevin Williamson, because he married the craft of scaring an audience with the screenplay’s knowing commentary on genre clichés. It was fresh, it was exciting, and it had a little something to say about how nihilistic, brutal exploitation flicks that indulged in eviscerating young, beautiful, sexually active teens, frustrating nature’s plan, triggered a disposition toward violence in adolescent men who’d been dropped on the head as babies.

Well, that was then. Thereafter a further three movies were made – all directed by Craven, that justified themselves by extending the meta-commentary to sequels, horror movies based on real events, and the notoriety that comes with being associated with true crime. Whatever the pretext, Craven – try as he might, could do little more with the meat of the movies, namely the stalk and slash murders, than apply his skill in building suspense and executing dynamic setpiece kills. This, whatever the sequels were ostensibly about, contributed to a sense of diminishing returns and conceptual exhaustion, and consequently no one’s been screaming (except inside their own heads) for the last decade.

Now we have Scream 5, irritatingly, as the movie itself naturally comments on, as just plain old Scream – a fifth foray into the never ending story of ghostface copycats that demands the question, “why are we back doing this shit again?” The pretext is, you’ve guessed it, legacy sequels – a.k.a. soft reboots – here branded “requels” – an imprecise label we must hope fails to stick.

Like its predecessors, the movie’s precise spin on itself is unknown until the final act, which means that for most of the running time we’re asked to subsist on the thin gruel of derivative staging, familiar situations, and genre fan commentary on legacy sequels and Hollywood’s creative bankruptcy. The calculation is that we’ll be so charmed by this knowing critique of franchise extension that we’ll fail to notice the movie we’re actually watching has nothing but commentary to offer.

What we miss is Wes Craven’s ability to deliver the kind of movie he’s dissecting while dissecting it. The directorial duo taking over from him – Matt Bettinelli-Olpin and Tyler Gillett – who dedicate their inferior copy of his work to him, a posthumous slight – have fun appropriating and occasionally lampooning his style (there’s an effective sequence in which the character named after Craven opens a number of doors at a right angle to camera, only for nothing to be waiting on the other side when they’re closed) but they miss the master’s touch when building the requisite suspense. Scream 2022 is all release and no build up – scene after scene of bloody violence without the careful staging required to make each death felt rather than just observed.

Scream, along with Matrix Resurrections, signals that we’ve moved into a new era where legacy sequels, in a bid to keep the wolf of audience weariness from the door of indifference, refer to their conception while sticking to the strategy point for point. This, as Scream 2022 notes, its tongue planted in our cheek without our consent, is fooling no one.

That doesn’t mean it’s over of course – the cycle has some way to go yet, dull new characters rubbing up against ones we care about – the torch passed (the handling of which in this movie sets up the one joke that lands), the original story retold with variations. But once audience awareness bleeds into the material – Hollywood’s tacit acknowledgment that they’re pushing their luck – it’s usually the beginning of the end. Scream 2022 gives you hope that nostalgia bait will soon go the way of the unreconstructed ‘70s and ‘80s slasher movie. It’s the hope, not a knife wielding maniac, that kills you.