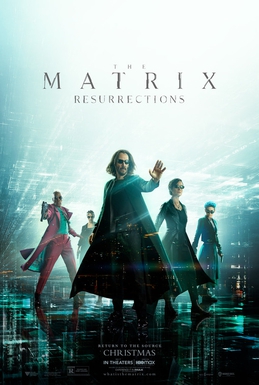 Perhaps it was inevitable that Hollywood’s push for reboots – its lust for reviving old and browning IP, would lead to some kind of pseudo-artistic backlash, but who’d have thought it would take the form of a legacy sequel no one wanted, made by a legacy director who, on this evidence, found the idea obnoxious?

The Matrix Resurrections is provocative, but not in an intellectual sense. It simply demands you try and reverse engineer its conception. This isn’t because it’s a mesh of stylised action and cod-philosophy like its two un-loved and, until recently, forgotten predecessors. Rather, it’s one of the most passive aggressive mainstream movies of recent years – a film that both mocks the expectations of its imagined audience and the crude franchise revival imperative of its financial backers – named and shamed in-movie, as “parent company Warner Bros.”

What Warners make of this deeply cynical and creatively bankrupt sequel, Neo alone knows. But they surely must regret giving returning director Lana Wachowski creative autonomy. Deep down, they must also wonder if they shouldn’t have bypassed her directly and hired someone who had genuine enthusiasm and a vision for the project – apparently missing that Lana, the returning half of the original directing duo, her sibling openly rejecting a revival, had only agreed to do it so that someone else couldn’t.

When a director takes a job to protect her intellectual property from the predatory forces of evolution and innovation, because she knows the studio will make the film anyway, we can infer she’s motivated out of a noxious combination of vanity and grievance. The result is Resurrections – a story with a boilerplate plot (old lovers overcome obstacles to reunite) onto which has been grafted a witless diatribe in which the film rallies against the forces that brought it into being while admonishing the audience for being stupid and artless enough to take the bait.

During a jarring first act – at once more irreverent and indifferent than anything in the first three films, Wachowski is committed to gnawing at the hand that feeds her – be it audience or studio. Matrix Fans might have anticipated that a twenty-year gap may produce a sincere attempt at reinventing action – of pushing the potential of visual effects technology, to recreate the same wow factor that greeted the original film. Instead, the visuals are derivative and, in both staging and conception, outright lazy – more TV movie than blockbuster. If projecting the original red pill/blue pill scene onto the set while a similar sequence plays in the foreground was thought to be a joke – a literal flagging of the reboot plot’s repetitive scheme, then it backfires as instead the audience is left to wonder why Wachowski was preoccupied with sending up the lethargy underpinning the project rather than making an effort to innovate the concept.

That, if you’re being generous, is the only innovation in this sequel. It’s wearingly self-aware; talk of completed stories compromised by unnecessary extensions, sheeple comforted by nostalgia, etc – interspersed with ugly, messy action vignettes, many of which look to have been shot on DV and choreographed on Zoom.

Wachowski, it seems, thought that putting the love story between Neo and Trinity front and centre would sidestep the twin problems of developing the confused and pious mythology cranked out in the sequels, and upping the action ante. This way, the film has the illusion of being about something, despite the conspicuous lack of chemistry between the leads, while licencing the filmmakers to mock the desire to relive the experience of old.

Some will laud this approach, saying it’s a bold satire of Hollywood’s creative anaemia. Others, however, will note that eye-rolling and going through the motions to rubbish the investment made on both sides of the camera, is the filmmaking equivalent of a critical hatchet job. The movies may be dead, as one of the smug meta-heads in Resurrections points out – an expression of the bleeding obvious – but nothing is likely to expedite putrefaction faster than films that celebrate their own ontological cynicism. No wonder Keanu Reeves was happy for people to view this one at home – the joke plays a lot better when you haven’t gone out to be insulted.

Certificate: 15 for hatred of the audience, disdain for the studio that funded the project, and Neil Patrick Harris.