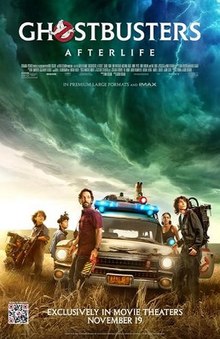 Warning: This review discusses the film’s ending from the start.

It’s amazing how the subconscious shapes movies. Take the decision by Jason Reitman, son of Ivan, to make a movie about a kid taking on the family legacy. Well, that you might think was a conscious choice, even a self-indulgent one. But that’s not what concerns us. It’s the notion that maybe deep down Jason Reitman knew this was a boondoggle – that a film built out of memories and reverence to his Dad’s most successful movie would be lacking something of its own. That, I suggest, is why Jason gave us the perfect metaphor for the whole doomed enterprise – the CG rendered ghost of Egon Spengler standing alongside the living but decrepit Ghostbusters – their vitality and irreverence dulled by time and familiarity. In that scene we have the whole of Afterlife.

One can argue about the use of Harold Ramis’s likeness; the crude manipulation of having his character appear to help save the day; the mawkish sentimentality of it all. For what it’s worth it’s a harmless cameo. Ramis would have no view on it because he’s dead and knew nothing of the movie into which Egon has been posthumously inserted. No, what’s relevant is the sight of a fairly photorealistic and necessarily mute Spengler and what his juxtaposition with those withered former colleagues says about Afterlife’s design. Here’s a nostalgic, soulless recreation of an element from Ivan Reitman’s 1984 film, supported by a subdued original cast. It looks right, it may even feel right for a few fleeting seconds, but it’s a lifeless spectacle. And worse, CG Harold Ramis looks healthier than Dan Aykroyd.

How the fuck do you revive Ghostbusters? It’s almost a question as deep as life and as murky as the hereafter. It’s not enough to replicate the iconography – Paul Feig’s witless remake proved that. Following Afterlife we know it’s not enough to literally give the fans what they think they want either, namely a reprise of the first movie – an inveigling into a mythos that was only ever meant to be a pipeline for jokes, with new characters trying to recreate memorable moments, straining to replicate the deadpan tone of Reitman senior’s megahit.

Ghostbusters is an attitude, a comic sensibility; high concept undercut by a certain bawdy indifference. It never had a heart like a Spielberg adventure nor an interest in identifying with its audience. Jason Reitman, with the best intentions, has inherited the mantle but misunderstood the appeal of his Dad’s film. He’s turned Seinfeld into Family Ties.

At least Afterlife, in stark contrast to Paul Feig’s string of badly improvised sketches, is a movie of sorts; its characters could pass as real human beings. There’s that sense of the ordinary punctuated by the extraordinary, with a few oddballs trying to make sense of it all. But if you extract from Reitman Junior’s film all the quotations from the original Ghostbusters, visual and aural, you’re left with nothing – just a family unit that doesn’t quite convince on the grounds that Egon, of all the legacy characters, is the one it’s hardest to imagine having a conventional brood.

If you’re Jason Reitman the Ghostbusters franchise is a hereditary phenomenon – that’s the connective tissue that links him to it. But in-universe it’s as conspicuous a retcon as the importance attached to throwaway jokes from the original – namely Stay Puft marshmallows, fireman’s poles, greedy ghosts (the spirit of Finn Wolfhard) and Venkman’s ESP test.

Maybe Jason Reitman thought, following the Feig disaster, that you can’t make a Ghostbusters movie without being reverent to the original, but such creative timidity robs Afterlife of any substance and makes tapping into the original’s disdainful treatment of genre, impossible. Making it a movie about kids discovering Ghostbusting and picking up the mantle must have felt right and looked good on paper (not to mention the fact it helps sidestep toxic discussions around gender) but it doesn’t take long to realise that it only amounts to a series of poorly disguised substitutions – a broke family for a broke group of fired academics, a small town for the city, a teacher and a single mother for the accountant and single concert musician that enabled the story’s big bad.

It’s a pity because Ghostbusters: Afterlife has a personable cast – though not a patch on the 1984 ensemble. In fleeting moments, with the kids getting to do their own thing and piece together the strange goings on around town, you can see a glimpse of what a genre hopping Ghostbusters, divested of any expectations linked to the original film, might have looked like. But this story doesn’t belong to Afterlife’s characters – they’re just passing through. Capturing the spirit of the 1984 film is a tough gig it seems. Remaking it again, for the second time in 6 years, under a different guise, doesn’t work. Perhaps it’s time that someone with the young Ramis and Aykroyd’s sense of humour, and the same tongue in cheek appreciation of genre movies, had a go.

Certificate: 12A for the movie telling us the Ghostbusters firehouse is a Starbucks only to show it as derelict and abandoned at the end, Gozer's fascination with Stay Puft marshmallows, and an inexplicable post-credits scene update on the Ghostbusters logo.