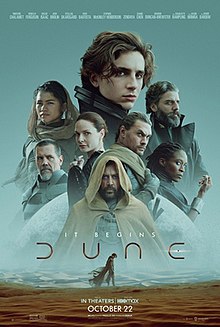 Warning: This review discusses the film’s ending. Though not, alas, the story’s ending.

When Denis Villeneuve says he can’t believe he’s still working, we have no reason to doubt him. Blade Runner 2049 was a magnificent failure: a film built entirely in service to the artistic, lyrical power of pure cinema, in an era where audiences have been conditioned over many decades to be spoon fed ideas and narrative beats – strictly to formula, without appeal to their intellect or imagination.

Of course, it flopped. Warners – the self-proclaimed director’s studio, invested in a box office dud but they understood that it was neither the material or the auteur who was at fault, rather the audience. There just aren’t enough contemplative, mature cinemagoers left to power a movie like the Blade Runner sequel. So what next for Villeneuve at the same studio – a small, personal low-budget film perhaps? Or maybe a middle-brow thriller in a tried and tested genre? No – inexplicably it’s a whopping $150m adaptation of Frank Herbert’s Dune – filmed by David Lynch in 1984, and released at the height of the decade’s sci-fi boom, to no interest whatsoever.

Okay, but Denis isn’t stupid, right? He’s learned his lesson from the Blade Runner experience. Mature audiences like his meditative style, the dream-like quality of his images, thoughtful pacing backed by pulsating, pounding, operatic accompaniment from Hans Zimmer, but this niche demographic don’t open movies or give them the legs to recoup sandworm sized budgets, so what’s the great man’s approach to this doorstop novel going to be? Why, it’s two and a half hours of meditative, dream-like beauty, punctuated by abstract talk of visions and prophesy – a Shakespearian succession drama spiced with interplanetary scale. Put the word out – someone at Warners has a gambling problem.

Dune is an exceptionally well-made film. It’s a fully immersive trip to other worlds, devoid of the infantilism or toy-selling ethos that’s marred Herbert’s imitators – most notably Star Wars. Watching it recalls other great filmmakers in their pomp – not the likes of George Lucas, but David Lean, Francis Ford Coppola. It’s a self-serious piece of work that invests both its worldbuilding and mythos with Baron-like weight. But it’s also a movie that’s as dry as Arrakis on a summer’s day. Villeneuve has retrofitted an old story with old-fashioned storytelling values, but given how low-key it is – now musing – one wonders if its commission wasn’t an Emperor-like attempt at removing a threat to the studio’s bank balance by definitively setting him up to fail.

Will Dune – can Dune, make any real money, or is there a ceiling on what serious entertainment in the era of Marvel can bring in? If it doesn’t, those who made the trip to Arrakis will no doubt be perturbed that the movie is, as billed in that opening caption – “part one” and has been written accordingly. Not for Villeneuve a film that hedges its bets, a la the original Star Wars, putting a crowd-pleasing battle at the close just in case the bigger story cannot be continued.

After nearly two and a half-hours in the company of Timothée Chalamet’s quiet and quizzical Paul Atreides, our reward is a knife fight between our hero and a man we’ve met minutes earlier. Sure, this is Paul’s induction into the Fremen – the desert people that will bolster our man in part two, but that assumes the sun will rise on part two. By the end of part one, we’re starting to get a dry cough.

Dune is great cinema then – a tangible, lived-in world full of political and religious intrigue – but goodness me it’s ponderous. I for one would welcome the concluding part and the discovery that lead to its conception, namely that like the Harkonnen’s underestimate of Fremen numbers – thousands instead of millions – it turned out there were many more serious filmgoers that the more cynical of us dared believe. But what, you ask, are the odds on that? Ask the secret gambler at Warners HQ – the guy who greenlit this movie then bet against it. He knows.