Book Review: Feminism for Women – The Real Route to Liberation by Julie Bindel 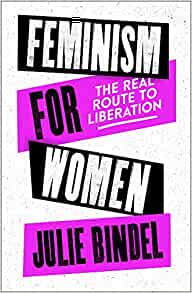 Julie Bindel’s fucking angry. She’s spent a lifetime campaigning for female liberation. Not equality as you’ve been conditioned to understand it, whereby men and women are judged by the same metrics, but the freedom for women to be judged on their own terms – emancipation from the most oppressive, most ugly, most aggressive social organising principle the world has ever known (which incidentally doubles as the only social organising principle it has ever known), namely patriarchy.

Bindel’s polemic arrives as a rebuttal to and corrective for what she sees as the sinister gerrymandering of the movement by identitarian activists. You may have heard them referred to as the woke brigade. This hijacking of women’s interests, for Bindel, has seen men appropriating female identity, the movement’s infiltration and misdirection by patriarchal forces, and the proverbial ovarian implosion – the seizing of the media apparatus by well-intentioned but deluded new lefties, brainwashed by the on-trend stylings of Berkeley academics, whose previous hits include political correctness.

For Julie, men can’t be feminists – that’s a category error that allows the wolf to brush past the door and head straight for the bedroom. A pity you may think, as conceivably, some men may be closer to the movement’s politics than some women. Men can be allies however, and this, for the author, means taking a subservient and passive role (those traits we used to code as feminine) en route to a wholesale internal reconstitution of their behaviour.

Men will only be cured of their regressive and imbecilic makeup, Julie tells us, when they can consciously reject their archetypal straightjacket, proselytise their fellow wangs to do the same, and reorder their thinking and actions to accommodate the experience of women whose experience of men has been defined by repression, violence and sexist microaggressions. Simple, you might think – so why aren’t more of us bepenised folk doing just that, eh?

It is because the wholesale reinvention of the self is anathema to most people’s nature, particularly if they’ve been acculturated into a privileged, normative role? Possibly. Or maybe such men, though admired by Julie, would find themselves very lonely indeed if they adopted a mindset that privileged the opposite sex’s conception of themselves – abundant inadequacies abound – over their own. Had I listened to my old girlfriends when it came to how I should think, feel and express myself, I’d have been not only be stranger in my own life but a set of gendered clichés. Julie, not all women have the insight or ideas to create better men, just men they understand better.

Men identifying as women may be a fallacy for Julie – a regrettable confusion between gender stereotypes and immutable sex characteristics, but men identifying with the female perspective – though Julie later concedes her sex class has no homogenous set of views, thereby restricting the useful cohort to those who’ve experienced men as oppressive – is desirable. In fact, it’s the only means for men to see their lifelong power trip for the narcissistic self-indulgence it is.

Much of Feminism for Women may lack nuance then, but its baseline assumptions are very strong indeed. Some men use violence and other forms of power – financial, legislative, sexual – to subordinate women and keep them down. Change is hard won and easily reversed by opportunistic interlopers. The majority of men are unlikely and unwilling to be convinced that their controlling interest in society is a price worth paying for a more perfect union of the sexes. Pornography and prostitution is the monetisation of male sexuality and women are deluding themselves if they imagine that by participating on their own terms they are empowered. Assuming they’re fortunate enough to opt in, out of cynicism rather than necessity born of material and social disadvantage, they’re actively colluding in a system that reinforces the exploitation of women by men. Internalised misogyny is a thing and it traps both men and women in a thankless cycle of archetypal expectation that ruins lives and infantilises culture.

Not all men – yes, I’m invoking that mantra –  buy into masculine tropes, mind you, but not all women are prepared to let them reject these so easily. Julie tells us that men who can’t embrace feminism, that is – integrate it into their psychological makeup and daily lives, aren’t “fully human”. The corollary must surely be that women who expect men to be “men” – at least if they’re to be desired and respected – are also a few DNA base pairs short of full species status.

On the subject of what makes us who we are, Julie’s analysis is not entirely coherent. Biological sex is immutable – this she’s certain of. But sexuality is not. There’s no proof of that, as Chris Morris once wrote for Brass Eye, but it is scientific fact. Julie chose to be a lesbian – or at least she thinks she did – so it follows that sexuality must be a choice after all. Why the certainty? Perhaps because Julie associates biological determinism with bigotry – the worst excesses of the organised religions she despises. But it’s patriarchy – religion of course being a mere branch – that is the chief offender.

Contrary to any ideas you may have around evolutionary imperatives, not least that most fundamental one – the instinct of a species to reproduce itself – we might all choose to be gay or lesbian (intermediate stages being a compromise adopted by cowed homosexuals) were it not for patriarchy’s suffocating tendency to maintain heterosexual relationships as an institution, as opposed to an expression of say, heterosexuality.

A cynic could read Julie’s tome and wonder if her certainty on sexuality being a choice isn’t somewhat defensive – the comforting lie that those who’ve dared to embrace this aspect of themselves have connected to an innate truth about the human condition, whereas the rest of us – though we may have been brought up in a liberal environment, with no social or domestic pressures pulling us one way or another – live a lie. No minority wishes to be a minority – better to believe in a universal condition that’s understood by some, namely an enlightened few – suppressed by everyone else.

Julie’s view on Owen Jones is that he’s a fair-weather friend to women, a faker – but she shares his fundamental belief, so often articulated in one form or another on the left – that the world would be a better place if more people understood what’s good for them and did the right thing. Most people are stupid after all. So stupid that they need a book to explain what feminism is and isn’t.

Feminism for Women is conditioned by personal experience. You can’t be Julie Bindel (and not just because that identity is taken) – and not believe that male sexuality is intrinsically predatory and sadistic, that men are largely obnoxious and cruel, and that the enemy of emancipation is groupthink – Stepford wives playing their part alongside feckless husbands.

Julie Bindel has suffered too much discrimination and been too immersed in the worst manifestations of male/female power relations to believe anything else. This is not everyone’s experience of course. Yours truly was a victim of coercive control from a female partner, and yes, violence at a young age – and I’ve known the prejudice and behaviour aimed at those on their own. This is not, as Julie imagines, merely the product of patriarchy threatened by female individuality. Society is unforgiving of individuality full stop. Women sometimes tyrannise men. This man has no more idea that it means to feel like a man that Julie does a woman. The problem with books like Feminism… is that the gulf between the sexes is imagined to be wide – each sex exceptional – whereas reality does not always recognise such tribal distinctions.

“What they don’t understand” is the author’s refrain of choice. She repeats it often. But what Julie doesn’t understand is that we’re people first, men and women second. When you’re looking for patterns of behaviour in groups like violent men and political activists – a narrow subset of society, that may not be apparent.

Bindel’s plea for mutual understanding and for men and women to take responsibility for improving their relationship with one another is welcome. But reading her book – at once too personal and too general to be an entirely useful piece of anthropology, I wondered if we’d better advance the struggle for utopia by recognising the gradations that exist within every social category. That’s not to ignore the differences between the sexes and their attendant struggles, or deny the existence of patriarchy – that would be a denial of reality – rather that understanding the world in gendered terms has always stifled human progress and will continue to do so until we recognise the immense overlap that exists between these imagined blocks of political and social interest.