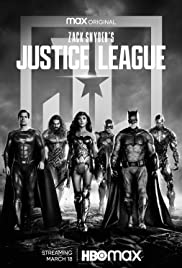 NB: This is the full copy of a 2017 review that was extensively edited and reworked.

I write this review in a state of confusion. Perhaps I should explain. The last release in the DCEU – Wonder Woman 1984, proved a superhero movie too far for your favourite critic (I’m still talking about me). I did not survive it. There was something about its aimlessness, its anaemic action and boilerplate plot, that finished me. I dropped to my knees and let out a cry of anguish that radiated throughout the movie world and was heard in all the major territories, turning heads and killing erections. Then, a funereal silence. Death. The End.

Yet there was a movie on the horizon that needed a full and aggressive critical response. Despite the best efforts of rival outlets and distinguished scribes, like the Sun’s Johnny Bollocks, and the Telegraph’s Robbie Colonoscopy, the Film Critic’s Guild – the industry body that governs the entire world – decided that the planet’s remaining hacks could not review it alone. A threat to the critical faculty like Zack Snyder’s Justice League, a movie long foretold in hieroglyphs in the ancient antechambers of the National Film Theatre, would require a team effort, led by the head cock, the discerner-in-chief, the old scrutineer. But no one knew who that was so the decision was taken to revive me instead.

I was taken to the Guild’s HQ in Burbank, California, and my fetid corpse was lowered into a special plasma – goop synthesised from Pauline Kael’s eggs and Roger Ebert’s full-fat man milk. Then, in the presence of a nervy Anthony Lane from the New Yorker, a toaster was dropped into the energising fluid. A moment later, yours truly, once again alive and unwell, was wheelchaired to a screening room. Four long hours later, my weak body was pushed up against a desk outfitted with a laptop and a magnum of Lucozade. I was still alive, despite Zack Snyder’s best efforts – and it was time to put aside any feelings of rage and discombobulation, and record my impressions while I still could.

If you’re interested enough to read this review, you know the backstory of the ill-fated 2017 release of Justice League and don’t require a refresher here. Though nothing can redeem Joss Whedon’s retooled, truncated theatrical release – as poor as filmmaking by committee gets – watching the film Zack Snyder would have put in front of audiences shows us the formidable problem Whedon faced when mandated to deliver a two hour cut. Thanks to Snyder and Warners’ mishandling of the DCEU in the preceding movies, the footage shot had been designed for a film twice that length.

Yes, we can scoff (and we did) at the bare bones introduction of new characters like the Flash and Cyborg in the theatrical version, and how hollow and one-dimensional they seemed, but now we know that Justice League, as scripted by Snyder and screenwriter Chris Terrio, spent two hours getting the band together, sketching in the new heroes’ backstories.

Consequently, we understand the dilemma Whedon faced. With just a couple of hours to tell the entire story, what else could the bullying usurper do, but slash the first act to shreds? The strategic decision to rush the DC team up, rather than follow the MCU playbook and introduce each member in a standalone film, had finally caught up with the filmmakers.

Snyder’s restored narrative has time to set up Aquaman’s paternal problems and Cyborg’s troubled history as a quarterback and “genius” (though we’re never shown his intellect in deed or dialogue – a misstep for a visual storyteller as bold as Snyder), who gets robocoped. Consequently, the first two hours is the most engaging as it’s novel and character building – or as character building as a Zack Snyder film gets, which is not much given his skim a stone on the surface of a pond approach. But this frontloading is Warners’ impatience manifest. It killed the theatrical cut and it necessitates Snyder’s becoming bloated and unwieldly.

So Snyder’s movie initially benefits from all the new money paid out for old rope. But once we’re half way through, having sat for the duration of an average movie just to see the team assembled (though still sans Superman), lethargy starts to seep in and take hold. Why? Well, it’s the same old turgid story from 2017, albeit with the exposition supporting the maguffins – sorry, the mythology, reinserted. Watching the League fight Steppenwolf was numbing the first time around and little’s changed but at least we now know why he’s here and what he wants. Superman, the head of the League, still doesn’t feature for two thirds of the running time, and only makes his presence felt at the climax.

The action’s been regraded and rescored, and has a certain stylised majesty and brutality, but excess is draining – and two hours of excess is sapping as hell. For all the extra footage, which at least produces coherence, there’s the feeling we’ve attended this rodeo and got kicked in the head before, leading to the irresistible conclusion that the film didn’t need to be restored so much as remade; the first and most important stage in that reimagining being a new screenplay.

When a film’s four hours long and still can’t quite explain itself, something is amiss. As we head into parts 3-6, we’re confused as to why, given uber-villain Darkseid’s history with Earth and the motherboxes, he doesn’t know which planet defeated him. Maybe he’s blocked it out, given the number he’s successfully conquered, but his disgraced henchman, the aforementioned Steppenwolf (who owes his master “50,000 moons” which is some serious debt) doesn’t know either. Wouldn’t the presence of the boxes give the game away? But there’s more to Earth than its history as a rebel planet. We learn it’s also hiding something called “the anti-life equation” – a formula for, presumably, turning the universe into a Snyder-friendly nightmare tableau, populated by stray deviants like the Joker and Amber Heard.

Disappointingly, this is laying pipe for Snyder’s planned Justice League sequel, an old style invading army movie with the equation as maguffin for the now pumped Mr Seid. Is it irritating sitting through a four-hour movie only to learn it’s the setup for another one – a film we’ll likely never see? Imagine sitting through Avengers: Infinity War and not getting Endgame. Again, this in part redeems the Whedon cut; a movie that was, for all its tonal irregularity and abridgement, mercifully over when the credits rolled.

Given the “release the Snyder cut” campaign and the online adulation/shock that accompanied the announcement that it a) actually existed and b) would be finished and viewable, it’s worth reflecting that part of Whedon’s mandate was to wash Justice League of all the dour, ponderous self-seriousness that was perceived to have critically sunk both Man of Steel and its bleak follow-up, Batman v Superman, limiting their appeal.

Snyder’s, er, vision duly restored, we’re left to wonder whether a movie with a palette that’s exclusively urine, excrement and pus, really is a wonder-inducing choice. The new film isn’t just lacking colour, it lacks humour and self-awareness; a lack that Warners thought, perhaps justifiably, created a box office ceiling (not a problem when your movie’s tailored for streaming).

Still, there’s fun to be had with a movie so brimming with importance that it doesn’t know or understand how clunky it is. Snyder’s attempt to give Wonder Woman a feminist sheen, for example, produces some inadvertently hilarious moments of stilted didacticism, “I belong to no one”, only undermined by Snyder’s body fetishism.

At the end of Justice League we’re left to wander through the rubble of an abandoned DECU. The aborted storyline for what would have been the further misanthropic, po-faced adventures of Zack’s super-antiheroes, is set up, begging the question, so what now?

Through a combination of bad planning and furious back peddling, the fate of Warners’ series is confused and uncertain. No wonder Snyder’s movie talks of multiverses and time travel – they may yet need these get outs.

You can hate Snyder’s work while being grateful for its stylistic and tonal continuity, as well as the gargantuan story it’s trying to tell. Less audience friendly than the MCU, then, and plotted with greater compression and higher risk, but you can’t fault the ambition – just the auteur’s inability to build characters the way he composes shots. If the Snyder cut’s a hit, will we get the sequel? And where does that leave the rest of the re-fashioned, dayglow coloured, quipy DCEU? Quite possibly on the shelf, just as the series’ original helmsman intended. Zeus help us, we may have to go through Zack’s nightmare after all.

Perhaps the fate of the Snyder cut suggests the way forward for Warners. Assuming cinema returns, the multiplex may be the place for their simple, hearty, four quadrant superhero movies. But on HBO Max, where Snyder’s imagined audience of teenagers with mental health issues and morbid preoccupations like rotting animal carcasses and political assassinations reside, not to mention the adults they became, the studio can fund the long-form, multi-narrative bore-a-thons the “fans” crave. Hell, different delivery channels could host different universes. That would keep everyone happy, wouldn’t it? Well, until they saw the movies anyway.

Zack Snyder’s Justice League is now streaming on HBO Max in the US, and on NOW TV and Sky Cinema in the UK. Sadly, other countries are showing it too.

The Ooh Tray’s Review of the now classic original 2017 release.

Certificate: 15 for being pretentiously ratioed for obsolete TVs, Alfred referring to "Master Wayne" instead of "Master Bruce", and terrorists trying to take the world back to the stone age by bombing just four city blocks.