Book Review: This Land – The Story of a Movement by Owen Jones 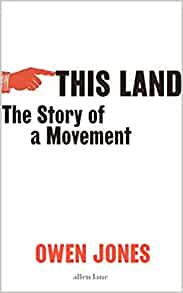 Hot on the heels of Left Out – Gabriel Pogrund and Patrick Maguire’s political autopsy of the Corbyn years, comes another hurried history from Owen Jones. A cheerleader for Corbynism, ubiquitous on TV throughout Jeremy’s accidental tenure, and one of the former Labour leader’s many media subs, given the jam making, mould breaking beard’s aversion to scrutiny and explication, Jones has a credibility problem following the 2019 Tory landslide. This Land is, perhaps, a bid for relevance – a face-saving interrogation and reassertion of battered ideals.

The tease, indeed promise of this lockdown lookback at the 2015-19 experiment, is a former acolyte taking stock in the wake of a monumental election defeat. Can Jones, as self-styled “observer and participant”, enduring his 1983 moment, divest himself of cognitive bias, reconcile the electorate’s two-time rejection of his man with his belief in the mysterious crusade known only as “the project”, and come to some sensible conclusions about what went wrong and how to proceed?

Anyone familiar with Jones, either as a panel booking or Guardian columnist, should not be surprised to learn This Land regurgitates many leftist truisms, while attempting to – and intermittently succeeding in, striking a tone that’s equivocating and reflective.

There’s no question Jeremy had the right domestic policies you understand, even if he did comprehensively fail to intuit the importance and socio-political implications of Brexit – the issue of our time. But what’s a beard to do when the project was staffed by lazy, embittered saboteurs, had no strategic underpinning, misread the mood in the now defunct Labour heartlands, and was up against a slippery and media-bolstered opposition?

Would it be improper, even rude, to suggest that maybe the leader was an issue? Jones doesn’t demur when it comes to making gentle criticism – Jeremy, “a figure of principle and conviction” was untested in a leadership role, he hated conflict, he was indecisive, he refused to “play the game” – particularly when it came to the media (and as Jones reluctantly admits, placating Jewish Leaders and Groups concerned about the party’s mixed messages and evasions on anti-Semitism).

And yet, and yet… how much easier it would have been to win, nurturing the electorate’s inner radicals and linking hands with young and disgruntled activists, if he hadn’t the twin cancerous polyps of LOTO (leader of the opposition) staffers Karie Murphy and Seamus Milne. If only Corbyn had retained the counsel and nurtured the influence of Jones’ former boss and “Labour’s lost leader” (as opposed to loss leader) John McDonnell. Sure, McDonnell had once brandished Mao’s Little Red Book in the Commons, his brain’s stylus stuck on the word “embarrassing”, but yes, if only.

One could argue that Corbyn’s perfidious and uncooperative MPs were justly aggrieved that the Jeremy-John ticket had subverted the meritocracy they professed to believe in, using parliamentary game playing to get on the ballot, then presuming to seize the leadership, despite JC himself acknowledging he was neither qualified nor enthused. “You better make sure I don’t get fucking elected,” he’s alleged to have told Momentum founder John Lansman. And that’s just the commitment to change and governance one needs when embarking on a bid to become Prime Minister – at least one assumes that was Corbyn’s ultimate objective, else imposing himself on his parliamentary party and the people in two elections was just a waste of everyone’s fucking time.

Still, despite the school caretaker being unexpectedly promoted to the position of Head Teacher, armed only with an O level in Metal Shop, Jones notes in part one of his tome – problematically framed as “Rise”, that he battled his way to a better-than-expected showing in the 2017 election. So what if, during this ascent, he’d been challenged for the leadership, experienced a near total walk out of the shadow cabinet, lost a vote of no confidence by 172-40, and, having campaigned soft for Remain in the Brexit referendum, declared – perhaps with genuine conviction, that Article 50 should be triggered within hours of the result? He’d achieved all that despite being “stymied” by entitled career parliamentarians and feckless, phone checking staffers.

Jones captures, in grabs, the abstract character of Corbyn’s leadership, but declines to bunch the threads. An aide’s quoted observing that “Jeremy comes across as quite detached from what is going on, whether it’s resilience or emotional detachment from everyday life.” When Jones deems that a virtue, tuning out the hubbub and scorn of politics, it’s a “zen-like” quality. But readers, particularly in the lengthy chapter on Brexit – which Jones piteously notes is held up by opponents as the Corbynites’ excuse for failure, not a trap he’s going to fall into even if it did create an unprecedented polarisation of the electorate which cut through Labour’s traditional coalition and which any Blarite leadership would have aggravated further with an unabashed rejection of the referendum result, will register reports that Jeremy was uninspired by the issue. But those angry with Corbyn for not campaigning for Remain with the zeal he showed in the 2017 election, dusting the result for his fingerprints, shouldn’t read much too into that.

This Land is peppered with quotes that act as clues for the reader to collect as they navigate their way through talk of a badly run party (leader, J Corbyn) and a right-wing media which defined Jeremy in absurd and unflattering terms, despite Corbyn’s commitment to either being belligerent on camera, or ignoring journalists completely. “We’re on the left, we don’t usually win things”, pipes one member of the team after Labour comprehensively lose the 2017 election. “Jeremy didn’t emotionally engage” with anti-Semitism when opponents, pointing to an implicit overlap between his anti- Zionism and characterisation of Jews, hypothesised a chink in the avowedly anti-racist campaigner’s armour.

Hints and allegations, as Paul Simon once said. But despite Jones’ insider character references and assertion that 2017 was a kind of political miracle – the kind Neil Kinnock knew as a career ending defeat, we’re left with the sense that Corbyn was the wrong man in the wrong job with a worldview antithetical to coalition building – the much mocked but occasionally successful model of triangulation.

Part II, “Fall”, at least recognises there’s a fall, but the head of the movement, though guilty of misjudgement, intransigence, and blind optimism in the face of mounting polling evidence, is the victim of institutional and sociological forces beyond his control. Murphy and Milne are the main villains, fucking up Jeremy’s response to the Russian Salisbury attack, unable to strategize, hopeless at selling their man. While the SNP (naively imagined as civic nationalists) and those old traitors, the Lib Dems, force Labour into voting for Boris’s 2019 election – despite warnings from shrewd, but hated former comrades like Tony Blair, that to do so would allow the Tory leader to fight on his terms. Corbyn’s reaction to the result and gifting the Tories a potential further decade in office? “Oh dear.”

So what went wrong? Jones sums up, having allowed Peter Mandelson to make the case for the prosecution. The conclusion is the innuendo the electorate chose poorly, despite a slew of policies that would have improved their stupid lives. They were misled, managed by Dominic Cummings, and consequently one should not infer the programme Labour put before the people in 2019 was a vote loser. Rather, it was delivered by the wrong messenger at the wrong time. Is that the same as winning the argument? As ever, history and the people will decide.