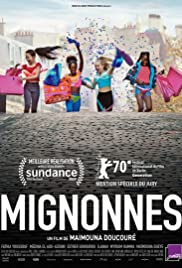 They Fuck You Up, Your Mum and Dad

Warning: The reviewer has seen this film so may articulate informed opinions in its appraisal. Those uninterested in this category of assessment shouldn’t read any further.

I don’t know about you, but I’ve missed a good old fashioned moral panic. It’s been a while since we’ve had a movie that brought out the tired, obnoxious argument that a story shouldn’t be told because it’s a threat to our values; the idea that we’re incorruptible, but weaker, more impressionable people may have their innate deviance stimulated by having society’s prurience, sadism and hypocrisy reflected back to it.

You might think such paternalism fails to understand the distinction between the subject of a story and its focus. You might also reflect that there’s not a mode of storytelling yet devised that enables you to explore difficult topics without dramatizing them. Maïmouna Doucouré, revisiting her childhood experiences, surely toyed with telling her tale using allegory, or abstract metaphor, but in the end concluded that might blunt the story’s brand of social and psychological realism.

Cuties features girls as young as 11 in hypersexualised situations. Consequently, it has been derided, for the most part by those who haven’t seen it, as indefensibly exploitative. To accept this on its face, you must believe the process of dramatization does not involve any form of critical and psychological distance from the acts and situations being portrayed, nor does it include layers of protection and care absent from the real world. If you’re such a person, I’ve got good news for you: Gaspar Noé didn’t really have Monica Bellucci raped in Irreversible. She’s okay, kids.

The cinematic apparatus, coupled with adult supervision, should be reassuring to audiences. So too the presence of a female director whose interest is not in titillation, indeed any form of lasciviousness, but the damage, trauma and anxiety to the principle character wrought from patriarchal forms of oppression. But as usual, excitable commentators, and pearl clutching prigs, bay for Doucouré’s blood – even question whether Netflix, who made the film, should be cancelled because of it.

It’s hard to believe that 120 years of cinema hasn’t cured us of this idiocy. But for those not used to the vérité brand of French cinema – who’ve never seen a Catherine Breillat movie, who – ironically given the controversy, have been infantized by Hollywood, the impetus to make the film, and, fuck me, make it available to a wide audience, must be very difficult to understand.

The movie reflects a reality – that wayward kids, conditioned by social media, and a sexualised culture, are in a hurry to grow up and get noticed. But that, as should be bleeding obvious, is symptomatic of the issue under glass; the impetus is what Doucouré’s interested in.

In Fathia Youssouf Abdillahi’s Amy, a French Senegalese Muslim, growing up a strict household, with a mother bereft at the decision of her absent husband to take a second wife, the film identifies the girl’s compulsion to rebel and seek attention as a reaction to her father’s neglect. But it’s also a conscious repudiation of his use of Islamic attitudes and practices to betray her mother, and bind all the women in her family – her, her mother, her auntie, to servitude; a subordinate status that’s accepted a little less by each succeeding generation.

As the story progresses, it’s clear that beyond the superficial liberation promised by dressing up and twerking for an audience of lewd Dads, their wives and daughters notably shocked, Amy’s really looking for a way to avoid the build up to her Dad’s forthcoming celebration of institutionalised bigamy, and everything it symbolises.

Not for nothing is Amy’s wedding dress – coded as traditional and respectable, in contrast to her skimpy dance gear, a source of great anxiety. The film expects its mature audience to note the contrast between two distorted forms of female sexuality – the uncomfortable glitz and premature sexualising of girls in the world of the online-driven dance troupe; the pornification of childhood; and the regressive Islamic alternative, that tells Amy she’s a woman the moment she starts to menstruate, and that having become one, her only role in life to obey her future husband and cook his meals. Curiously, not a single one of the movie’s detractors is angry about that.

Ultimately, Cuties, though undoubtedly uncomfortable viewing in grabs, is a sincere and heartfelt plea for a moderate form of childhood – one in which young girls are free to express and know themselves without the burden of extreme forms of male expectation, whether that beast shows itself as a monster or is camouflaged in pre-modern righteousness.

Those who say the film shouldn’t exist or Netflix are at fault for making it available to a global audience, have to answer the question: if you think there’s a shortage of black, female experience on film, is it a good idea to become censorious when it arrives? The audience may have some growing up to do.