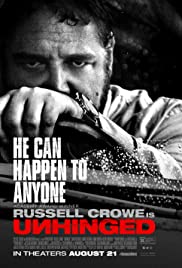 It's all over the front page...

Unhinged is an appropriate title for a movie that’s trying to persuade those fleeing the zombie apocalypse to take a trip to the mall. In peacetime, Derrick Borte’s road rage thriller would be spring filler – the kind of movie you slip into to get out of the rain. But for a few weeks it was the only show in town – an unshoed nag with two broken legs that improbably became the star attraction on derby day.

The setup’s pure schlock. Caren Pistorius is a hairdresser with a home client list, who loses a customer when her morning school run is arrested by heavy traffic. Mother and son subsequently encounter the hulking, bloated, masculine mass of Russell Crowe, who takes exception to her impatient beeping. Pistorius doesn’t know what we know, namely that Crowe has already broken into a house and bludgeoned its occupants to death with a hammer, presumably the last word in a similar altercation. Thus our heroine becomes the target of his righteous anger, fuelled in-part by prescription drugs and mental disturbance. He steals her phone, stalks her family, and subjects them to frenzied violence, and in all in the space of an afternoon.

Borte’s movie doesn’t have the simplicity or the tension of Spielberg’s Duel, its ancestral forebear. Instead, it’s a flick built around Crowe’s extra-large performance; a turn so gleefully wide-eyed and brutish, that all other considerations, namely intellectual coherence and social commentary, fall by the way side.

This is less carefully plotted thriller, more stalk and slash movie, with Crowe’s bulked bastard (complete with stick on beard) shot to look a third larger than any other cast member. Is he unhinged? Absolutely. Untroubled by the need to add a dimension to his performance that might lend weight to his troubled view of society? Yes sir.

Caren Pistorius does her best as the protective mother battling to stay on the front foot, but this is Crowe’s show, and as he’s not taking it seriously, there’s very little reason for us to. Had Borte invested the movie with a little style, and given it a proper psychological underpinning, it could have been a solid thriller. As it is, Unhinged is a ripped-from-the-headlines potboiler, half-heartedly wagging its finger (if it had a finger) at our metropolitan antisocial tendencies, that will do little to convince those who see it that it’s worth the risk to their health in a time of Covid.