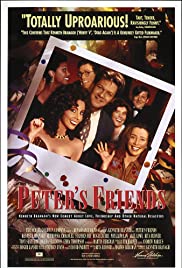 I first saw Peter’s Friends in 1992. Then 15, I recall leaving the cinema feeling warm and cheerful, the film having done its simple work on my adolescent brain. For the next 28 years it was never thought of again, until a discerning friend suggested it was a go-to bad movie, an insufferable trudge. This wasn’t my memory of Kenneth Branagh’s pay day for his University pals. Could that first impression have been so wrong?

As it’s about nostalgia, the film seemed ripe for reappraisal. Peter’s Friends are Cambridge graduates, members of something like footlights, who reconvene at the gang leader’s country pile ten years on. Ostensibly, the death of Peter’s father – Peter a pseudonym for Stephen Fry, is the trigger for a New Year’s party; a three day recall for his bosom buds, though we later learn he’s not into either of those, to see in the unimaginable future of 1993.

The movie’s climatic revelation is that the real impetus was to break the devastating news that Peter’s tested HIV positive. He’s known for six months, but he thought a belated Christmas and New Year gathering was the right moment to saddle his titular mates with this crushing news. One can understand his timing, as the cathartic final scene, in which tensions and resentments boil over, is also a moment to reflect that in reassembling his old troupe, he’s inadvertently forced them to appraise their lives, and confront the fact they’re miserable, unfulfilled, and broken. Just the moment to pass around your death sentence, then. Feel the parchment, admire the calligraphy.

What do we learn about Peter’s Friends in the three days before this sledgehammer to their individual and collective self-absorption? Well, chiefly that the group represent, depending on your point of view, a set of flawed but terribly civilised English upper-middle class bright young things, or an estate (the correct collective noun) of privileged wankers who can’t quite handle adult life. We’re invited to laugh and sympathise with them, for their relationship struggles and frustrated ambitions invite pathos, but the movie assumes the characters values are our values, and the resulting mismatch generates an altogether different kind of tension.

There’s no rule that characters should be likeable of course, but are we really supposed to feel sorry for Peter, whom we’re told has never held a job or had a proper relationship, when he’s a rich landowner with a live-in maid and groundskeeper, said maid drinking alone while the friends eat the food she’s prepared in the next room?

Andrew (Kenneth Branagh) is a former alcoholic and miserable multi-millionaire, whose wife – California cliché queen Carol (screenwriter Rita Rudner sending up her own culture) is present to underscore how vulgar she is, and how refined and educated the gang are by comparison. Carol even has to suffer the indignity of being given a book to read for bed when she learns Peter has no television. Poor poppet.

Sarah (Alphonsia Emmanuel) is a sex crazed homewrecker. Her boyfriend, Brian (Tony Slattery) is there to be loud and obnoxious, again inviting us to appreciate the gang’s more delicate sensibilities. Having duped him into leaving his wife and child, Sarah promptly dumps the pliable idiot, and he’s dispatched into the cold on New Year’s Eve. A drunk Andrew, miserable at the departure of his wife (it’s necessary to clear the decks of all sub-optimal partners so the friends can be alone at the close), describes the witless former fuck as “human excrement”.

Not all the characters are pricks but those that remain are either too twee or too mannered to enjoy. There’s sweet, lonely Maggie (Emma Thompson) who, despite having not seen Peter for years, decides he’s her perfect mate. It isn’t clear how you can go to University with someone and not know they’re gay or bisexual, but none of Peter’s Friends definitively have a handle on his sexuality. The film holds this back, first for comic effect, so Peter can clutch pearls when faced with Maggie’s clumsy sexual advances, then as a means to foreshadow that final confession – the sucker punch of Peter’s HIV. Is it sound to use the diagnosis, then terminal, for such crude emotional manipulation? Might it not have been better for Peter to have been upfront, told his pals, and used this reminder of mortality to induce the reflection that in the movie-as-made occurs by happenstance?

But this is also a flick is which cot death is a spur for some frightful sadness. Roger and Mary (Hugh Laurie and Imelda Staunton) have lost one half of their twins, and both are struggling. Mary can’t relax away from home and Roger can’t comfort his wife. Ultimately, they talk and fuck and come to terms with their grief. Child death is important, you see, but it’s also an inconvenience when your third act pivots on the title character breaking bad news.

Sure, Peter’s Friends has a certain verisimilitude in the way it depicts repressed middle class manners and how these are overlaid upon psychological problems in friendship groups. Everyone’s been to a reunion where your friends introduce you to their obnoxious partners, and everyone knows the arguments spill out in public and continue privately after dark. But in this film it plays out in bland and reserved fashion. You wouldn’t stay with Peter’s Friends, you’d leave with Brian. Being in an environment this buttoned up is suffocating.

Ultimately, what felt sincere and reassuring in 1992, seems indulgent and stilted today. Even the soundtrack – a slew of poptastic ‘80’s hits, songs we infer the gang listened to as students, when their tasteful enemies were enjoying The Fall, Joy Division, and the like, signal their characters’ middle-of-the-road sensibility. Peter’s Friends are bores, so perhaps it’s just as well we weren’t there when they met in 2002 to work through their mid-life crises.