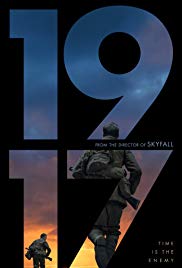 Sam Mendes’ walk through World War One milieus plays like a series of anecdotes because it is; those of his ancestor says the closing caption. It’s a ticking clock story with a storytelling gimmick – the fabled one-shot movie, which aside from Aleksandr Sokurov’s Russian Ark, is oft-promised but seldom delivered.

Technology hindered Hitchcock’s attempt with Rope, and the transition between interior and exterior environments, each with their own lighting requirements, defeats Mendes and photographer Roger Deakins, here. Precision, computer-assisted cuts support the illusion, but all cinematic narrative’s an illusion so why worry?

The real-time aspect, though it’s necessarily broken mid-movie to accommodate a period of unconsciousness, adds to Mendes’ war movie in the sense that it recreates something of the experience of wandering through the hellish backdrop the war has created.

You’re struck by the details; the rotting horses, the rat that jumps from a cavity in a cadaver – a hole George MacKay stumbles and sinks his hand into, the sodden landscapes, the mud, the gutted architecture; visions of the conflict that have time to percolate into the consciousness as they’re experienced in-situ.

The story, that amounts to two soldiers trekking through noman’s land to warn a cut off battalion about their imminent entrapment and slaughter, matters less than the whistle-stop tour of war-time memories. Ultimately it amounts to a “fuck off” from the officer class and a trembling handshake from the dwindling relatives left behind, but the intervening heroism is vivid and undeniable.

“It doesn’t do to dwell on it”, one officer says to MacKay, reflecting on the death of friends, and you might apply the same dictum to 1917 itself. What more is there to be said about a conflict that’s been so well-documented? On this evidence, not much. But as an act of commemoration, narrative gimmicks aside, it’s as tragic and gently moving as any tribute to wasted lives could be.

As a piece of filmmaking it’s dynamic, as an act of remembrance – respectful. Mendes’ script has enough dramatic ironies to stimulate reflection. His direction is matter-of-fact and therefore uncontroversial. What a bolder, more anthropological filmmaker would have made of the same conceit I don’t know, but Mendes efforts, in keeping with his back catalogue, will have broad appeal and a long afterlife on Sunday afternoon TV, subject to the odd trim for language.

Certificate: 15 for the gap between trenches being just 15 minutes, terrorist rats, and ungrateful hun.