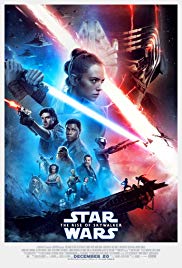 The alternative history of Star Wars at Disney goes something like this; J.J. Abrams is hired to direct the first in the sequel trilogy without having a single idea who or what it’s about. The story was wrapped up in 1983. There’s Extended Universe material to fall back on but Uncle Walt’s execs don’t read books and comics and they don’t want their filmmakers doing so either as they like to retain full creative control from inception to final cut.

Walt, who’s been kept alive in a subterranean temple, preserved by non-defined means, demands a safety-first legacy sequel; a disguised reboot that will expunge all memories of the unloved prequels. Abrams, a high-end hack, is only too happy to oblige. He riffs on the 1977 movie without shame or apology. Fans, starved of thrills since Return of the Jedi, lap it up.

Abrams, lead to believe he’ll only be responsible for the first act, sets up some lazy plot threads which he anticipates his successors will flesh out. However, Disney, in a rare moment of daring, hire Rian Johnson to write and direct the middle-chapter. Johnson fancies himself as an auteur and quietly despairs at how derivative and corporate The Force Awakens is. He also resents Abrams’ attempt at boxing him in – having the audacity to hand off the story like a game of fucking consequences, creating equally uninspiring expectations that a less confident filmmakers would feel obliged to pay off.

Instead, Johnson, to Abrams’ horror, cauterises all those plots and creates a largely self-contained sequel that consciously and deliberately robs the trilogy’s third director of an obvious conclusion patterned on Return of the Jedi. Rey is not trained by Luke, Luke dies at the end, Palpatine substitute Snoke dies leaving Ren in charge, Rey’s parents are nobodies. Abrams, now re-appointed to make the conclusion, following the panic sacking of Colin Trevorrow, has nowhere to go and no idea what to do. Johnson’s aggressive repudiation of his storytelling instincts, such as they are, does motivate him, however. He’ll show Johnson whose trilogy this is; he’ll take back control.

Rise of Skywalker is what happens when the duelling egos of incompatible storytellers are vested on an unsuspecting audience. It represents a cataclysmic failure of imagination; a piece of corporate product, patched together from plagiarised elements and the half-baked ideas binding them together.

Abrams’s agenda is clear; to obnoxiously strip out and reverse all Johnson’s creative choices, not least his unforgivable attempt at democratising the series’ mythology and challenging some of its basic assumptions. Disney’s company man is at it with great tenacity from the opening scene, reintroducing dead villain Palpatine so he can reopen the question of Rey’s parentage and restore his opportunity to rework Return of the Jedi’s climax. He has no story of course, so instead sets in train a series of MacGuffin quests designed to reunite Daisy Ridley’s one-dimensional hero with the inexplicably resurrected baddie. This is a clothesline on which to hang a series of familiar dog fights and saber duels, culminating in the now de rigueur assembling of the rebel fleet to attack the Empire/First Order’s stronghold – in this case a murder of Star Destroyers, built in secret, each carrying Death Star-level destructive power. Effectively another Death Star.

Along the way Force Ghost Luke denounces his conduct in Episode VIII and mysteriously converts to the idea of restoring the Jedi order, a group he once recognised as an unaccountable elite, whose millennia long battle for control of the force led to perpetual war. Johnson’s character Rose Tico is side-lined and forgotten, and the emphasis on exceptional blood lines is restored. Not for Abrams the temptation to explore The Last Jedi’s promise of force sensitive folk sprawled throughout the galaxy. Instead, John Boyega’s character suddenly develops a hitherto unplotted force connection with Rey, implying he too is special. If only the characterisation supported this idea.

Movie trilogies can be retrospectively joined-up of course; the original three Star Wars movies were not meticulously pre-planned. The notion they were, and the idea the prequels were fully developed and on the shelf for decades, was itself a retcon. But it’s hard to remember a movie in this or any other series when the backpaddling and attempts at creating a coherent narrative from incoherent thinking were so conspicuous.

Rise of Skywalker asks us to accept that Palpatine, a character whose death symbolically closed Anakin Skywalker’s arc, and whose rebirth renders that struggle, like all others in the original trilogy, largely irrelevant, has been resurrected via a nebulous conflation of mysticism and technology. His plan? To withhold the creation of a new fleet while the remnants of his Empire regrouped elsewhere and fought independently to restore fascist hegemony under the rule of a proxy he created in a lab, when he simply could have commanded them himself. Why did he not put the matter beyond doubt and lend his creature Snoke, then Ren, ships with planet destroying capabilities as they became available? Because the story had not yet been conceived.

Episode IX is full of these question marks. Luke and Leia apparently always knew Rey was Palpatine’s granddaughter and that the old monster had enjoyed a sexual relationship, but chose not to tell her. Instead they wait until one of them is dead and the other’s frail, forcing her to face the family threat alone. It doesn’t even occur to them to tip her off when Palpatine resurfaces, and this despite her force abilities potentially providing a back channel to the man who now threatens the free galaxy.

Ben Solo is improbably redeemed, with a couple of gentle prompts from his parents – one dead, one dying, and a minor act of kindness, all it took to facilitate a fan-pleasing conclusion in which this genocidal cultist gets to enjoy a moment of love and catharsis before his dies. Don’t complain it’s unearned or patterned on Anakin’s story, you demanded it; you told Rian Johnson he was a vandal for daring to think like a storyteller.

Rise of Skywalker is a hollow and soulless experience then; a movie with all the integrity of a fan fic short story. The beats are predictable but the choppy execution and desperation to appeal to YouTube critics is surprising. Who’d have thought the filmmakers had so little confidence in their audience? Who’d have imagined the finished film – if it is finished, would mirror the creative lethargy underpinning it so perfectly? It’s slapped together, half-hearted, cynical and tired.

The fear, as this trilogy unspooled, was that it had no clear direction, no impetus of its own. It’s played like a nostalgia project gone wrong; a misshapen monument to three classic sci-fi fantasy films. Abrams will come to be embarrassed no doubt. Johnson will say he told you so. Then there’s George Lucas himself – the man who failed to understand the appeal of his own creation, making the prequels that would one day lead to the timidity informing the sequel trilogy. Poor Star Wars – a tale told in three instalments, later fucked from both ends by its father and kids. Perhaps the next trilogy should take that metaphor as a starting point – see what develops.

Certificate: 12A for integrating a dead woman into a movie with digital trickery but failing to show a host of living actors who might have had a cameo, Force Ghost Luke proudly holding his lightsaber aloft, and a bewildered Billy Dee Williams.