Film Review: Jumanji – The Next Level 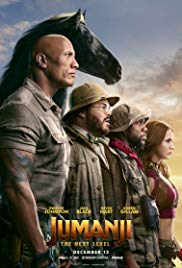 Jumanji: The Next Level is next level breezy. Its jokes, characters and setups are so light-touch they barely register. It’s like watching an insect gently walk across the surface of a pond. After the billion dollar success of Welcome to the Jungle; a nifty reboot that used its stars-as-avatars premise to rekindle the spirit of the 1995 movie without remaking it, Sony have taken zero risks with the hastily greenlit follow-up.

It’s the cast and premise fans of Jumanji 2.0 know, with variations. Enjoy Kevin Hart playing a crusty, septuagenarian Danny Glover. Lip curl as The Rock tries his hand at Danny DeVito’s schtick. Shift uneasily as Jack Black tries his hand at a black teenager. Ogle Karen Gillan. And all the while appreciate the effortless interplay between the leads who can’t quite believe they’re back doing this shit, or indeed how easy a payday it is.

There’s a new in-game backstory, allowing for some fresh environments to gladden the eye, while the brain takes a back seat, as it would if you watching someone else play a video game. But, lest we think this is simply a perfunctory exercise in blockbuster filmmaking, there’s the faintest impression of character complications to resolve; the breakdown in the relationship of two real world teens whose names no one can remember, and an old feud between the geriatrics given a new lease of life in their computer generated bodies. Occasionally the movie stops to address these sentimental beats before resuming its main business.

Jake Kasdan’s adventure has something like humour too, which in a sop to the target audience of undemanding teenagers, is centred on breasts and testicles. Some additional gags, around amusing ways for game characters to die, pad out the running time, though in keeping with the creative timidity on display throughout, these are never as inventive or elaborate as they could be.

Ultimately, The Next Level is a perfectly bland but colourful slab of corporate product that begins to fade the moment it ends because those involved forgot to add any identifying marks; there’s no style and no wit. You can’t dislike it because there’s nothing you can hold onto long enough to be offended by. A mid-credits stinger suggests a third sequel that will bring the franchise full-circle and bring the world of the game back to our humble reality. That smell you can detect is panic, as the writers attempt to contrive a way to bring the new star cast along for the ride. Without them, this series is about as involving as a broken games console.

Certificate: 12A for a joke about a horse's genitals, Jack Black's teenage girl impression, and Mandrills.