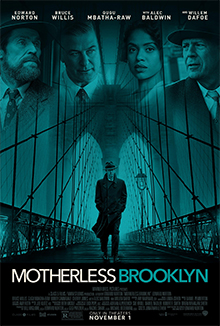 It’s not often that a genre movie makes you think of a book on urban planning, but Ed Norton’s thoughtful and eloquently realised fifties-set Noir does just that. Like another neo-iteration of the great American crime genre, Chinatown, it’s a personal mystery with small-time players, that acts as a front for a larger conspiracy with city-spanning implications. Jane Jacobs classic text, The Death and Life of Great American Cities, on the folly of architectural modernism; an orthodoxy so pre-occupied with form and layout that it fundamentally misunderstood the importance of community, is echoed in Motherless Brooklyn’s grand scheme – an attempt to turn black neighbourhoods into slums so they can be demolished to make way for new developments for the affluent and anomic white population.

What gives Norton’s move an edge, making it substance peppered with style, rather than the parody-hugging converse, is the manner in which the makeup of characters bleeds into plot. The screenwriter/director’s Tourette’s afflicted snoop goes on the hunt for the heavies that shot his friend and mentor (a brief Bruce Willis), only to uncover a story, that like the best of them, pits the corrupt and powerful against the poor and dispossessed.

It was clever of Norton to repurpose Jonathan Lethem’s 1999 novel, relocating the action to the 1950s, because it adds a layer of poignancy and inevitably to the conspiracy under glass. We know what’s going to happen to these New York neighbourhoods in the name of progress; we know what awaits the little guy. You haven’t felt this angry about an urban renewal project since those LA trams were mothballed so they could build a freeway through Toon Town.

When Norton finally confronts the biblically named Moses Randolph (a version of real-life urban vandal, Robert Moses), played by Alec Baldwin as a bastard with a God Complex, he realises (in the short term at least) he cares more about the life of Randolph’s illegitimate mixed-race daughter than protecting New York’s urban communities. We realise that Baldwin’s targeting of those neighbourhoods is a twisted form of psychological projection; the literal erasure of black New Yorkers from the sprawl to expunge an historic act of racially-aggravated rape. It’s a scene defined by hardboiled pragmatism and moral compromise; the hallmarks of the genre revitalised by intelligent, adult storytelling.

Were Motherless Brooklyn a ‘70’s movie, it would be probably be in line for some Oscars – a neo-noir with brains and social commentary to boot. Instead, despite its classic genre trappings, mature storytelling values, and deft performances, not to mention an evocative light jazz score from Daniel Pemberton, it’s been largely ignored by audiences. Perhaps it will be rediscovered on streaming, or lost, like those so-called slums. In any event, whether it’s the film’s period setting or the fact it’s a great movie aimed at adults playing in a cinema near you, Norton’s film is an act of nostalgia to savour.

Certificate: 15 for a quasi-deranged Willem Defoe, casual racism toward an earnest ginger jazz fan, and failing to pay a cab driver.