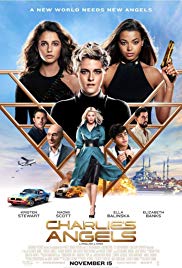 Throw Ya Hands Up With Meh

The brain trust behind this reboot of Charlie’s Angels have identified a new strata of the cinema going audience. This is not an inconsiderable achievement and it deserves to be noted on the record. In 1975 Steven Spielberg stumbled onto a teenage audience for high concept entertainment hitherto untapped, but this was a happy accident. Elizabeth Banks has created a film for a tranche of the cineaste that most of us didn’t know existed. I refer to the action averse, misandrist woman who only feels comfortable around gay men or other singletons. It’s brave of Banks to reach out to these people; braver still to accept them for the hate-filled sexists they are.

In the old days women who built their concepts of men from clichés and imagined the ones they bumped up against daily as inferior to the archetypal conceptions in their adolescent brains, might have been embarrassed to signal that view in public. But in 2019 it’s not only acceptable, it’s considered a just corrective for the converse centuries-old idiocy vested on women by men in positions of power and influence. Banks’ movie reassures ladies of a certain bent – unknown to the filmmakers personally, but vividly imagined, that suitable cinematic proxies for them can be found and better yet, a world can exist where anyone with a penis is perfidious, arrogant, psychotic, vacant or dead.

Charlie’s Angels aren’t mentored or even employed by men – the old Charlie’s dead and now a woman speaking through voice-altering software for the purposes of signature element continuity. The girls are in charge and not afraid to be vulnerable and silly. You can afford to be when you have the integrity, intelligence, nous, and physical agility men lack. Some so-called progressives will argue that reversing the power dynamic in this way is an idiot’s conception of equality, but perhaps they’re just men intimidated by a film that exposes the truth that they’re just a front for female power and industry – an illusion that’s swiftly dealt with when they try to flex their imaginary muscles.

What next? The cock and ball brigade arguing that all Banks has done is appropriate, without style or skill, masculine forms of storytelling, conferring the tropes – risk taking, combat, sexual aggression, and technical savvy, to female characters? They’ll try it no doubt – going even further to suggest that Charlie’s Angels insults and patronises the built-in audience for this mediocre IP, i.e. men, without having any idea what a woman would want to see instead, assuming she’d be interested at all. Yes, those arguments will be made, but man-hating airheads have their own movie now and the colossal box office that’s sure to result will silence any doubters.

Certificate: 12A for men getting repeatedly kicked in the balls, the casual murder of an innocent man, and frenzied editing to hide piss-poor direction.