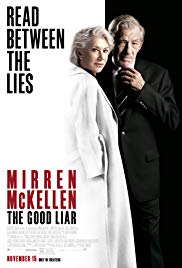 The Good Liar, though not billed as such to avoid a huge third act spoiler, is a revenge thriller with the kind of backstory that has the imprimatur of an airport lounge novel. It’s the kind of tricksy, twisty story which, given the apparent one-sidedness of its plot – a crusty, cynical Ian McKellen scouts the internet for a victim for his established investment scam, while indulging in a little geriatric gangsterism on the side, moving in with the unwitting widow who takes the bait – immediately sets you up to anticipate a rug pull.

Indeed, the more we see of McKellen’s manipulative and murderous world, and the less of Helen Mirren’s passive but pleasant former history academic, her suspicious nephew, a PhD student researching Nazism, ready with questions for his wannabe step-uncle like “what did you do during the war?”, the more we ready ourselves for a switcheroo.

Given an assertive Mirren is inevitable, Bill Condon does a good job of keeping the wolf from the door for as long as the story will allow. Long before he’s tipped us off in those final twenty minutes – Mirren’s composure a little too studied, her glances a fraction too long – he’s laid the ground with enough hints and tips to set up McKellen’s true identity, while withholding the critical pieces of information that finally bring the story into sharp focus.

That initial lack of focus might have been a problem; after all, for much of its running time, The Good Liar’s in no hurry to reach its destination. But McKellen’s switches from gentleman with impeccable manners to expletive dropping sociopath, are so natural and so delicious, that we’re content to wait it out. As the threat to Mirren is nebulous at best, the possibility that she’s endangered by her association with McKellen settled early, there’s little tension, but plenty of intrigue, and the conclusion – though contrived, as only a grifter plot can be, is immensely satisfying.

Condon’s direction is character focused and careful, rather than stylised, which makes The Good Liar a good story that won’t lose much when transferred to streaming services. However, it’s worth seeking out for McKellen’s performance alone, even if the story’s architecture minimises Mirren’s contribution.

Might a retooling of Nicholas Searle’s source novel have allowed Mirren to get involved earlier? Possibly, but the movie-as-made is McKellen’s show, and a very enjoyable one it is too. Good liar, good movie.

Certificate: 15 for a man heading straight from a date to Stringfellows, retrospectively covering up a character's lack of grifting discipline with a line about being overly emotional, and Boris buses being ubiquitous just one year after he became mayor.