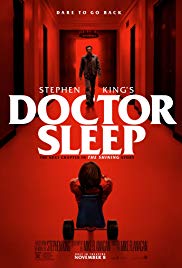 Given Stephen King’s propensity for catching up with adult versions of his child characters, it was perhaps inevitable that he’d pen a sequel to The Shining. But he may have had an ulterior motive. It can’t be easy writing a personal story like that of Jack Torrance – a writer burdened with King’s struggle with alcoholism, only to see Stanley Kubrick strip out that character flaw and replace it with a disposition toward madness. Worse, so vivid was Kubrick’s treatment, so indelible its imagery, score and that unhinged Jack Nicholson performance, that memories of King’s original novel were duly expunged. Thus Doctor Sleep can be read as the horror novelist’s attempt at renewing ownership over his story by extending it. But Kubrick’s film won’t go away and thus the film adaptation of the sequel novel is something of a creative compromise.

King loathed Kubrick’s refocusing of his story, but he’s pragmatic enough to know that any movie sequel that didn’t lean heavily on the aforementioned horror touchstone would be resoundingly rejected by audiences. That means Doctor Sleep effectively writes and directs itself.

It must, in keeping with its predecessor, be a slow-burning, eerily quiet, coldly delivered, inhuman story that culminates in a visit to the Overlook Hotel, and the digging up of that classic iconography. The score must be linking, even parodic. Mike Flanagan, who directed an adaptation of Gerald’s Game for Netflix, knows it is part-continuation, part-homage. He doesn’t deviate from the culturally dictated template one iota.

When Doctor Sleep’s telling its own story, it’s an involving and unsettling disquisition on childhood trauma, predatory adults and a man, Danny Torrance, struggling with his own vices. Prime King territory then, delivered with some style and the occasional flash of menace.

It’s only when Torrance, with Kyliegh Curran in tow, as the young Shiner coveted by Rebecca Ferguson’s essence sucking villainess and her gang, heads for Colorado and film history, does the film resemble Kubrick fan fiction; a third act that’s referential without being unduly derivative, that nevertheless lacks an impetus of its own. A fact that must be genuinely galling to King, who finds his sequel, with references to Jack Torrance’s alcoholism duly restored, obscured by the 1980 film’s long shadow.

This might have mattered less if Doctor Sleep had a central performance to match the weight, threat, and incremental dread of Jack Nicholson’s. Instead, the film’s lumbered with a passive and vanilla turn from Ewan McGregor. Perhaps Flanagan wanted to contrast the disturbed Dad with the controlled son, but the result is to strip out the one element that, though begrudged by King, powered both his novel and Kubrick’s film – the threat to a child from an adult wrestling with powers beyond his control.

McGregor’s a subdued and paternal presence in the movie, and consequently, with Ferguson’s gang often a distance presence, the film has very little tension and nostalgia where its spine should be.

Did memories of Kubrick’s treatment compel King to veto any changes to his novel that might have made for a more psychological engaging on-screen treatment? On this evidence, yes. The irony being that a dead filmmaker has managed to linger and control the living from the grave. On the other hand, King’s next novel just wrote itself.

Certificate: 15 for great cat acting, lookalikes, and a Kubrickian hangover.