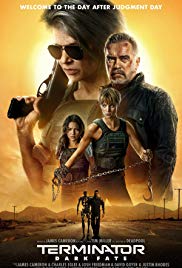 Rage Against The Machine

Warning: This review alludes to the dark fate of some characters.

When audiences first identified with Sarah Connor, the heroine of James Cameron’s 1984 Tech Noir, little could they have dreamed they would share the character’s dark fate. Like her, no matter what they do – whether they run from the future shocks offered or take them head on – they’re doomed to deal with new Terminators, perhaps until they are dead. The filmmakers can’t be bargained with; they can’t be reasoned with; they don’t feel pity, or compassion, or remorse. Their mission is to maintain the franchise’s future utilising mechanical sequels.

Like the characters in Dark Fate, we’re so resigned to this grinding repetition that we don’t even bother to ask why it’s happening or how we can stop it. Those essential and pertinent questions are reserved for sequels of course; it’s all deferred pleasure and logic in the world of disguised remakes/reboots; and this despite the presence of legacy characters who’d want to know, because they’re old, tired and don’t want to go through all this shit again.

Dark Fate is a tacit acknowledgement that after some sincere but misguided/ill-conceived attempts at sequelising James Cameron’s classic twosome, there’s no new ideas and nothing left to do but remake the series under the guise of continuing the original story. So like The Force Awakens, the story is repeated with legacy characters included to foster the illusion this is a continuation, not an overwrite, of those cherished forerunners.

The requirement to acknowledge and incorporate those old flicks adds a layer of storytelling complication, of course. One has to explain why Sarah Connor’s still a mercenary and how she’s involved in someone else’s mission to safeguard the new saviour of the future (the old expediently removed in the opening scene, annulling T2). Arnie’s appearance as a geriatric T-800 living in a Texan wood cabin adorned with family photos, also has to be given a credible backstory. If not, the simple tale being told in parallel might collapse under the weight of these studio imposed bolt-ons.

Dark Fate’s answers to these questions – some horsehit about time travel sensitivity, a remarkably prescient Terminator that for no reason grew a conscience and felt compelled to help one of its victims, without checking whether a life of hunting killer robots is what a grieving mother wanted, are terrible and senseless. Does it matter? Well, Deadpool director Tim Miller waves you on, keeping the movie pacey and noisy, hoping you won’t think too hard. A pity, as when James Cameron was making these flicks instead of producing them at distance, apparently indifferent to the results, thinking was both encouraged and rewarded.

It’s a pity that Miller and his team of writers (Cameron is credited but surely only contributed the original plot), didn’t have the nous or interest to add psychological depth within the carefully laid tramlines of the boilerplate plot. Imagine a John Connor that had lived and was now middle-aged and redundant, perhaps envious of Natalia Reyes’ Dani and her importance; consider a Sarah Connor that had changed the future only to see a 40-something Kyle Reese appear, in love with his new ward; ponder an augmented Grace – the genderfluid Mackenzie Davis – wrestling with her loyalties as she considered both the virtues of humanity and the advantages of being a machine. These might be scenarios that added tension or intrigue to the first two films’ familiar dynamic, but instead we’re given more of the same – only less so in the case of a one-note Reyes and Davis, plus a new Terminator, who like the model in the original Terminator 3, is curiously less efficient than the model that preceded it (why if you’ve invented a liquid metal killer would you re-add a solid metal endoskeleton?).

Dark Fate’s a perfectly watchable sequel to the first two Terminators, but in Tim Miller’s hands it feels like a superficial re-tread. There’s more grit than recent entries but none of the cold logic, meticulous staging or savage intensity that Cameron brought to his cool pair of merciless actioners. Miller rushes his first act, hurries his setpieces, and scrubs the material of its underlying intelligence. What’s left? The story you know retold for those without patience or personality; a Terminator movie produced by machine learning. It’s time to take that next script, that will inevitably remake Terminator 2 badly, and throw it into the steel. Only then can we face the future with hope.

Certificate: 15 for conspicuous sexual politics, no internal logic, and a killer android that grows a conscience and wants to start a family.