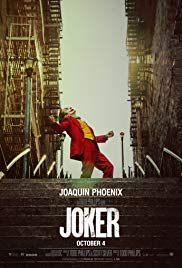 Here’s a philosophical question for you. Pay attention, because it’s very difficult. Is Joker a real movie masquerading as a comic book flick – the “real” part alluding to an old standard, namely human interest and psychological intrigue over spectacle and effects? Or, contrary to the thing imagined by director Todd Phillips when pitching to method actor Joaquin Phoenix, is it the opposite – a franchise movie masquerading as a real film?

Before you decide, consider that it’s triggered a few old fashioned conversations – huge anticipation for a grounded character study, and a full-scale moral panic of the kind depicted on-screen; a form of meta-marketing you might think, that’s positioned Joker as something movies aren’t supposed to be anymore, on account of their infantilism and whimsy: dangerous.

On viewing, it’s hard not to read two layers of pastiche. There’s the film itself, natch, complete with its period Warner Bros. logo and grimy New York (standing in for Gotham) locations. Not for nothing is Arthur Fleck’s story set in the early ‘80s – a time when mainstream cinema was about the little people and big social message.

Beyond that conscious appropriation; encrusted atop, like a crumble, there’s layer two; media foreboding; cultural conversation that’s about something other than box office and merchandise tie-ins. But it’s not a serious commentary on a movie set 35 years in the past, in a fictional city, with only a broad brush critique of social inequality on offer. And it’s not a serious movie either; it’s a film that wears the clothes of a Scorsese character study to maintain a serious and respectable veneer. It’s a film not about now but then, and a then that only truly existed on film.

Joker puts on a good show. In places, when Phoenix is in his pomp – an unnerving and mesmerising sinewy carcass raised on the sour milk of human cruelty – an amazing show, but it’s all a set of magic tricks.

The film draws on themes that were white hot as the troubled ‘70s rolled over into the decadent ‘80’s. There’s wisps of Wall Street avarice, a Paddy Chayefsky-like interest in media and its will to exploit, urban breakdown and dislocation, and blue collar rebellion. Phillips will argue these are contemporary concerns of course, and so they are, but Phoenix’s Gotham is like a distillate of a social critique from a generation ago. It’s old hat – much like its period backdrops and old school, low rent aesthetic.

Phillips has made a sad and troubling movie that just about stands alone, despite its needy flirtation with franchise elements like Batman’s origin story. But those nods to the wider universe, so heavily signalled as dead ends in a film ostensibly constructed as a one-off, are a reminder of the game that’s been played here.

Recognition, both of characters, situations and their consequences, has been a central plank of the strategy to entice mainstream audiences to movies for many years now. Joker knows that its status as a property trumps secondary considerations like art and originality, but it purports to offer both under the safe and reassuring DC umbrella. Unfortunately, it’s impossible for lovers of film art to forget that Hollywood’s obsession with IP exploitation, catalysed by no less a title than 1989’s Batman, is the reason we’re now adding classic-flavoured syrup to franchise films rather than flocking to originals; the classics of tomorrow.