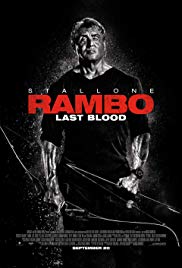 Warning: This review discusses aspects of the nonsensical plot.

The makers of this second legacy sequel to the 1980’s action franchise have decided to be brave like the titular mercenary; they told a story as though it were playing in John Rambo’s mind. It’s quick, populated by fleeting images of death and destruction, it’s senseless, dehumanising, nihilistic, humourless, cruel, and psychologically taxing. The ingredients for a high octane revenge thriller are all there, but the humanity is not.

What’s mystifying about the approach taken here, much like Stallone’s Expendables, is that it’s nostalgic in name only. It’s the character you know from the ‘80s, in a movie that has conspicuous modern difficulties; namely an inability to develop character, pace scenes, and emotionally involve the audience. This movie rattles through its beats in a perfunctory, mechanistic fashion, never pausing for contemplation or imagination. The script is blunt and literal, the staging witless and messy. And attempts to manipulate the audience into caring about the characters fall flat, because the requisite care in developing them has not taken place.

Last Blood leaves you with a lot of questions. How did Rambo get involved with his adopted niece’s family? Why does a trained soldier, who defeated the Burmese Army, the Vietcong, and the Soviet Union single-handedly, walk into a confrontation with a group of Mexican drug dealers and sex traffickers without a plan? Had he not done so, had he shown the forethought and strategy he employs later, after being concussed for four days, he might have saved the niece he is later obliged to avenge.

Why does a man who retired to his family’s Arizona Ranch to live a quiet life, and forget about the Vietnam War, build a shrine to that war in the form of a complex series of tunnels, under his property? It’s as if he anticipated the precise circumstances, unlikely though they are, that take place in this movie. When the fired-up Mexicans come looking for him, in the ending borrowed from Skyfall, he has the precise infrastructure required to defeat them. Otherwise it would’ve been a turkey shoot in a ranch house.

The real-world explanation for these anomalies is that Last Blood is a lazy and poorly executed sequel, that compromises on the series’ historic aesthetic to appeal to an imaginary constituency of action fans interested in 70-year-old protagonists, thereby satisfying neither generation.

There was an opportunity here to say goodbye to this iconic character by crafting a movie that had psychological nuance, emotional depth, and gratuitous violence. In the end they settled for gratuitous violence, and that’s not anything like enough.

Certificate: 18 for blowing your one chance to use your skills and rescue your niece, getting though Mexican customs without a passport, and forgetting to grow your hair out.