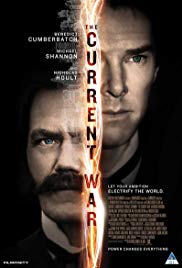 Though it’s two years old – delayed as the celluloid casualty of producer Harvey Weinstein’s predatory libido, The Current War was nevertheless produced in an era when streaming services are in the ascendant at the expense of traditional big screen distractions. It’s an historical drama about Thomas Edison and George Westinghouse – a couple of 19th century entrepreneurs vying for supremacy in the untapped electric light market. But with things going as they are, this middlebrow adult-orientated fare, conspicuously calibrated for the big screen, already feels anachronistic.

Watching it move at a lick, positively lit up by kinetic and consciously arty direction from Alfonso Gomez-Rejon, there’s the sense that all concerned were under pressure to justify a theatrical release, and that a pseudo-documentary aesthetic was thought to be an invitation not to exhibit – rather consign the material to online content hell. Perhaps Gomez-Rejon felt a responsibility, depicting one of the founding fathers of the motion picture, to showcase the artform’s potential. Whatever the reason, The Current War is highly stylised and edited for pace, ensuring that even the most obtuse teen will be carried along by the bombastic staging and heightened performances.

Perhaps there’s a danger, like unregulated alternating current, that a treatment like this denies the story opportunity to breathe or for character nuances to come to the fore. Benedict Cumberbatch, channelling Steve Jobs to find Edison’s heady mix of celebrity, creative zeal and family neglect, certainly isn’t vying to win an Oscar – content to power on through as a bit of a one-note arsehole. Michael Shannon plays Westinghouse as a guarded figure conditioned by his civil war past; a characterisation that works better given the film’s limited pauses.

The Current War works well enough; it’s a story full of fascinating titbits, such as the connection between Edison and the first electric chair used for state executions, and it can boast plenty of personality and an emotive score, which is always to be celebrated. One wonders if we’ll see many more like it in the years to come, given the expanding creative ghetto that separates cinema from home entertainment, but at least this found its way to the local multiplex despite its producer’s best attempt at sabotage. Let’s hope the 2020s finds a place for this stuff – after all, if audiences remembered that the dark and your concentration adds values to visual storytelling – well, that would be a lightbulb moment.

Certificate: 12A for spousal neglect, a dead horse, and Nicholas Hoult.