Film Review: What We Left Behind – Looking Back at Star Trek: Deep Space Nine 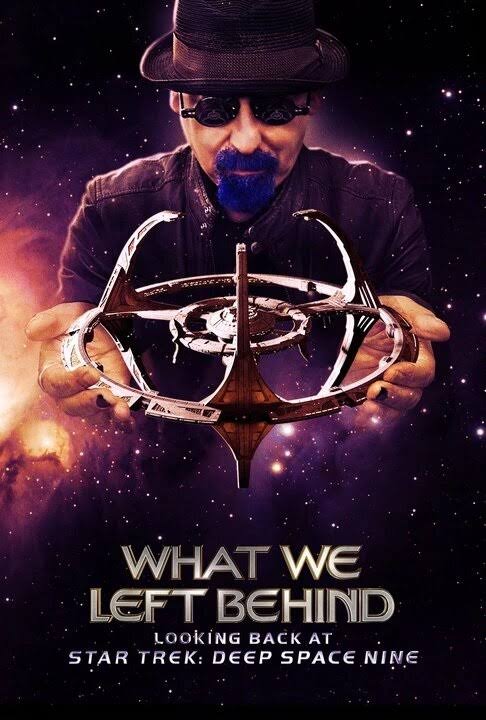 Much delayed, as crowd funded projects often are, the belated release of Ira Steven Behr’s Star Trek: Deep Space Nine retrospective couldn’t be better timed. If Trekkies ever needed reminding that their thoughtless and thought terminating rejection of the so-called black sheep of the Trek family was imbecilic then and, in the age of Star Trek: Discovery, indefensible now, this is the moment.

Thanks to ten years of on screen atrocities committed under the Star Trek banner, rejecting the show as in some way antithetical to Gene Roddenberry’s philosophy, or out of step with what Star Trek should be about, feels like a joke darker than anything this frontier, later war saga, ever produced.

Perhaps Trekkies weren’t ready for the station drama when it debuted in 1993. The documentary suggests it suffered a squeeze, sandwiched between the outgoing TNG and incoming Voyager. Maybe they never took to the show’s carefully cultivated moral ambiguity, its conflicted and conflicting characters (half of whom were non-starfleet, neatly adhering to Roddenberry’s “no conflict between humans” edict).

Fuck, maybe the audience, spoon fed happy-go-lucky philosophers and explorers and self-contained and eloquently cauterised morality plays, simply didn’t like the part-serialised narrative (the concurrently running Babylon 5, namechecked here but no more, was completely serialised over 5 seasons but no one seemed to mind). What’s clear is that objectively these reservations were shortsighted and thoughtless, and unfairly maligned what is, as of 2019, the most consistent and best written of all Treks.

Behr’s film is content to let the cast say, without controversy, that they’re the best of the bunch overall. Even Michael Dorn concedes Worf got his best moments on the sister series. But the film, a naked plea for CBS to embrace their neglected IP and spend millions converting it to HD, avoids any mention or criticism of the calamitous, continuity catastrophe that is Discovery and the ominous, just coming onto the horizon Picard series – Trek that looks back with one eye closed in contrast to DS9 that sought to take the franchise forward.

What’s palpable as you watch What We Left Behind is the sense of frustration amongst reassembled cast and crew that their work hasn’t been given greater recognition. But equally, though there’s broadbrush attempts at trying to explain it in terms of format, tone and brand saturation, this family reunion on film isn’t able or willing to dig deeper to explore what might have gone wrong in those crucial early seasons when a show’s reputation is forged and its audience locked.

The clue, manifest in the only cast member who refused to participate, presumably because no one likes to be reminded of their own failures, is Trek agnostic and styled “jazz musician” Avery Brooks. Brooks, to lay eyes, was badly miscast in a franchise which had previously relied on charismatic leads in those crucial lead roles. Coming off Patrick Stewart, DS9 needed a formidable presence at the helm. Instead, the producers went for an eccentric in the Shatnarian sense, who came pre-sold as an intense, attitudinoid from his work on A Man Called Hawk.

Behr, in a moment of frankness, admits the actor hired didn’t match the character written, and the show spent 3 years trying to make Brooks more comfortable (reseting his appearance to that of his previous character) and giving him scenes he could play with his signature over acting. But what no one’s prepared to say on camera is that Brooks’ performance was, by 20th century standards at least, a curiosity at best, a discombobulating shambles at worst.

Perhaps in the 24th century it’s more common for a man’s eyes never to stay still, as if he’s taking in the crew behind the camera as he’s playing a scene, or for the tone and modulation of your voice to bare no relationship to the dialogue vocalised – so it resembles a nervous kid reading out a poem in class, but this is what Niners had to put up with for 7 years. This is a truth that careful editing or voiceover drowning out Brooks’ dialogue cannot hide – not that Behr and his editor don’t give it their all.

Once Behr et al found a rhythm for Sisko that made the lead actor’s eccentricity and melodramatic tendencies either less conspicuous or, when attached to scenes of great anger and intensity, more congruous, Brooks, who allegedly considered leaving earlier in the run (not discussed here), was easier to watch. But it’s hard for any show, even a big ensemble like this one, to recover from the miscasting of its lead (see Discovery) and it’s reasonable to assume that some Trekkies, unable to relate to Sisko’s robotic personality, were turned off as the show struggled to establish itself.  Perhaps only the Prophets know if Brooks’ performance is something anyone could Behr in HD, but this Trekkie has his doubts.

The pleasure of What We Left Behind is watching the rest of the cast, who did deign to show up, get their due at last in a celebratory film. This is not an objective or critical account of the series, so fans hoping to know what really happened when Terry Farrell awkwardly left the show with just a year to go, or how resentful the cast were when Michael Dorn was unnecessarily foisted on them to renew interest in the series in what was effectively a second pilot (complete with retooled Sisko for those on Brooks watch), will be disappointed. It’s touched on, then swiftly, er, left behind.

Likewise, the film’s emphasis on renewing interest in the series, complete with 22 mins of HD upgraded footage, imposes a constraint on Behr – namely the inability to tell the show’s story in a more chronological fashion. The decision not to use old SD clips, as that might unbalance the look of the documentary, means less footage to draw upon for illustrative purposes. This results in the omission of classic scenes and episodes, and contributes to the sense the documentary lacks storytelling precision and focus. After all, talking heads – even singing heads are fun, but what those walking down the memory promenade really want are the greatest moments and the stories behind them.

Behr’s valentine to his work and the loyal fans that have stayed with the show over two decades – a figure not growing fast enough for anyone’s liking, is enjoyable enough then – and a show runner’s look back on his key decisions – his trials and tribblelations, is fascinating for any Trekkie. But those truly invested in this, one of the best and most neglected TV shows of the ‘90s, will one day hope for a more critical and interrogative examination, hopefully inspired by the re-release of episodes in full HD as the prophets intended. Or better yet, the Season 8 that begins to be plotted here, though hopefully with the absent Sisko still absent – the famed oddball still the focus of much theological debate over what all that erratic eye movement and random intonation actually meant.

What We Left Behind is available on Blu-ray and is playing in selected cinemas.

Certificate: 12A for footage of Avery Brooks - unconstrained by careful editing, Nog without his makeup, and no footage of the much promised Major Kira liquid enema scene featuring Odo.