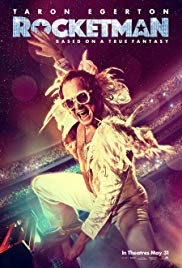 Cock of the Walk

Something incredible has happened and I need to tell someone – Dexter Fletcher has made a great movie. Sure he’s had a lot of practice, after Sunshine on Leith and those awkward scenes in Bohemian Rhapsody, but no one actually expected him to learn the lessons and do better. This fancy biopic about Elton John however, succeeds where something like Bohemian Rhapsody resolutely failed. It does so because Fletcher has finally understood, as Bryan Singer did not, that the key to successfully marrying an artist’s back catalogue with their life story is recognising the difference between running through the hits chronologically and using the songs to tell the story.

Rocketman,  like Bohemian Rhapsody, is a brand extension for a living artist (in Rhapsody’s case the surviving members of the band acted as musical advisors) but here it works because Elton John is around to stop the filmmakers from sanitising his life for the benefit of those who bought into the brand but were never interested in the man. Thus we get the fantasy Rock opera, with hints of Tommy; a magic realist jaunt; that celebrates the flamboyance, flaws (“I’ve been a cunt since the mid-seventies but forgot to stop”), and fornication of the subject, while giving the people what they want, namely the hits reimagined in a series of colourful, kinetic, well-choreographed set pieces.

Taron Egerton deserves a lot of credit for making this selfish and by all accounts insufferable prima donna into a likeable heartbreaking mess who somehow manages, with the help of his friend and collaborator Bernie Taupin, to produce some of the most memorable and affecting songs of the 1970s and early ‘80s. The trajectory may be a cliché, humble beginnings to superstardom, the hangers on and the heartbreak, the fall into mid-career lethargy and creative anaemia, followed by the big brash comeback, a reminder of that enduring star quality, but it’s not the story that matters it’s the way you tell it. What felt rote in Bohemian Rhapsody feels fresh and exciting here, because the story is delivered within energy, compassion, and a total lack of realism, befitting the mythological beast at its heart.

The fantasy approach delivers in spades; it’s a grand musical with a beat, rhythm and voice that comes through loud and clear. You may not get to meet the real Elton John in this movie, or even hear his voice, for Egerton does a great job of appropriating the singer and making the songs his own, thereby keeping the fantasy hermetically sealed; but you do get a stark reminder of why Elton John is so widely loved, and why like all great artists, his best songs will live forever. All concerned can take a bow. Extraordinarily, against the odds, they’ve earned it.