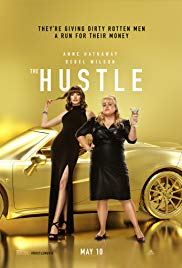 One of modern Hollywood’s greatest handicaps is the remake imperative. Why take a chance on a new story when you can carelessly regurgitate the old? Once upon a time, when the chronology of film had distinct epochs, remaking made horrible sense – like a car producer launching an up-to-date model. If your film was silent it was logical that you may want to employ new technology to make it a talkie. If you liked a movie from the Hays Code era, maybe shot in black and white, with what to modern eyes looked like quaint approaches to sex and violence and mannered performances, you might be tempted to update it for modern audiences. John Carpenter’s The Thing one of the very best examples of a filmmaker doing just that. But we’re post-censorship now, in fact we’ve gone backwards into an era of self-censorship. We’ve seen it all and heard it all. So what, you ask, is the justification for remaking a comedy from 1988?

If you’re the producers of The Hustle, it can only be that you watched Dirty Rotten Scoundrels, itself a modernising of 1964’s Bedtime Story and thought, ‘here’s a comedy that’s built on the traditional bedrock of men being funny, with women reduced to victimhood (the final act twist that undercuts said victimhood and challenges the characters’ gendered preconceptions not withstanding) – we should gender flip it! That’ll bring it into the modern era.’

Thus, with reckless abandon and lack of forethought, a movie that was just about perfect gets reshot beat for beat, setup for setup, without a single new idea. Sadly, the result attests to the fact that neither the new screenwriter nor lanky UK standup director Chris Addison, understood what made the 1988 film funny. Perhaps they should have watched it before vandalising it.

The Hustle is a fascinating case study; a window onto what’s gone wrong with mainstream American film comedy in the last couple of decades. That is plays like Dirty Rotten Scoundrels performed from memory by a company that last saw it twenty years ago is weird. That such a pub remembrance was printed and ended up in the finished film, astonishing. And then there’s the shift in tone from an old movie that presented as a representation of the real world with a heightened comic sensibility added, to the now familiar sketch comedy universe of American movies, where everyone, from the main cast to the supporting characters, is in on the joke and has comic names to match. Exhibit A, poor Dean Norris, who humiliates himself in a cameo as Texan millionaire Howard Bacon.

Consequently, you get the old movie you love, stripped of any wit or comic invention. These days it’s not unusual for comedians to improvise badly and for said “performance” to make it into the movie. But it’s galling to see Rebel Wilson copy a great moment of improvisation from Steve Martin in the last version – his struggle to remember the name of Michael Caine’s character who he’d briefly met on the train to the Rivera, and fuck it up.

The original scene works because, in a movie that was, as we’ve noted, grounded, it was comically overwrought – Anton Rogers’ bent police chief watching nonchalantly as Martin went through multiple incorrect permutations of “Lawrence Jameson”, before releasing the comic tension by giving him the correct name. Frank Oz, watching off camera, tapped Rogers on the foot on tell him when to end Martin’s misery, having timed the duration of the scene perfectly. In The Hustle Wilson struggles for a few seconds before being corrected. It’s a lifeless, underpowered reprise of the same joke. Another gag from the original, the Benson character having their hand stuck to a wall, is ruined by being telegraphed, whereas once it acted as the punchline to a low key conversation in which Steve Martin seemed to be casually supporting himself. One set of performers and their director understood what made these scenes funny, their successors didn’t.

It happens time and again in this remake, which may explain why, despite it being a beat for beat retelling with two added scenes as bookends, it’s 16 minutes shorter than the 1988 film. That 16 minutes was compromised of intakes of breath, little character based nuances, letting each comic setpiece play out in its own good time. The Hustle’s in a hurry to tell this story, perhaps to spare Anne Hathaway and Rebel Wilson’s blushes, and consequently it plays like a Wayans Brothers’ parody of Frank Oz’s movie.

No post-mortem would be complete without a note on how badly this remake misunderstands the gender politics of the original film. The story, as told the first couple of times, punishes the characters for their prejudices about stupid, rich women, by having them fleeced by a con artist posing as said type.

Never was it suggested by Caine or Martin their high end marks had their contempt because they were women, rather they were over privileged, cosseted types who were lonely and had more money than sense.

The Hustle follows the fashionable logic that if you gender flip the leads, a key part of identifying with a presumed female audience is that any discussion of men must be misandrist in character. So the rich men being ripped off here are crude misogynists, rather than the gender flipped equivalent of Dirty Rotten Scoundrels’ women – lonely, bloviating show offs. Hollywood’s imbecilic conception of feminism, then, is a world in which men must be punished for being men, and that’s how you address decades of female underrepresentation. Chris Addison should know better than to put his name to this kind of Twitter crud.

Ultimately, The Hustle is a mirthless run through a better film’s plot, that makes you want to seek out Frank Oz’s intelligent and well-performed progenitor, if only to see what the funny version looks like. “You can’t teach talent,” notes Hathaway in the agonising scene tacked onto the end credits. Not even, it seems, when you have the template on film.

Certificate: 12A for pop culture references instead of jokes, the existence of an elaborate facility in Anne Hathaway's home to facilitate a con she had no reason to think she'd ever be able to perform as it required a second person prepared to humiliate themselves,  and frequent references to Rebel Wilson's tits.