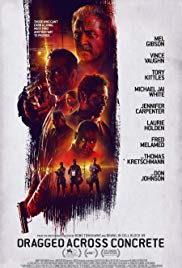 One for the Ladies

Did S. Craig Zahler’s approach to Mel Gibson go something like this? I don’t know.

SCZ: Mel, S. Craig – no time to explain, I directed Bone Tomahawk, a Western in which the characters get butchered, literally torn apart with their organs spilling – I have a thing about internal organs. Anyway, I understand your Hollywood rehabilitation’s going slower than expected. Am I correct?

MG: You are correct. I was in Daddy’s Home 2, for Christ’s sake.

SCZ: Well, the Jews who run the place have long memories, I guess.

SCZ: Right. So, what I want to do is Tarantino your career by casting you against type as an embittered, Dirty Harry-like cop whose career has stalled because he won’t conform to political correctness. It’s a hard boiled crime picture. We’re talking languid pacing, conspicuous movie dialogue; it’s a pornographic celebration of immorality. Basically an experiment to see whether I can make a punishingly long movie with no upside and no catharsis for the audience.

MG: You had me at “won’t conform to political correctness”.

SCZ: Thank fuck, because I wrote the part for you. So, I’m not Tarantino obviously, and maybe I don’t understand humour the way he does, or how to create a world in which my characters, despite being ugly and nihilistic, can still, by virtue of linguistic pyrotechnics and wit, be likable – but I’m not going for that cartoon world per se, more Jackie Brown, y’know?

MG: Well that was his best one, if you ask me.

SCZ: Right. So you’ll be partnered with Vince Vaughn. You’re tough but undervalued detectives. You’ve been held back, he’s a kindred spirit. You do a bust, which involves a real bust – I mean, a half-naked woman, but I’ll come back to those, and you’re filmed by some arsehole assaulting a Mexican. So you’re suspended without pay. You and Vince decide to get rich by following one of your character’s underworld leads and crashing a gold billion heist. That’s money for you and your daughter. Your wife’s got MS and the daughter’s bullied by blacks.

SCZ: Yeah, but get this – it’s a tailor fit for you, man. For a start, the chicks in this movie are largely mute and decorative and I make sure they’re either fucked, implicitly vulnerable – like there’s a scene in Act One where you force this girl to stand under a fan while she covers her tits, and there’s that underlying rape threat there, but you don’t act on it – you show restraint. But later, Dude, that’s when I ramp it up. I introduce a woman who’s struggling to go back to work after maternity leave – who actually doesn’t want to go to the bank that day because she can’t stand being apart from her baby. But her boyfriend forces it – she goes in and, bang, gets fucking shot in the face. I just introduce her so the audience can get to like her before I have her fucking hand shot up and head blown apart by a psycho with a machine gun.

SCZ: Right, but it gets better. There’s a bitch in the bank who’s baked the returnee some cupcakes; she’s child-like, stupid; and the robbers kidnap her, strip her half naked when she wants to piss, and shove newspaper up her cunt. Not only that, they tell her to squirt.

MG: It’s fine, man – I’m the same. Wait, wouldn’t it make more sense to have the mother be the kidnap victim – then you could really invest in her before, I’m guessing, she’s brutally and senselessly killed?

SCZ: Yes, she’s forced to stab Vince by the gang, and you shoot her in retaliation while she’s still naked from the waist down. You’re right – but I can’t be fucked to change it now.

MG: Well, women are interchangeable – the audience won’t give a fuck.

SCZ: Right. Oh, and the daughter you’re doing this for – I get the audience on side by showing her bullied by blacks as I said, and having your wife articulate the audience’s fears by saying, “I wasn’t racist but having lived amongst them…” etcetera. Oh, and the Mother fears they’re gonna rape her baby.

MG: Well, they would.

MG: This sounds terrific, but isn’t it kinda bleak, and won’t the libtards feel threatened by it? I mean, you haven’t given them any outs like Hollywood usually does.

SCZ: Ah, well, I’ve framed it so that it starts and ends with a black character, who, like you, has a family to provide for.

SCZ: Yeah, he’s hardly in it, but he shoots you at the end and gets all the gold, so it ends on an aspirational note – you know a big TV, a house by the ocean. The American dream.

MG: What does he do, this character?

SCZ: He’s a thief – just out of prison – but an honourable crook. He enables this murderous gang of brutal robbers, but he likes to keep his word.

SCZ: In a movie with no heroes, that’s really about seeing how amoral a story can be, yeah.

Certificate: 18 for smearing the screen with hate, violating a corpse, and rampant misogyny.