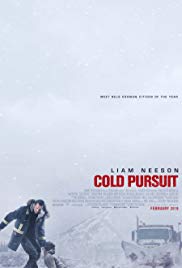 Until Liam Neeson starting promoting it, the most interesting thing about Hans Petter Moland’s remake of his own movie, was why he bothered. Surely the chore of retreading old snowy ground would induce a certain lethargy? Cold Pursuit, its silly title a poor substitute for the original’s In Order of Disappearance (congruous with the film’s conceit of marking its dead with intertitles), does feel subdued – as if all the characters had to conserve their energy in the bitter cold environs. But before we get into that, there’s the meta commentary around it’s release.

Neeson, it turns out, drunk on his own masculinity and sectarian-informed hate-filled reductive view of humanity, once went looking for a non-descript black man to beat to death in revenge for his friend’s rape, searching for someone fitting that generic description. It’s the kind of thing one the villains in this movie would do – fuelled as they are by a certain pitiless psychopathy. Still, it enlivened a conversation around a blackly comic thriller that would, on account of its mediocrity, have been ignored otherwise.

What strikes you, watching Cold Pursuit, other than how cold it is, is how solemn and serious Neeson’s anecdote is when framed around the revenge theme in a movie as glib and self-consciously distancing at this one. It’s a movie that holds you at arm’s length, never daring to be animated enough or emotional enough to get the adrenaline pumping. The violence is matter-of-fact, the humour deadpan. What’s aimed at but not quite achieved is a fusion of Coen Brothers’ whimsy and Martin McDonagh-style black comedy. In short, if Neeson’s reminiscence leads to early retirement, he’ll have died on a hill for very little indeed.

If we’re grateful that Neeson’s quest to avenge the death of his son, inadvertently pulled into the orbit of local drug dealers in a Colorado ski town, is complicated by a turf war between said dealers and their Native American rivals, and a light touch delve into the dynamics of each crew, we’re ungrateful that at no time does this progress beyond sub-Tarantino brinksmanship and comic chat.

It’s lip curling in places, and Moland extracts good value from Nordic-proxy locations, but there’s not enough brutality or absurdity to make Cold Pursuit anything other than evocative of better movies. Leaves you cold? Please, this isn’t the film column in the old News of the World.