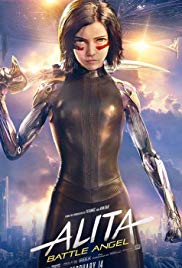 While the dollars printed to meet Titanic’s budget were still wet, there was talk of James Cameron adapting Yukito Kishiro’s manga series based on the adventures of a futuristic cyberpunk cyborg for the big screen. Back when, with Cameron’s reputation at its peak, this was a tantalising prospect – a return to the tech noir action territory that made his name. But as the years rolled on and his attention shifted to waterlogged sequels to his hippy-dippy megahit, Avatar, it’s clear his heart was no longer in Alita, nor his head. Thus, the movie looked to be as dead as the anticipation for those Avatar sequels.

You can decide for yourselves what passing his script to Robert Rodriquez, who can’t scrape together $20m to make Machete Kills in Space, but has somehow, with Cameron’s patronage, being handed $200m for this blow out, says about Cameron’s interest in the material. Does he believe the famous low budget auteur to be a pliant stand-in or a vibrant and kinetic filmmaker with a sensibility similar to his own who’ll make a movie not dissimilar to the one he would have made, albeit with a Mexican flavour? It’s likely Cameron doesn’t care about anything at all except Avatar now, certainly not enough to insist Rodriquez kept a tighter grip on his former passion project.

Alita’s a visually exciting and pacey futureshock with plenty of visceral fight scenes and an intriguing mythology that ends just as it’s getting interesting. Rosa Salazar, playing the titular cyborg, rendered Disney-eyed, thanks to mo-cap technology, gives the story of a bot saved from the scrapyard and keen to discover her former identity, purpose and true enemy, personality and passion – thereby elevating this above cold and indifferent fare like the similarly themed Ghost in the Machine.

Unfortunately, Rodriquez, handed all this cash, is obliged to defer the meat of the story and its promise to a sequel that, thanks to the non-marketing efforts of Twentieth Century Fox, will never happen. The canvas is colourful and detailed, the characters likable, Christoph Waltz’s dead-eyed inventor notwithstanding, but after a promising first act, the film gets bogged down in world building, punctuated by setpiece fights that advance the story not one inch.

There’s a kind of arrogance in assuming an audience will return for sequels when the hard work in building a self-contained and satisfying first movie has not been done, but in fairness to Rodriquez, he’s made a film that conceptually dates from another era – an era in which an infallible director was attached. Thus, a much delayed ‘90s blockbuster stumbles in a modern marketplace indifferent to its charms. Still, if it’s any comfort Robert, Alita’s a lot more fun than Avatar and is in no danger of outstaying its welcome.

Certificate: 12 for a coded reference to sexual maturity, a robot that looks like Sam Worthington, and Ed Norton.