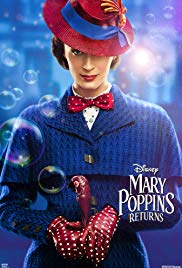 Mary Poppins Returns marks the moment Disney ceased to become a movie studio in the traditional sense. Pastiche is their game now – cannibalising and regurgitating, in the most perfunctory, mechanistic way possible, their considerable cache of 20th century hits.

Mary Poppins, a joyful, musical celebration of childhood and imagination, overseen by Uncle Walt himself, who died happy that he’d birthed one of the best films of its kind, has fallen prey to the very thing the Julie Andrew’s blockbuster rallied against – adult cynicism and the preoccupation with making money.

We’ve always known Walt’s minions were hypocrites you understand, but this unwanted and unnecessary sequel, debuting 54 years after the first, is such a conspicuous invocation of a better movie, and so fundamentally lacking a creative spur of its own, that its cash grab credentials are undeniable.

Like all disguised remakes the central trade-off is between bare faced nostalgia – the elements you recognise and through grinding repetition, indelibly associate with the brand, though your childhood brain never cared for such a crude word, and retelling the same story with new characters and variations on old situations in a bid to replicate the engagement of yesteryear in a young audience who doesn’t know the original.

Rob Marshall’s film finds an in-story proxy for this formula – adults, the now grown up Banks children, who’ve forgotten their childhood adventures but are mighty glad to be reminded, and the new Cherry Tree Lane kids who are experiencing the wonder for the first time. Except, sadly for them and us, their Dad and Aunt had it so much better – not just in terms of the songs that spontaneously erupted whenever someone wanted to talk about anything, but the nanny that came to look after them.

The new songs by Marc Shaiman have little personality, which in turn means the movie doesn’t either. They’re constructed around the same vaudeville themes as the originals, with accompanying orchestral bombast, but the hooks aren’t there, and consequently the architecture of the flick, the same but different, dangles in front of your face like an unspooled member. Emily Blunt’s Mary, meanwhile, is a stern and curiously haughty disciplinarian, lacking Julie Andrew’s warmth. As the movie continues, familiar beats abound, the thought crowns that maybe it only exists as an exercise for film students in picking out the original’s virtues – great casting, great songs.

What’s apparent watching Mary Poppins Returns is how risk averse the production is, when a fresh take might have saved the film from history’s inevitable verdict of second division sequel with a new cast – an honour it will share with Splash Too.

The movie’s overarching plot, heartbroken widower Michael Banks tries to find the share certificate that will save the family home from repossession and evil banker Colin Firth, vomits up its one interested thread – the idea that the villain might have an animated proxy in the magical world who’s working the scheme from the childhood end. But instead of developing a point of differentiation between this movie and the original, namely the idea of a bleed from Poppins’ fantasy world to the mannered milieu of flesh and blood, Firth’s animal-self is cast as a subconscious echo of the events unspooling elsewhere – like a kid who overhears Uncle Delaney creeping into his sister’s room and dreams about her being savaged by a bear.

Thus, we get a sequel that, though tonally faithful to the original, and performed with the requisite theatrical earnestness; lots of cutaways to wide-eyed and happy faces; lacks its vitality. As a machine designed to rework old memories, it’s highly effective, but a movie has to be more than retooled iconography, it must have a life of its own. Some will enjoy how old fashioned it feels, how unapologetically sentimental, but everyone else will sense something creaky about this out-of-time middle class fantasy in which sound financial investment, good connections and inherited property win out. And this is supposed to be life-affirming. Little wonder that Van Dyke replacement Lin-Manuel Miranda is a gaslighter

Certificate: U for being unable to lure Julie Andrews to appear and having to settle for the star of Bedknobs and Broomsticks instead, a weird cold open, and Colin Firth being the best thing in the movie.