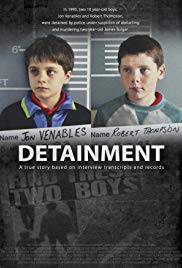 Out of the Mouths of Babes

The last great moral panic in Britain, in the 20th century, was arguably the 1993 murder of the toddler James Bulger. When the nation learned his killers were two delinquent ten year-olds, Robert Thompson and Jon Venables (the order’s important and often inverted), who’d snatched the two-year-old from a shopping centre in Bootle, walked him two and a half miles, before torturing, sexually assaulting and bludgeoning him to death with items including bricks and an iron bar; their coup de grâce being to leave Bulger’s body on railways tracks where it was subsequently cut in half; tabloids and public alike were apoplectic.

This was a terrifying window into a lawless, immoral universe, in which children, unchecked by any of the civilising imperatives or controls we hold dear as a society, and rely upon to keep us safe from one another, had callously murdered another child, seemingly with a degree of dissociation and brutality that struck primal fear into parents everywhere.

Who was to blame? The press imagined that violent video nasties, like Child’s Play 3, which one of the killers had allegedly watched, might have had a warping effect on their psyches – a reductive and seductive argument that remains easier to understand and indulge than the liberal alternative – that Thompson and Venables were brutalised and wayward on account of their dysfunctional and unhappy domestic lives. The chilling corollary of the idea that killers are made not born being all that separated Thompson and Venables from similar children, maybe your children, was circumstance and opportunity. Better to call them evil and turn the page.

Vincent Lambe’s short film, Detainment; a clinical title that foregrounds its attempt at cold objectivity; revisits the case by dramatizing the police interviews of the suspects, their ashen faced, bewildered parents in tow – interviews conducted by visibly disgusted detectives, struggling to remain composed in the face of an unprecedented situation.

Lambe’s strategy, recalling the recent adaptation of the transcribed conversations in the Tony Martin case – the Dorset farmer who shot and killed a burglar, is to let the historic record speak for itself. Background, as in the Martin film, is minimalist and offered without notes in the margin. Thompson and Venables’ morbid route is shown in grabs. The 35 members of the public that saw Bulger with his killers but didn’t intervene are generously omitted, their lack of nous left on posterity’s cutting room floor. The 3 that showed a greater interest, a pensioner who questioned the injury to Bulger’s head but despite establishing the boys weren’t friends or relatives of Bulger, left it at that, and a mother who came within a wisp of taking Bulger into her own care, only to be frustrated by another woman who wouldn’t look after the Samaritan’s daughter because her dog didn’t like children, feature in tragic vignettes. Why didn’t someone take a distressed and notably injured boy from two shifty kids? Why didn’t anyone call the police? An understandable failure of imagination? Civic neglect? The film has no answers.

It would, of course, be preposterous to imagine that Lambe could supply any. Doesn’t our collective humanity rest on these being inexplicable actions? But whereas the Tony Martin film imputed blame for the crime shrouded in the fog of tabloid commentary and public chatter – bringing small but important facts to light that would assist all but the most blinkered in their understanding, Detainment omits the least known aspects of the case – the orifical violations of the toddler, and skirts around the sexual element (and perhaps part-motive for the crime) which remained taboo at the time, on account of the killers’ age, and is clearly too difficult to talk about now. Lambe, one assumes, was hamstrung by the fact that the testimony in question would have to be performed by child actors, opening him up to charges of exploitation and indecency.

What we crave in this kind of unfiltered (if it is unfiltered) retrospective – the cinematic equivalent of a cold case review, is more light than heat – a new insight that will aid understanding and provoke reflection on the causes of such crimes. But Detainment gives us the killers cold, perhaps afraid to dig too far into their background, lest humanising them becomes apologising for them. We have no more information that the police of the day, and consequently no sense of how two bored and, the evidence suggests, libidinous pre-teen truants crossed the line into abduction and murder.

What we get are two great performances from young actors Ely Solan and Leon Hughes, having to navigate highly difficult material. The film’s thesis, born of the original interviews, is that Thompson – aggressive and glib under questioning, was the leader of the two; brushing away accusations of sexual assault and murder as if he were being accused of breaking a newsagent window, denying everything. Venables, in stark contrast, is sensitive, frightened, and ultimately remorseful – a fact one can read either as a greater understanding of the crime’s implications or an affirmation of responsibility. Venables’ scenes are distressing; Thompson’s chilling, and the mixed emotions one feels – disgust and concern, were presumably shared by the poor officers attempting to unpick this most savage of murders.

It will ultimately be left to the psychologists and commentariat to decide whether it was inevitable or simply probable that the boys we see here would end up where they have. Thompson – framed by his own words as cruel and sexually curious – albeit as part of a noxious cocktail of aggression and psychopathy, has not reoffended (which an optimist might argue is the same as being rehabilitated), ultimately settling into a gay relationship. His level of remorse is unknown. Venables, whether coerced or not, has emerged as a psychosexual deviant enslaved by his past – subsequently convicted for child pornography; an uncomfortable and dangerous echo of the circumstances around his life defining act of barbarity.

Detainment leaves us to ponder these Freudian questions, as well as nature versus nurture, burgeoning toxic masculinity, pre-pubescent confusion sans education and guidance – content to supply the raw material. Putting us in a room with the killers makes detectives of the audience. The frustration for many will be the impossibility of reverse engineering the unspeakable when confronted with the unthinkable.

More information about the film and upcoming screenings can be found at: http://www.detainmentfilm.com