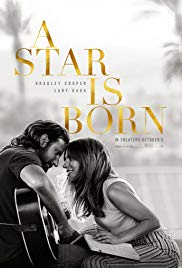 The Edge of Glory

Every generation, Hollywood has decreed, deserves their own version of A Star is Born, the rags to riches fantasy with a tragic corollary, that appeared in 1937, 1954 and most recently 1976. The coda to the 2018 version is like a mini-manifesto for the project. Sam Elliot talks about all music being the same 12 notes; it’s how you see them and what you do with them that counts. It’s the raw talent and feeling that waitress and occasional club performer Ally possesses that captivates alcoholic country star, Jackson Maine, and it’s the opportunity to make a grounded, naturalistic take on a familiar story that was the presumed lure for his counterpart, debut director and star Bradley Cooper.

He’s made a low-key, emotionally resonate movie; a great concert film that in keeping with the documentary aesthetic it sometimes appropriates, underplays the relationship between a troubled Cooper and the sweet and sometimes evanescent Lady Gaga. Consequently, it has weight and depth, and that, as Cooper seems to intuitively understand, adds heft to the story’s melodramatic complications. We know how it ends, but it hurts this time around, perhaps because Ally’s wide-eyed hunger and Jackson’s pain are so well understood by both performers, as to make the tragic end to their relationship that much sharper.

Fundamental to the movie’s success is Gaga’s take on the ascending starlet. The most recent actress in the role, Barbara Streisand, seemed somewhat aloof and hived off – like a star playing a star. But Gaga’s Ally, though wet, is tangibly burdened by imposter syndrome. That makes her a sympathetic audience proxy; more so because she’s playing against an established movie star with the requisite confidence in close up. Cooper’s musical stylings are so assured that you occasionally have to remind yourself that he’s the imposter, not the successful singer-songwriter playing the wannabe.

This is a psychologically astute version of the story, perhaps the best of the four, that understands the key to Ally’s confidence is her affinity with Maine; a bond that due to his self-destructive nature eventually becomes a liability to her career. That’s the tragedy for both characters. One could argue it’s not a progressive take; the industry portrayed is still very much a man’s world, built on male patronage, where image, particularly for female performers, takes precedence over personality and unfiltered self-expression (not a problem Maine had to grapple with, we sense), but acknowledging that truth is part of the film’s commitment to realism over Hollywood fantasy. That success has its price has always been the central message of A Star is Born; there’s no such thing as a fairy tale ending. Perhaps this movie should be played before every talent show final, just to manage expectations.

Certificate: 15 for Gaga breasts, Alec Baldwin, and a concert where no one has a mobile phone.