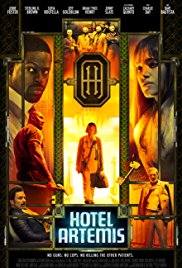 Hotel Artemis is a real head scratcher. This isn’t because it’s a meticulously crafted thriller, resplendent with characters sporting complex motivations, secrets, and finely entwined back stories. Rather, it’s been thoroughly muddled in conception. It’s likely that Drew Pearce was aiming for a futuristic spin on the hotel from John Wick coupled with the claustrophobic histrionics of The Raid. But at some point in the scripting process Drew forgot about structure and concept and became enamored with the inconsequential back stories of his underdeveloped characters.

We’re asked to care about Jodie Foster‘s nurse, her tragedy, and how she came to be caring for murderers and thieves in this curious members only hospital, a hospital that’s supposed to be a myth to outsiders, even though there is a sign on the roof of the building it resides within, emblazoned in neon, visible to all of Los Angeles.

Is this enough to hang a movie on? Sure doesn’t feel like it. There is the germ of a great high concept here; criminals converging in an Art Deco hotel, where weapons are forbidden, and all the guests have is their dysfunctional personalities and grievances – perhaps agendas. For once, a more predictable rendering of this high concept thriller might of been more desirable. As an audience we like to be surprised, we’re grateful when a writer and director refuse to hit the obvious beats. But if you’re not going to follow through on the story suggested by your set up, you better have a better idea.

Hotel Artemis is set up to be a futuristic siege drama, in which a bunch of criminals fight off an insurgent mob, vying to get inside to retrieve a pen of stolen diamonds. The notion of a conman, thief, assassin, wounded cop and old woman, fighting off L.A.’s most feared violent mobsters while bound up inside a near impregnable hospital for deviants like them, is a good solid B-movie idea. In skilled hands it could have been a funny and exciting Battle Royale with a futuristic twist. Unfortunately, Drew Pearce has chosen instead to spend much of the movie’s running time skimming over the tensions between the hospital’s reluctant residents.

There is just enough time to give Foster’s one-dimensional character a thin redemption arc, and emancipate another character who we know even less about. But at every turn Pearce passes up opportunities to develop his strongest ideas. A relationship between a thief and a beautiful French assassin rekindled in extremis goes nowhere. Foster learns a mobster on her operating table is responsible for the death of her son, but there is no revenge played out, rather the honour of killing Jeff Goldblum falls to a character with whom he has no relationship and no history. Consequently, it’s fairly meaningless. Goldblum’s son, keen to prove himself, and therefore motivated, one might think, to take the hospital at all costs, never gets the opportunity to complete that thought.

In short, Hotel Artemis never delivers on its promise, instead content to wade through a mire of underdeveloped plot points and underwritten character relationships. You’re left wondering what it’s really about. I don’t know. Such was the lack of emotional and psychological engagement, I checked out long before the end.